After a fabulous Jaisalmer visit, we knew that Bikaner wouldn’t be as exciting or fun. Nevertheless, we were curious enough about it to head there. After saying numerous goodbyes to all our Jaisalmer friends, a couple of whom even came to the bus station to see us off, we boarded a late morning bus to Bikaner. The ride, a distance of about 330kms, was comfortable enough but at Bikaner’s station road we got stuck in a major traffic snarl, which lasted nearly an hour and a half. By the time we got to Harasar Haveli, our stay for 2nights, it was almost 9pm and the newer parts of town wore a deserted look¦

Bikaner was founded in the late 15th century by Rao Bika, the second son of the founder of Jodhpur. He had no hopes of inheriting Jodhpur from his father so he set out on his own and 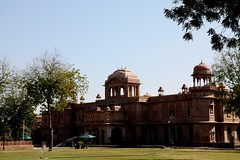 carved out a kingdom for himself. It gained prominence as an important stopover in the trade routes heading towards the Gujarat ports. Although, Rao Bika’s original fort slowly dissolved into ruins, Bikaner’s successive rulers added to the city’s charm with palaces and a large fort complex. These are its most visited attractions today. We hired a rickshaw for the day and started with a visit to the Lalgarh Palace in hopes of a ‘royal’ start to our tour of the town. But since being converted to a heritage hotel, visitors are only allowed to view the palace from the outside and visit the attached 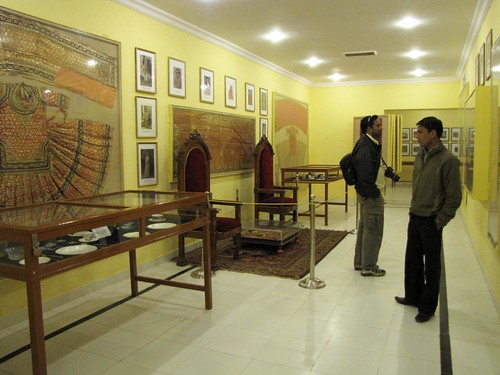 museum as a consolation award. We were totally bummed at this snub but couldn’t do anything about it except comply. The palace looked gorgeous and we stood out in the sun wondering what it must be like from the inside. This was our first glimpse of red sandstone structures, which looked beautiful but a little dull, compared to the fiery, glowing yellow sandstone of Jodhpur and Jaisalmer. The museum, Shri Sadul Museum, was interesting but nothing spectacular. It depicted the lives and times of the last Maharaja Shri Sudul Singh and his family, which included his daughter, Maharani Karni Singhji, who is the founder of the museum. The photographs displayed here seemed more focused on her than any other person of the family.

Our next stop was at the city’shighlight: Junagarh Fort. We opted for an English audio guide, which cost us Rs.150 each including entry into 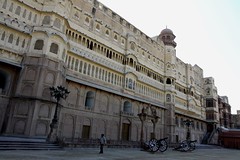 the fort and camera permits. And just as expected, it was a magnificent fort, with palaces and courtyards, all lovingly maintained. Commissioned by the sixth ruler of Bikaner, Raja Rai Singh, in the late 16th century, the fort complex is simply a wonder of intricate red sandstone carvings. But it’s not just the exteriors with their lattice-work that are gorgeous, the interiors too have lavish halls with exquisite murals. One of the nicest Mahals is Anup Mahal, the Maharaja’s private audience hall, which is an extravaganza in red satins and silks with gold thread brocade work on carpets and cushions. The gold-colored murals on its pillars were lovely and simply added to the richness of the room! There were several such rooms in the complex that were absolutely breath-taking. It is a huge fort so it took us nearly 2hrs to complete the tour with plenty of photo-breaks, of course!

Later, we took a lunch break (sandwiches and soft drinks) at the complex’s cafeteria and then spent a few minutes browsing an art gallery and shop showcasing local artisans. While exiting the fort, we called our auto guy and he showed up a few minutes later to whisk us to our next stop. Thank God for cellular technology!

Just like Jaisalmer, Bikaner’s merchant families too built gorgeous havelis to showcase their prosperity. However, unlike the former, Bikaner’s havelis 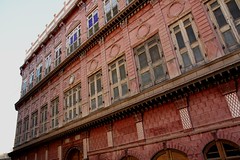 are not really open to the public for viewing, nor are they in any shape to be viewed. Most of these gorgeous properties are under family disputes and therefore not maintained or cared for. Our auto guy brought us to a couple of them, which we could gape at from outside. They were clustered along a narrow street and their gorgeous facades reminded us of the pretty buildings and streets of Europe. However, just round the corner, the sight of defecating stray animals and urinating men quickly dispelled all notions of Europe from our minds and we hurried away. Sigh! Bikaner’s old city lanes host a few Jain temples that are old and popular on the tourist circuit enough to make them our next stop. As our auto guy wound his way through the narrow streets, Madhu spotted a traditionally dressed local with a really long mustache sitting around. But before he could ask the auto guy to stop, the auto had gone several meters ahead and the mustachioed man disappeared from view. So we continued on to the Banda Shah Jain temple and paid our respects there. It was a pretty temple but not as lavish or grand as some of the others we’ve seen elsewhere in Rajasthan. The temple priest, too, with his commercially inclined ways, irritated us enough to want to leave quickly and forget about the other Jain temples in the vicinity.

But Madhu didn’t forget the mustachioed man he had glimpsed earlier on. When the auto guy looked hesitant about driving back through 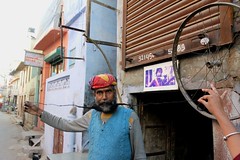 the congested lanes in search of a mysterious, unknown man, we set off on foot. To our delight we found him quite easily, still lounging by the road side. On close inspection we realized that his mustache was so long that he had rolled it in from either sides and attached it to his cheek with hairpins. When Madhu asked his permission to take a picture, he beamed at us, unrolled his mush, made me hold one end of it while he held the other and happily posed! We soon learnt that he is a, sort of, amateur ‘mustache grower’ and even participates in competitions relating to it. He was a very friendly chap and we had a great time chatting with him and another random chap who showed up and joined the conversation, over cups of chai. It was our best Bikaneri experience, for sure!

Well, at least it was my favorite experience. For Madhu, it turned out to be second-best compared to our, or rather his, visit to the unique Karni Mata temple! It was also the last stop of our Bikaner auto-tour¦

Almost 10 to 12yrs ago Madhu had watched a documentary on the National Geographic channel dedicated to this temple’s unique trait: its resident rats!!!  Since then, he has been looking forward to paying a visit and therefore, was all excited on our 30km auto ride to the village of Deshnoke, where it is located. Legend goes that Karni Mata, a 15th century sage and official deity of the Jodhpur and Bikaner clan, requested Yama, the God of death, to restore a loved one back to life. When he refused, she defiantly reincarnated the dead soul, and a few others of his family, as rats. Since then rats have been welcomed and nurtured in this temple dedicated to the sage as reincarnations of our departed friends.

I’m not very brave when it comes to 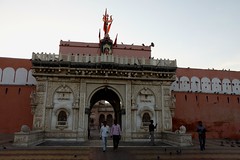 creepy-crawlies, and unfortunately, rats fall in this category! So even though I had resolved to forget all fear and make a grand entry into the temple premises, all my pretenses fell away when two of the furry ones zipped right across my path. I nearly screamed (but caught myself in time) and requested Madhu to drop me back outside before I created a scene amidst the many devotees who were walking around without a care in the world! Then I spent the rest of the evening watching the temple entrance from a safe distance while security guards and the auto driver laughed at my cowardice and Madhu walked around the temple premises completely entranced by the sights …. er, rats!!

Amongst the hundreds of rats that seem to occupy the temple grounds, there is an albino one, which is considered to be a lucky one to sight, as he is unique amongst his comrades. Madhu spotted him almost as soon as entering the temple 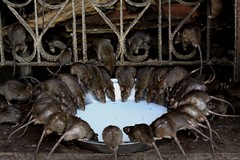 and took a couple of pictures of it as proof. He claimed that the temple was one of the most atmospheric ones he has ever been to! The rats were apparently very comfortable with human presence and didn’t shy away from them nor did they seem aggressive they just went around their usual business placidly drinking from a big pot of milk and eating from a big container of ‘Prasad’ made and served exclusively from them! Eeeks! In spite of Madhu’s stories of what a wonderful experience it had been, I know that I made the right decision by staying away; no offence, Karni Mataji, I know you understand!

No visit to Bikaner is complete without sampling some of the ‘Namkeen’ (savory snack items) that made the town popular amongst all the Namkeen aficionados of India. We asked the auto guy to drop us off in the city’s station road area where numerous Namkeen stores and eateries line the streets. We sampled Bhujias, Samosas, Mathris and Kachoris. They were all absolutely fresh and yummy! Since it was late in the evening, the snacks kinda ruined my dinner appetite! But that didn’t stop me from stuffing my face with more of that lip-smacking stuff. A perfect end to our Bikaner visit!