Yesterday (click here to read) we decided to dedicate the day to India’s 2nd One-day cricket match against Sri Lanka. But since the match didn’t begin until 2pm in the afternoon, we headed out in the morning to check Bundi’s sole museum, Maharao Raja Bahadur Singh Museum – what a waste of time it was!

The entrance to the museum was across from our hotel; just a stone’s throw away. When we entered the massive gates, we were faced with a huge compound that looked nothing like one that would belong to a museum. The place was dirty and there were some cow-sheds along the walls of the compound. Just by the entrance gate, to the left, was the ticket counter where we purchased tickets for us and a permit for the camera. 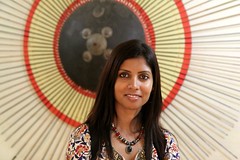 On the farthest wall of the compound was a small doorway that led to an inner courtyard. Here there were grassy lawns and here the place looked quite well-maintained. On either side of the lawns were structures housing the museum contents. We entered the one on the right first.

This part of the museum building is very well-kept and looked relatively new. It is where the Maharaja’s hunting skills are on display. There were rows upon rows of stuffed tiger skins that were killed by the Maharaja and his foreign friends. It was the most heart-breaking sight ever! They were all such magnificent animals that it was hard to see pictures of the Maharaja posing proudly by their carcasses. The worst was the exhibit of a slain tigress along with her two slain cubs – I nearly cried at the sight of them. 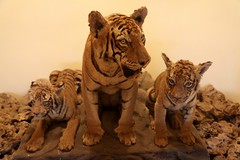 Apparently, one of the Maharaja’s foreign visitors had killed all 3 of them in one hunting session – such a fool! There were a few other stuffed animal heads as well, such as an elephant, antelopes and even a bear. We quickly exited this building and moved on to the other.

Here the building looked older and not as well preserved. It housed pictures of the last Maharaja of Bundi (mainly with Hollywood stars of the time) and some armory – none of it was special. The museum is privately owned and managed by the royal family. It’s definitely not worth a visit!

We spent the rest of the afternoon watching the wonderful cricket match, which we unfortunately lost – but it was a good game! In between, we snuck out for meals and also did a little bit of shopping at the local antique market. It was a fun and relaxing day.

At the place where we dropped off our laundry for the day, we met with an autorickshaw guy who offered to take us around Bundi’s other sights (not within walking distance of the old city) for Rs.250. We agreed to meet him the following day at 9am for the tour. He seemed like a nice guy and we knew it would be hard to see all the sights on our own. So today morning Rakesh Sharma took us in his old, rickety autorickshaw to see Raniji-ki-Baori, an 84-pillared Cenotaph, Sukh Mahal, Sar Bagh and Shikaar Burj. It was a wonderful ride with a very friendly and efficient driver.

Raniji-ki-Baori (Raniji’s stepwell) was our first stop. It’s just outside the old city walls and within walking distance of our hotel. At 9:30am in the morning the main 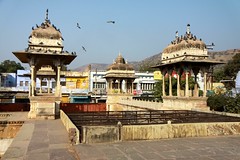 entrance to the stepwell was open but a huge mesh gate that blocked the descent into the stepwell was still locked – it would open only after 10am. We walked around the periphery and peeked in. The stepwell was beautiful with lovely carvings. But it didn’t really compare to the fabulous stepwells we had seen in Ahmedabad and Patan. Moreover, the place was not clean and didn’t look well-maintained. So we left without waiting. Rakesh then took us to a 84-pillared cenotaph, which was further out in the suburbs of the town. This is a beautiful 2-storied, limestone, structure right off the main road. 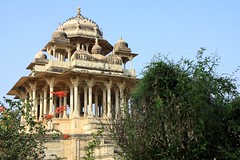 The lower level is raised on a massive plinth and has majority of the pillars. It also has a lovely Shiva Lingam in the center where locals come often to pray and light incense sticks. We climbed up to the 2nd level and were appalled to see the place completely covered in pigeon poop – there wasn’t enough clean space to put a foot down. We asked Rakesh about this and he said that the govt has hired 2 chowkidars to guard and clean the place round the clock but they don’t bother doing anything. It was so disappointing! Rakesh acknowledged that by not keeping Bundi’s monuments well-maintained they were not helping Bundi’s tourism in any way. But with the govt not showing any keen interest in these things, the locals are helpless too. It’s a sad situation.

From here, we were to head to Sukh Mahal, which is at the northeast end of town. But Rakesh asked us if we would like to have samosas for breakfast and we couldn’t refuse. He stopped near some roadside stalls, told us to stay seated and ran out to get us samosas. He came back with a couple of piping hot samosas placed on some paper with red (sweet) and green (spicy) chutney poured over them. And OMG, they were the best samosas ever! We knew he was treating us with his money and ideally we should have stopped at just one samosa each, but we couldn’t say no when he asked us if we wanted second helpings.

Sukh Mahal is located at the edge of the lovely Jait Sagar Lake and is most popular for being the place where Rudyard Kipling stayed and wrote part of ‘Kim’. 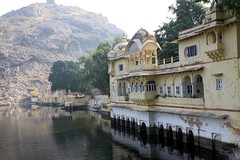 Later the movie based on this novel was also shot at the same location. Sukh Mahal is quite a small, two-storied mahal without any particular architectural interest. There is a living area and a dining hall on the lower level and two bedrooms on the upper one. From here views out to the lake are gorgeous and it must have been very peaceful to write a book here. We walked back along the edge of the lake while Rakesh ran to a stall to get us tea. So we sat by the lakeside and sipped hot, yummy chai and stared out into the lake. Unfortunately, the lake is ridden with filth and lotus fronds??, which are taking over the water. Nevertheless, it was a beautiful setting!

The 4th stop was Sar Bagh, which is an enclosed compound containing cenotaphs commemorating the royal family members. 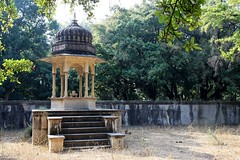 An old man, dressed traditionally manned the gated entrance to the compound. It took him forever to get up from his spot near the entrance, walk to the gate, unlock it and let us in. Rakesh asked us to give him Rs.20 for his efforts. Inside we were amazed by the wonderful marble cenotaphs that stood amidst overgrown grass. It had a sad, deserted look with monkeys freely roaming around dirtying the place. We immediately felt sorry for those that had built these lovely monuments in memory of their family and ancestors. Why doesn’t the last surviving member of the royal family do something about this!? He could give it up to the govt or Archaeological Society of India or some private firm. Somebody can surely clean the place up and restore it to it’s original glory! The marble cenotaphs are exquisitely and lovingly carved. They deserve to be better maintained and cared for! Madhu and I left the place feeling extremely sad and frustrated at the state of things.

Our final stop was Shikaar Burj (Hunting Lodge), which was a former royal hunting lodge. Right now it is completely in ruins and infested 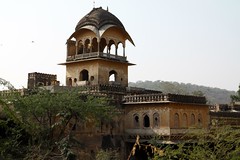 with hundreds of monkeys. Rakesh instructed us not to look at any monkey in the eye and not to go too close. They are known to attack at the slightest annoyance. We circled around the lodge, which had a beautiful chhatri at the top, to avoid the monkeys and walked to the back. Here a mound of mud separated the lodge from mustard fields. We climbed to the top of the mound and were rewarded with fabulous views of the mustard fields on one side and the deserted hunting lodge on the other. While we stood there we saw a car pull up to the back of the lodge and all the monkeys rushed towards it. 3 men got out of the car and started feeding peanuts to the monkeys. They dropped the nuts on the ground for the monkeys to feed on, but some of them snatched the nuts from the men’s hands as well. Rakesh informed us that these people come everyday to feed the monkeys and therefore the monkeys recognize them and the car instantly. It was fascinating to watch.

Rakesh dropped us back to our hotel sometime around noon. It had been a lovely tour of Bundi with him. Many of the places like Sar Bagh and Shikaar Burj cannot be visited without a reliable guide. We were very happy with Rakesh’s enterprising and earnest services, and tipped him generously. Later in the afternoon he also helped us buy bus tickets to Jaipur for the next day and promised to be at the hotel on time to take us to the bus stand. We hope he continues to do well in his business!

We spent the rest of the afternoon at a cyber cafe catching up on our blogs. In the evening we took some great shots of the palace, which was lit up beautifully. I also ended up buying some jewelry from Saima Handicrafts, which is located within the palace gates.

This stay in Bundi has been fantastic! At first we weren’t sure if we would like its rural setting but it definitely grew on us. The place has a distinct feel, which is sure to get lost over time as it gets more and more popular on the tourist circuit. Many more hotels are already under construction and am sure will crowd the quaint streets over time.

The only negative about Bundi is that, as a woman, it didn’t always feel safe. Men here seem a little aggressive and tend to stare or give too much attention, which is a little unnerving at times. I don’t think I would feel safe walking on the streets alone. However, this could be because Bundi is still new to having tourists around. I have hope that over time as the crowd gets more used to seeing women from outside visiting them, they will learn to shield their curiosity better.

One Response to Exploring Bundi