You know that Bundi is a relatively new tourist destination when you don’t find any ‘recommended restaurants’ listed in LP. When we got there, we found that most of the hotels, which are not many, offer rooftop dining. That immediately sounded tiring ‘coz we had had enough of rooftop restaurants during our 6-day stay at Udaipur. And then we found that food at our hotel, Haveli Braj Bhushanjee, was frightfully expensive and seemed to cater to the foreign visitors. So we ended up eating all our meals outside. And even then, we ate almost all our meals at one place that offered homestyle food and was reasonably priced.

However, the best food experience in Bundi was the fantastic Sathi Lassi.

Growing up in Bombay, I’ve had a lot of sweet lassis from various place 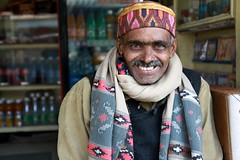 s in and around town. But nothing compares to Mr. Sathi’s fantastic, creamy concoction! He blends yogurt (prepared from fat-full buffalo milk), pistachios, saffron, honey, cardomom and much more to make this heavenly lassi. It tastes like a liquid version of Shrikhand.

We spoke to him about his piece of art and he confided that the recipe (or the beginnings of it) belongs to his mother who would make it regularly in summers during his childhood. His family has lived in Bundi for generations. His grandfather opened a medical store on the same street, across from the lassi store, years ago and it is still run today by his father.

Mr. Sathi makes about 80 glasses of lassi every morning, packs them into 80 plastic glass containers, seals them with aluminium foil and stores them in a refrigerator at the store. He claims that by evening, he always runs out of them, especially during the tourist season. He has gained a lot of fame over the years and has a visitor book, which is filled with lovely comments from fans of the lassi. Later we found tons of references to Sathi Lassi on the web as well.

For me, Sathi Lassi is as much an attraction of Bundi as the town’s City Palace.

After checking into our hotel in Bundi, we headed out to find a place for evening tea and snacks. We walked along Bundi’s main street within the old city and ended up at its western end (from where we had entered the town) at a small cafe, which was part of a hotel, Laxmi Nivas Guesthouse. It could hardly be called a cafe, though; there was just one long table – a six-seater – placed in one corner of the room that we walked into. Near the entrance was a counter where the hotel staff – members of the family that owned and operated the guesthouse – sat and waited for customers. Since this place is not situated along the main drag of Bundi, they hardly get any traffic. In the 4 days in Bundi, we did not encounter any other customers except for a couple of backpackers who checked in on the last day.

It turned out that Cafe Laxmi Nivas’ cook, Shankar, was the same guy who managed the kitchen at Haveli Braj Bhushanjee. Since the haveli offers very limited food services, Shankar had plenty of time to do additional work. So today he manages the guesthouse as well as the cafe on his own. However, since he’s not around all the time, especially in the mornings, the guys at the counter manage the kitchen in his absence – and they do a decent job as well.

Cafe Laxmi Vilas’ menu is limited but the food is excellent. After eating at very commercial restaurants in Udaipur, the homestyle food here immediately appealed to us. For breakfast we tried omelets and sandwiches along with tea. For other meals, we tried their thalis – a simple meal of 1 sabzi and 1 dal with rotis and rice. These were really, really good – they tasted fresh and well-made. On our last night there, we tried ‘Nuddles’ (noodles in Bundi English), which was basically Maggi Noodles with some additional masala and vegetables thrown in – this, too, was excellent!

The only thing with Cafe Laxmi Nivas is that they start preparing food only after you place the order. This ensures that the food is truly freshly prepared. But this also ensures that there is a definite wait time for the food to arrive on the table. The first night we had dinner there, we ended up waiting for nearly an hour. So we took Shankar’s number and the next time onwards,  we called in our order an hour in advance. This worked out beautifully!

The family that owns Cafe Rainbow has two locations of the same on Palace road. One is a smaller place close to the Bundi market area while the other is on the top floor of a guesthouse, which is also run by the same owners. We visited both locations – the market one for snacks and the other one for lunch. Both served us good food. However, the market one is a little filthy with some flies annoying us. Moreover, it doesn’t have an ambiance of any sort – it’s just a small place with a few mismatched furniture thrown together. The other restaurant, though, is really nice. It’s clean and well-managed. The setting is a small terrace area with just about 5 to 6 tables. The terrace is shaded with bamboo shades, which give it a great ambiance. We ate thalis and the food took a while to come out but was piping hot and really good.

One unique feature of both restaurants was that they both had a set of playing cards on each table. They are very handy as a good way to pass time while waiting for the food to arrive.