Bundi is said to be a relatively new destination in southern Rajasthan’s tourist circuit. It got added to our itinerary because it had good reviews in the guide books we used to research our trip. LP said that ‘it’s an effortlessly captivating town’ with a great atmosphere. So we were totally looking forward to it. But even as we drove in to the old city last evening, its streets didn’t live up to my expectations. They were filthy and narrow with a very rustic feel – I wasn’t sure if I would like it. But I told myself to be patient. As travelers we’ve learnt that enough time needs to be spent at any place to get a good feel and understanding of it. So I tried not to be judgmental and decided to give it a couple of days.

Today morning, after a late breakfast, we visited Bundi’s fantastic City Palace and the massive fort above it. Both of these are propped up against a hill that borders the town and look absolutely gorgeous from anywhere in town, especially when lit up in the evenings. 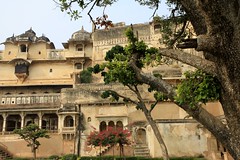 The climb up to the palace is via a steep, stone path that took our breath away. Only two portions of the massive palace are open to the public as of now. One is the main palace area with a central courtyard, hallways above and separate quarters above the hallways for the king and the queens. The second is called Chitrasala – it is to the right of the main palace area and is on a slightly higher elevation. For some reason, we headed off towards this place first, thinking that we could see the main palace next.

As we entered the Chitrasala compound, we were faced with lovely views of the surrounding area to our left and a beautifully manicured garden to our right. At the center of the garden is a small ornamental pool, which is dry now. There is seating, little stone thrones, on all 4 sides of the pool. Back in the day it must have been fantastic to sit here and be surrounded by the lovely water, garden and the views beyond! A few steps above the garden is a pillared hall, which is the reason for the name ‘Chitrasala‘ (Painted Hall). 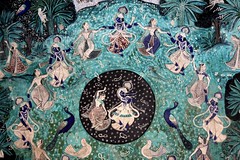 The 3 walled sides of the hall are painted with exquisite murals depicting Krishna and his deeds (teasing the Gopis, Rasleela and lifting mount Govardhan) as well as those of the maharajas and their beautiful women. We spent a lot of time here gazing at the wonderful colors, which were mainly on a palette of greens and blues.

As we exited the Chitrasala, we realized that a steep path going off to the left, leads up to the fort. So it made no sense to go back down to the main palace and then again climb the steep path back up to the fort. So we turned left and decided to explore the fort. But as we entered the first (and battered) gate, we noticed that the path beyond was very narrow and had thick overgrown bushes on both sides. It looked a little scary. We then remembered LP mentioning that this place is infested with monkeys and one must always carry a stick to fend off any attacks. At the base of the hill, a local youth had offered to guide us through the fort and also protect us from the monkeys for Rs.100 but we hadn’t paid too much attention to him then. I had seen him loitering around the Chitrasala while we were there, so we went back to it and hired him to take us to the fort.

The fort, Taragarh, built in the 14th century, is not as pretty or maintained as the ones at Kumbal or Chittor but it offers great views of Bundi. There are a couple of huge rain-water tanks here and a palace for the kings to stay in, which is completely in ruins. 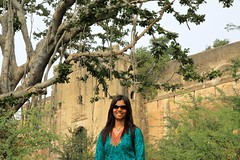 The place is infested with monkeys making it a perfect location for any scary movie. The fort is still under the royal family’s ownership and sadly, they do nothing to clean and maintain the place. We rambled through the surroundings, took some pictures and headed back down. Our guide informed us that some local idiots had misbehaved with some of the foreign female travelers so they are advised not to visit the fort alone – it’s best to go in a group or take a local guide along. Since the fort is huge and isolated, I think everybody should take a guide along to avoid any unpleasant experiences.

On our way down, we let go of our guide and turned right to enter the main entrance of Bundi Palace, which was yet to be explored. The entrance called Hathi pol is flanked by two huge elephants on each side with their trunks crossing at the top. Inside is a small courtyard with dying grass surrounded by a 2 storied pillared structure. We entered the structure through a doorway to the right and climbed up to the pillared hallway at the top, as marked by arrows. It was a beautiful, serene place but the serenity was completely destroyed by a bunch of raucous youngsters. We tried to keep as much distance from them as possible.

The hallway led out to another courtyard and this one was absolutely magnificent. The side from where we entered had a lovely pillared hall. At the top of each pillar were 4 elephants carved out of some kind of black, marble stone. They were gorgeous! Across from this hall, at the opposite end was the best part of Bundi’s Palace – the Chhatra Mahal. This wing has fantastic paintings of Krishna with red and gold (real gold!) detailing. 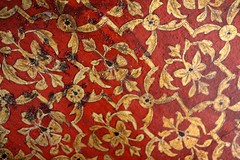 We spent a lot of time here clicking pictures and gazing at the intricacies of the paintings. Back out in the courtyard, we could get excellent views out to the town and beyond. We had seen some youngsters climb stairs in a corner to the level above but when I climbed it, I saw a few young monkeys sitting protectively at the top, staring back at me. This spooked me and climbed back down. Thankfully, a security guard offered to guide us to the top. He had a long, wooden stick for protection from the monkeys.

I’m so glad we didn’t leave without seeing the 2 Mahals upstairs. One called Phool Mahal, made for the women, had a huge mural on the ceiling depicting a royal procession. The other called Badal Mahal, which is on a higher elevation than the prior, has a ceiling divided into petals with murals of peacocks and Krishna – absolutely wonderful. Across from Badal Mahal is a huge terrace with breathtaking views of the surroundings. Here there is an ancient sun dial, which still has some markings that can be clearly seen.

The guard informed us that there’s only one living member of the royal family left and since he never married, there are no kids or relatives to hand over the royal family’s possessions. This person lives in Delhi and doesn’t visit Bundi much. The Chitrasala was handed over by him to the govt for upkeep while the Palace was leased out to some private firm. Because of this, the palace grounds are relatively clean and well-maintained. Sadly the fort has not been given to anyone, which is why it is in such a dilapidated condition.

It was nearly 3pm by the time we exited the Palace grounds and got to the base of the hill, back in town; we had spent nearly 3 and a 1/2 hours touring the palace and fort. The road coming down from the palace leads to Bundi’s main market area. We ate lunch at a small street-side restaurant and proceeded to walk thru the market. 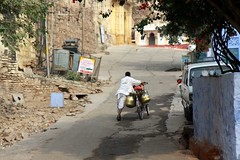 This place looks like the set of an old Hindi movie – there are kite shops, namkeen shops and sari shops just like those shown in the movies. All of them are housed in old, stone buildings with roughly hewn stone shelves and benches – it was fascinating. The market went on beyond the walls of the old city and got dirtier and more crowded with every step we took. On the way, we noticed some fabulous old havelis (with Jharokhas et al) in complete ruins – it was really sad. When we crossed the last stone gate of the old city, the landscape changed to that of any small town; only the lanes within the old city have some charm. So we turned around and went back the way we came.

Bundi has a charm completely different from that of Udaipur. Udaipur is a well-developed city, even within the old city walls, while Bundi is a true-blue Rajasthani village. Here there are no fancy restaurants or hotels (except for the heritage havelis that have been converted) and no boutique handicrafts stores. So, its not a place one would visit with kids as there’s really nothing here to keep them entertained. But, just like LP said, it is a place to see and experience what rural, Rajasthani life looks like – quite fascinating!