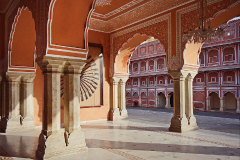 is one of the richest royal residences in India. The vast grounds include a network of open courtyards, beautifully manicured gardens and buildings which reflect a magnificent fusion of Rajasthani and Mughal architecture.

Located in the northeast part of Jaipur, the palace was constructed between 1729 and 1732 by Maharaja Sawai Jai Singh II when he was ruler of nearby Amer (home of the Amer or Amber Fort). Due to water problems and population growth, he decided to move to Jaipur. It was then that he commissioned his chief architect Vidyadhar 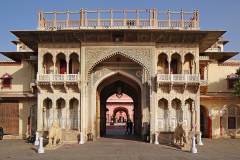 Bhattacharya to design the plans in accordance with the Vaastushastra texts.

Initially he was only responsible for building the outer walls. It wasn’t until later ruling Maharaja’s added to it so that it grew to become the sprawling complex that visitors can see today. The latest additions took place as recently as the 20th century and now the City Palace includes marble inlay, sculptured pillars and beautifully crafted artwork and inspired interior design.

While once the residence for the royal family, 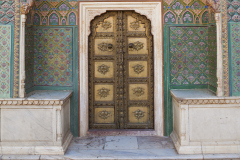 the buildings have now been turned into a tourist attraction which houses a museum, extensive art gallery and large displays of old royal clothing, uniforms, handcrafts and India weaponry.

The are many entrances to the City Palace and some of the most famous of those gates include Udai Pol, Jaleb Chowk, Tripolia Gate and Virendra Pol. Each one is delicately painted with detailed murals and many of them feature lattice windows and mirrors.

The current royal family now lives in the Moon Palace 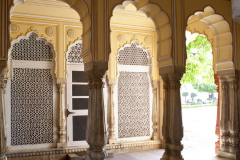 (Chandra Mahal) that lies across the main courtyard. Visitors are only given access to the ground floor of this building which houses impressive displays of textiles, manuscripts and other possessions that belonged to the royal family.

For many visitors, the Peacock Gate is stands out with its intricate and detailed workmanship that features bright peacocks that seem to come to life. It is from there that you can gaze out to mesmerizing spanning vista and see the many beautiful hues that give the Pink City its name. 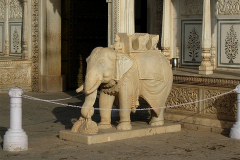 It is advised to choose the audio guide which gives you detailed descriptions ad historical accounts at various points around the grounds. A visit to the City Palace gives an interesting insight into the rich history of the days gone by.

The City Palace is located in the Old City on Chokri Shahad and is open daily from 9.30-5pm. The entry fee for foreigners is INR 150.

The City Palace is within close proximity to many other main tourist attractions including Hawa Mahal, Jal Mahal, Government Central Museum, Jantar Mantar and Vidhyadhar’s Garden. These can all be visited in one day but it is recommended to hire a car and driver for a day.