Jaisalmer Attractions outside the fort area

On our last day in town, we hired a Honda Activa 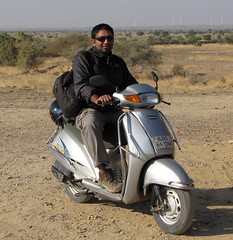 (2-wheeler) and set out to explore the Jaisalmer attractions outside the fort area. There are plenty of bike-rental shops inside and outside the fort walls. So competition is fierce and this enabled us to bargain the rates down to Rs.200 for a day rental. The store owner handed us a badly photocopied version of a crudely hand-drawn map that marked all the places worth visiting. Although it didn’t look like much, the map at least helped figure out the direction to head towards. We started the exciting day at the local petrol pump where we filled up much more than we needed to, which pretty much negated the discount we haggled for on the bike rental. Oh well!

Our first stop was at a place called ‘Bada Bagh‘, which is literally translated as ‘Big Garden’. It is a large arid piece of land with cenotaphs of Jaisalmer’s various rulers starting from Maharaja 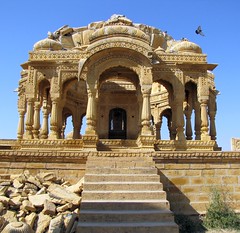 Jaitwal Singh who ruled between CE 1470 and 1506. He commissioned the building of the first cenotaph and it was later completed by his son after the former’s death. Today the cenotaphs stand isolated from the main chaos of Jaisalmer city and almost look neglected. A solitary guard at the entrance charged us a parking ticket but no entry fee. The cenotaphs have been built of locally-found yellow sandstone and look quite grand, except for the dirt and bird-poop that has accumulated on its platforms. All of them had the name and reigning years of the Maharaja engraved on a stone plaque at the center of the temple-like pavilions. Some had little, carved figurines depicting the Maharaja and his queen(s) who committed sati on the funeral pyre. It was all quite fascinating! However, if the Archaeological Survey of India dept had taken over this place, I’m sure they would have maintained and presented it better.

Our next stop, as suggested by the friendly chap 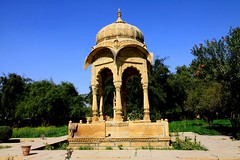 at the petrol pump, was at the Amar Sagar Lake Palace. We asked locals for direction, used the map as a reference point and finally found the entrance to the palace grounds a few kilometers past a dusty village. We were charged an entry fee of Rs.5 each and let into a garden courtyard, which must have seen much better days in the past. At its center was a lovely, arched pavilion dedicated to Maharawal Amar Singh. A long wall to its left separated it from the lake shore, which to our dismay was completely dry. The guard at the entrance informed us later that water fills up a bit during the monsoons but otherwise the lake is usually parched. However, the lovely pavilions atop the palace walls gave us fabulous views of the adjoining palace and a lovely Jain temple, which sat across the lake on the opposite shore. It was a beautiful place and we completely enjoyed lounging in the shade of the pavilions watching young boys herd some buffaloes across the lake-floor. The 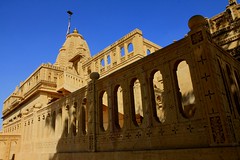 palace itself is out of bounds for visitors but the guard said that we could visit the temple by driving around the lakeshore to it. So off we went!

The Jain temple dedicated to Lord Parsavnath turned out to be exquisitely carved and absolutely gorgeous. A bored looking sentry charged us camera fees and calmly pocketed it without giving us a receipt. We were in too good a mood (carefree riding on a bike can do that to you!) to demand one or argue, so we let it pass. Inside we stepped into a stone courtyard, which had lovely water channels, albeit dry, carved into the floor. The white-marble temple stood across the courtyard and up a few stairs. Though not as big as other Jain temples we’ve seen, this one too had some of the most intricate yellow-stone carvings ever. The view from the temple to the palace across the lake was absolutely gorgeous making me certain that this location must have surely been discovered by Bollywood, especially during the late 80s when most movies were set in the region.

A few kilometers further on, just off a nicely-built state highway, 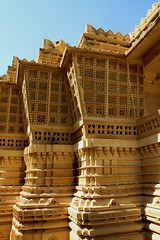 is another important Jain temple of the region: the Lodurva temple dedicated to Lord Parsavnath. A fantastically carved stone archway in the temple compound, framed the entrance to the main temple within. The slanting walls of the temple had exquisite stone lattice-work and were absolutely unique. The afternoon light filtered into the temple hall through these screens and cast some magical shadows on the floors and pillars – we were mesmerized! We had read that Lodurva is infested with peacocks and their colorful selves form a lovely contrast to the yellow sandstone of the temples. I kept my eyes peeled on the temple walls hoping to see one prancing about, but we were not that lucky.

Later we rode back to Jaisalmer past the Amar Sagar area and stopped for lunch at a restaurant within the town’s market area. The restaurant, called Kalpana, didn’t look like much and had the usual furniture and decor meant to attract foreign travelers. We were too tired (and sun-burnt!) to bother looking for a nicer place so we settled down at one of its terrace-top tables. To our surprise, their traditional Rajasthani thali turned out to be delicious. The rotis, which included one made of Bajra (Pearl Millet), were soft and utterly delicious! Gatta Masala, one of the popular Rajasthani dishes, was near-perfect, while the Ghottua laddoo for dessert was to-die for!! Overall, in spite of the shabby surroundings, it turned out to be quite a memorable meal!

In the morning we had headed Northwest from Jaisalmer, to Amar Sagar and Lodurva. Post lunch, we headed in the exact opposite direction: southeast on NH15 towards Barmer. About 17kms later, we turned right 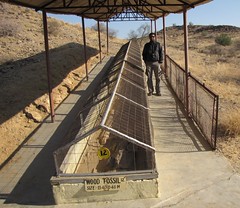 towards the gates of the Wood Fossils National Park of Akal. We were disappointed to see the gates locked but when Madhu honked the bike a few times, a uniformed security guard appeared and unlocked them for us. We were given entry tickets and asked to ride further into the park, turn right when the dirt-road forks and keep riding till we come upon a few tin-sheds with a green signboard. The guard was quite courteous and seemed especially sincere about his job when he warned us strictly not to litter the place or go off the marked trail.

The wood fossils preserved in this area are said to be about 180million years old – a figure that’s quite hard to fathom. The fossils are spread all over the park and have now been placed under wired grills and tin sheds for protection from the elements. They look like stunted trunks of trees except that on closer inspection they look drier and harder, almost like stone. It’s said that these pieces of log prove that a luxuriant forest of gigantic trees stood in this area supported by a hot and humid climate; quite mind-boggling! The dry park is not a very picturesque place to hang out, so after spending a few minutes gawking at the fossils, we sped back waving out to the friendly guard who promptly locked the gates behind us.

Although the area around Jaisalmer is not as highly advertised or marketed by the tourism dept, it should definitely be part of any visitor’s itinerary. And if one can ride a bike, there’s no better way of visiting these places. Our bike tour was fun and exciting in spite of a not-so-helpful map and because of extremely helpful locals – a fantastic way to end (sigh!) our Jaisalmer visit!

2 Responses to Around Jaisalmer