Every hotel, store and tour operator in 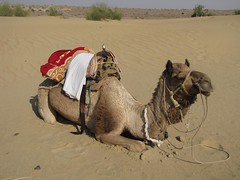 Jaisalmer can and will happily arrange a camel safari, which is a must-do activity while in the Thar Desert. We researched a bit online and eventually figured that we’d like to go on a longer safari than just a one-hour sunset ride on sandy dunes, the latter being most popular amongst visitors, who are short on time or wary of long, bumpy rides. At the other extreme, adventurous travelers go on multi-day trips, traversing from one desert town to the other on camel-back. Madhu and I didn’t want to bite off more than we could chew so we decided to do a relatively easier 2-day loop with a night of camping under the stars on a sand dune.

On the morning of January 28th, we were picked up from our hotel at 7am, driven to the fort in a jeep where we dropped off our backpacks at the Desert Boys’ Guesthouse and had tea with Anil’s brother Arvind who runs the place while the jeep was loaded with all the food that would be required for a 2-day trip into the wilderness. Then we were driven North for about an hour to the village of Barna, which lies within the boundaries of the Desert National Park. The village was nothing more than a few mud hutments built over a dry patch of land – it looked impoverished and a little sad. Here we were served breakfast of tea, fruits and toasts with butter and jam. This was also the starting point of our Jaisalmer Desert Safari so we were introduced to our three camels (one each for Madhu, me and the camel driver), their camel driver, Kaluram and his young assistant, the ever smiling Swaroop. At around 10am, we clambered atop our camels and embarked on a wonderful tour of the Thar Desert.

We had read and therefore anticipated 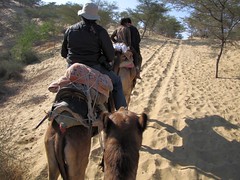 that riding a camel was not really what one would call ‘smooth sailing’. And we weren’t disappointed! The ride was bumpy and especially hard on the legs in the beginning as for some reason there were no stirrups to rest our feet on. So they dangled by the sides of the camel and gave no support whatsoever. However, thankfully, throughout the 2-day trip we never rode for more than an hour at a stretch, which was just as well ‘coz by the second day both our ‘behinds’ were absolutely sore and in no shape to endure anything longer.

The longer camel safaris, such as ours, usually include stops at villages along the way to give visitors a glimpse of life in the Thar Desert. This is especially fascinating for foreign visitors who get the chance to interact with villagers directly, enter their homes and see their life up-close. Madhu and I are not really unaware of what life is like for a typical Indian villager, so after stopping at one village and looking around a bit, we asked Kaluram to skip the other village stops and break only for meals or rest. The village kids who followed us around were super-cute and one little girl even spoke good Hindi. It was sad to see them beg for money from us, though.

Our first meal-break of the first day was at just past noon. We stopped under the shade of an Acacia tree, a few of which 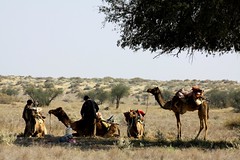 were scattered around the scrubby landscape. Kaluram and Swaroop quickly unloaded the camels, setup their cooking vessels and whipped up some strong tea and vegetable pakoras as appetizers for us. We were pleasantly surprised! After that we were served thick, soft rotis, a vegetable curry, rice and dal, all of which were quite yummy! Then they asked us to sit back and relax the afternoon away as we would head back out only by 4pm. But Madhu and I set out on foot to explore the area and found a large sandy dune to clamber atop. Even though the Thar is not a sea of sand dunes as one imagines it to be, the desert does have a few hillocks of them spread out sparsely. This was the first hillock we had encountered on the safari and it got us quite excited. Not only is the fine, golden sand a fabulous sight to behold but it’s also fun to trample on! Moreover, from atop the hillock we had lovely views of the otherwise flat desert and even spotted a couple of gorgeous peacocks strutting around peacefully. Later, while on camel-back, we spotted many deer as well. But they were too skittish and fled even before we got within photographic distance of them. Kaluram explained that in spite of govt prohibition local villagers tend to hunt these animals for food, which is why the deer seemed to be a lot more alarmed by our presence than those you see within other national parks – sad!

By the time we got back to our camp site it was 3:30pm and Kaluram and Swaroop had begun packing up and we resumed the safari at 4pm sharp. In fact, throughout that trip, Kaluram and Swaroop got things done absolutely on time and there was never any delay. My punctuality obsessed mother (and to a lesser extent, me) would have been impressed!

That night we camped on an unbelievably 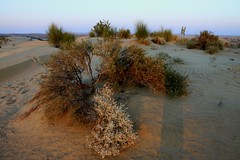 gorgeous stretch of sand dunes that were just like what we’d seen in movies and pictures. We saw large eagle-like birds that flew low over our heads and even sat majestically on the dunes, giving us the perfect photo opportunity! While Kaluram and Swaroop went about setting up camp, Madhu and I walked the entire length of the sand dunes and then found a pretty spot to sit and watch the sun set over the distant scrubland – it was magical! However, right after sunset we hurried back to our campsite before it got too dark for comfort. It would be easy to lose one’s sense of direction in that landscape.

That night, Kaluram and Swaroop whipped up an amazing 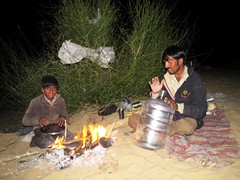 dinner under the stars around a lovely campfire while we sat on Khatias (rope-weaved cots) and chatted with them about life in the desert. We learnt that Kaluram earns abouts Rs.2,500 per month as a camel driver while Swaroop earns a little less as the assistant. They take up as many gigs as possible during the travel season as it’s the only time of the year when they can earn a decent amount. During the off-season Kaluram works as a laborer in the stone quarries close to his village. He is in the process of saving money to buy a camel of his own. It would cost him about Rs.25,000 for an adult camel that can be trained and taken on safaris. But he wasn’t anywhere close to saving the required amount and sounded a little sad when he spoke about impending expenses that will eat into the little that he has. Swaroop’s story was equally sad! However, in spite of their adverse life conditions and stories, there was never any dearth of smiles on either of their faces – amazing! After dinner the duo regaled us with folk songs using empty vessels and water cans as instruments; it was absolutely entertaining!

We considered sleeping under the

stars but it was just too cold. So Kaluram set up our cots inside a large tent, laid it with a thick mattress and then gave us about 4 layers of comforters and quilts to keep us warm – it was perfect! The night sky was gorgeous, though, with the moonlight reflecting off the sand beautifully! If one can bear the day heat, summer night camping under the stars must be magical! The following morning we woke up early and climbed to the highest point of the sand dunes to catch the sunrise. It wasn’t a spectacular one but just being out there at that time of the morning was so darn calming and beautiful!

After breakfast of fruits, jam-toasts and 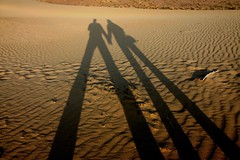 tea, we trotted on for about an hour and stopped at another magnificent stretch of sand dunes. This stretch was much larger than the one we had camped on and therefore, prettier. Kaluram and Swaroop let us hang out there for almost an hour while we walked around, took pictures and then sat gazing at the unbelievably gorgeous landscape! That place was the most picturesque part of our safari and it almost made us wish that we had camped there the previous night.

That morning grey clouds swam in the sky and cooled the temperature considerably. It was especially nice when we stopped for lunch and laid down on a mattress for a short nap. It even drizzled for a bit which felt wonderful but also made us pack up quickly to resume our return journey. The rest of our 2hr trot back to Kumherkota village from where a jeep was to pick us up was uneventful. Once we got there, the village children followed us around practicing their Hindi and English skills by throwing random questions our way – it was quite amusing! The jeep arrived a few minutes later and whisked us away, bringing us back to Jaisalmer by 6pm just as promised!

Looking back, I think we enjoyed this safari so much because it was very nicely arranged: the camel drivers were super-nice and courteous, food was aplenty, bedding and comforters provided for overnight camping were great, jeep pickup and drop-offs were on-time and the route we were taken on ensured us a glimpse of the Desert National Park as well as a lovely experience of the beautiful sand dune stretches! Moreover, the safari length was perfect too – anything longer would have been both boring and not to mention extremely tiring! Overall, a fabulous experience and a highly recommended one of our low cost holidays!