They say the true essence of Rajasthan lies in the desert town of Jaisalmer making it one of the most popular destinations in the state. Madhu and I have always been a little skeptical about such 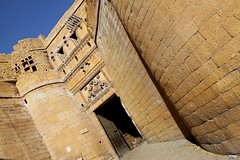 hyped places especially because they tend to get too crowded and lose their charm with tourist-focused commercialization. So we weren’t expecting much as we rattled along on a crazily-driven private bus from Jodhpur warily watching the landscape get steadily drier with sparse vegetation and even sparser population. Little did we anticipate the experience lying ahead¦

Lying at the heart of Thar Desert and named after its founder, the Rajput king, Maharaja Rao Jaisal, Jaisalmer is also known as the ‘Golden City’ because of the golden-yellow sandstone found 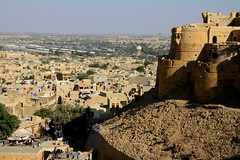 in the region. Its main attraction is no doubt the gorgeous hill-fort, which was originally built in the 12th century by

Rao Jaisal. The fort encompasses a fabulous palace, beautiful Jain temples and stone bastions from where views out to Jaisalmer town are to-die for! However, the fort’s most unique aspect is the fact that even today, after nearly 900years, Jaisalmeris still live inside its walls in traditional Rajasthani havelis built like row houses along narrow, stone-paved alleyways – absolutely mesmerizing!

As our bus entered Jaisalmer city and dropped the first few passengers off, some local youngsters jumped into the bus and started badgering the foreign travelers about hotel bookings. We were appalled at their behavior especially because they didn’t give up even when told that hotel bookings have already been done! When we alighted at the bus stand we were immediately surrounded by auto drivers fighting to get our attention – it was completely chaotic. I had read about Jaisalmer‘s over-the-top, aggressive harassment of tourists but seeing it in person was something else. We were completely put off by it and wondered if Jaisalmer was going to be hard to handle. However, once we had checked in and stepped foot in the fort-town, things changed magically. Friendly locals welcomed us warmly and even when trying to sell us handicrafts or camel safaris, were never aggressive or pushy.

We spent our first afternoon and evening 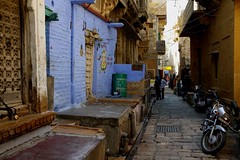 walking through the fort and marveling at life within its walls. Every lane was colorfully alive with every second door front selling everything from traditionally-styled cushion covers to jewelry and (dubious) antiques. For people like Madhu and I who absolutely LOVE browsing through such stuff looking for unique things that we could fill our future home with, it was paradise! That first evening itself we ended up buying quite a few things and mentally noting those that we would like to buy before leaving. Not surprisingly on our last day in Jaisalmer we rounded up our purchases by buying a large tote-bag to carry back all the things we had bought . 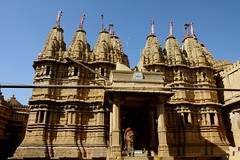 some magnificent Jain temples, which have intricate marble carvings similar (but not of the same quality of course) as those seen inside the famed Dilwara temples of Mount Abu. The best carvings are within the Lord Shantinath and Lord Parsavnath temples. Both of them are 2-storied with sandstone exteriors, carved pillars, brackets and Torans in marble and are wonderfully atmospheric. Indians are charged a camera fee while foreigners are charged an entry fee as well, which go towards the temples’ upkeep and maintenance.

The other attraction is the 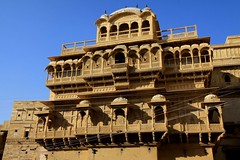 Royal Palace or ‘Raj Mahal’ of Rao Jaisal and his descendants. This has now been converted into a museum and visitors can tour the premises for a nominal entry and camera fee. Locals and guidebooks convinced us that the interiors of the palace are in a dilapidated condition and are not worth spending too much time in, so we refused the services of a guide or an audio guide thinking that it would be a waste of time. However, the palace, though not in the best of conditions, is totally worth a ramble and a guided tour would have been nice. We loved the views out from the top-most windows of the palace and a collection of baby cribs that were adorned with semi-precious jewels and hand-painted murals – very interesting!

Having been on the original Silk Route, many wealthy tradesmen and merchants lived in Jaisalmer and built some exquisite Havelis as residences to show off their wealth and prosperity. Today these Havelis have become a major tourist attraction and no visitor leaves town without paying them a visit. Located within the crowded by-lanes of the market outside the fort walls, the most famous Havelis are the Patwon-ki-Haveli, Nathmalji-ki-Haveli and Salam-Singh-ki-Haveli. 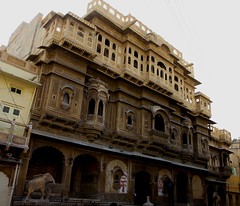 we walked through the village market and visited all three Havelis. Friendly locals pointed us in the right direction and we started our tour with a disappointing visit to Nathmalji-ki-Haveli, which is a 19th century residence built by the region’s then Prime Minister. Disappointing not in terms of architecture! On the contrary, the exterior facade of the haveli with its intricate lattice-work and Jharokhas guarded by two beautiful sandstone elephants near the entrance was absolutely gorgeous! However, inside at the entrance foyer, a very grumpy looking woman sullenly told us that visitors are not allowed any further. This would have been understandable if a group of foreigners led by a local guide hadn’t happily ventured into the Haveli’s innards just before us. A little miffed at this discrimination, we offered to pay an entrance fee to be let in, but Mrs.Grumpy was least interested and wouldn’t even look at us. Oh well!

Our next stop was at the gorgeous set of 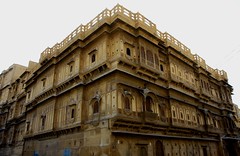 Havelis built by 5 Jain brothers in the 19th century. This is the Patwon-ki-Haveli complex. The residences are built on either side of a narrow lane and have the most exquisite exterior facade ever! The first residence near the entrance to the lane was sold and this has now been converted into what is called Kothari’s Patwa Haveli Museum. An entrance and camera fee is charged here, which at first felt exploitative, but later proved worth it, as the Haveli has been beautifully maintained. Each room within it has been set up with lovely furniture and decor to give us a glimpse of what life in the 19th century must have been for the Patwas. The ground floor of the Haveli has some handicraft stores where (we had been fore-warned!) the prices are not meant for the backpacking crowd. The other Patwa Havelis are under government maintenance. Sadly their interiors are pretty much in ruins and infested with pigeons. 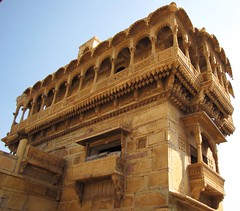 Singh-ki-Haveli, built in the 18th century, was the oldest one we visited that day. Unfortunately, it was also the least impressive. We were charged an entry and camera fee but there was no sign of this money being used towards the restoration or upkeep of the Haveli. Its exterior doesn’t have the same intricate lattice-work as the other Havelis but a tall tower with lovely arches and balconies at the top gives it a unique look. It’s best to view this from the outside rather than pay to go in – there was nothing of interest within.

However, before heading back to wandering the fort lanes (our favorite pastime in Jaisalmer), we stopped at Dhanraj Bhatia’s sweet shop and bought a piece each of the famed Ghottua and Panchadhari Laddoos. They were just too good and an absolute must-have in Jaisalmer!

The town also has an artificial lake called Gadisar or Gadi Sagar, which is quite popular among tourists. Built by 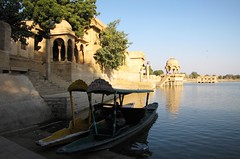 Maharaja Gadsi Singh as a water supply tank for the area, the lake’s importance is marked by the numerous small temples and pavilions built along its shores. A large, arched stone gateway with a temple dedicated to Lord Krishna on the top marks its entrance. These look absolutely gorgeous especially in the photographs. However, up-close the lake shores are quite filthy and not a pretty sight. Visitors can buy packets of bread to feed the fish in the water, which is nice, but the leftover plastic packets float all over the place and are a definite environmental disaster – it’s super sad! There is a small cafe along the shore as well but the filth killed our appetite. For similar reasons we didn’t bother going boating in the lake, either.

Back in 2009, when we stopped by Udaipur for a 2-day visit, the city enamored us so much that we stayed for 6 nights and all we did was wander its streets, shop, eat, chat with friendly locals and laze. And that’s exactly what we ended up doing in Jaisalmer as well! In fact, after traveling for almost 15 months, prior to Rajasthan, we had started to tire a little and had begun talking more and more about winding up our travels and settling back down to a routine life. But the day we stepped foot in this state, our enthusiasm for travel suddenly received a fresh boost of energy and we now can’t seem to have enough of it. Loving it!