Back in Dec 2009 (gosh, where did the days go?!) we entered Rajasthan on our way out of Gujarat and toured the state’s southern towns before heading home for the holidays. Since then we haven’t had a chance to come back and visit the other cities even though they were always on the top of our must-visit list. As 2010 went by and we saw other parts of India we slowly forgot about Rajasthan and its magic. But the minute we stepped foot in Jodhpur on the cold morning of January 24 2011 (a full year later!) we were left wondering why we hadn’t returned sooner!

Jodhpur is a small city that looks almost like 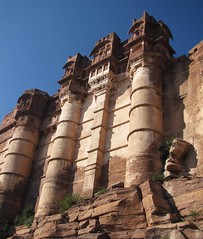 any other Indian small town until you wander its old city’s markets or pay a visit to the gorgeous fort that looms above. The fort, built by the city’s founder Rao Jodha in 1459, turned out to be the most well-maintained and well-presented Indian monument we’ve ever visited! On the morning of our arrival at Jodhpur, we checked into a hotel, showered and breakfasted before setting off to see it. An auto dropped us off at its base from where the fort’s beautiful Jharokhas (latticed, outward projecting balconies) looked absolutely gorgeous. We wandered past its main gates at around 10am; little did we know that it would be well past 2pm when we would return through there!

The Mehrangarh Fort is being managed by a trust set up to care for the Jodhpur clan’s estates. When we walked up to its entrance gate, we immediately noticed how spotlessly clean the place looked. Everything within the fort looked well-organized and perfect, just like we had always wished Indian monuments to be. Even the security guards were well-dressed with long, military-style overcoats, smart hats and proud moustaches. However we soon learnt that such perfectness comes with a price: Entry ticket – Rs.30 each, Camera Permit – Rs.75 each, Audio Guide – Rs.150 each! But in the end it was all worth it; we enjoyed the fort visit tremendously! 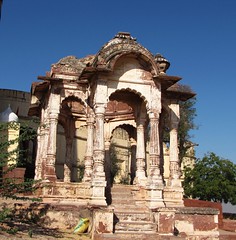 and Darbar halls are all fabulous and gave us some really nice photo ops. We also enjoyed the well-presented museum that housed a collection of Howdahs and palanquins – they were simply gorgeous especially the ones in intricately patterned silver! I also loved the views out to Jodhpur, which showed off the blue walls of the Brahmin homes that give it its ‘Blue City’ tag. But the highlights were definitely the fabulous living quarters of the various rulers of Jodhpur, the best of which was the Sheesh Mahal, which had some exquisite mirror-work!

At the end of the tour, we handed over our audio-guides and then browsed the museum-store where everything – paintings, t-shirts, jewelry, handbags, other souvenirs – was of exquisite quality but a little too expensive for me. Right outside the store is a little bazaar of sorts where locals sell colorful, well-made versions of the famed Jodhpuri Joothis (footwear) at reasonable prices. Later we had lunch at Cafe Mehran within the fort where the staff was dressed in traditional garb topped with turbans. The food was, expectedly, just as everything else at the fort, of good quality and well presented. Replenished and completely satiated from our fort visit, we stepped out of its main entrance at around 2:30pm and headed on foot to Jodhpur’s next attraction!

Less than half a kilometer from the fort is the gorgeous Jaswant Thada. It is a 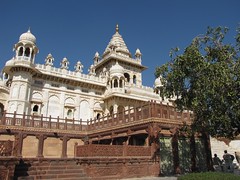 19th century cenotaph built in memory of the 33rd ruler of Jodhpur, Maharaja Jaswant Singh. It was built by his son, Maharaja Sardar Singh, who ensured that this white-marble brilliance is made with the utmost attention to detail and is of the highest quality possible. We were completely overawed by the vision of this grand memorial from the terraces of the fort. But even up-close it was equally beautiful and all the more awe-inspiring. In fact, standing at its base, it looked more like an opulent palace than just a memorial! The complex today holds cenotaphs of other members of the royal family as well in an enclosed courtyard. Despite the exterior opulence, the interior of Jaswant Singh’s memorial is quite austere and unadorned. Its thin marble walls looked lustrously lit under the sharp afternoon sun – it was beautiful!

The colorful markets of Jodhpur’s old city lie at the foothills of the fort and are even visible from there; it would have made sense to head there after visiting Jaswant Thada. But the Umaid Bhavan palace was also on our must-visit list and its museum would close for the day by 5pm. So we took an auto across town to its southeastern edge where we were driven through a couple of massive stone gates, up a small hillock and past an under-construction housing colony of pink sandstone to the gates of the palace.

Built in 1943 by Maharaja Umaid Singh, the grand Umaid Bhavan palace is said to have taken all of fifteen years to complete and we could see right away why: the place is HUMUNGOUS!!! In fact, we later learnt that this grand edifice is considered to be one of the world’s largest residences! A part of the palace has been

leased by the Taj Group and converted into an ultra-luxury hotel. Another tiny portion of it has been converted into a museum so that aam-junta like us can take a peek inside this massive complex. The museum wasn’t very interesting, though; it was small and a little uninspiring. And it occupies such a small part of the palace that it hardly felt like we saw enough of it. However, we found some gorgeous coasters with Rajasthani miniature paintings on them at the museum store and that made our visit (or at least mine) worthwhile. An array of shining vintage cars showcased across the palace grounds made it an interesting stop on our way out.

The auto guy who had dropped us off at the palace 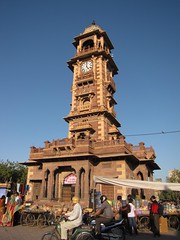 had hung around enterprisingly waiting for us and happily brought us back to Jodhpur’s old city market called the Sadar Bazaar. It is enclosed within the Meherangarh fort’s outer boundary walls and is therefore accessed via arched stone gateways. Here we were pleasantly surprised to find ancient stalls selling spices, vegetables, garments, handicrafts and of course, Jodhpuri Joothis. They surround a pretty, sandstone clock tower that looked well-preserved for its age. We wandered through the bazaar, bought some joothis and marveled at how life here in old Jodhpur seemed to have held on to its ancient ways – it was magical!

Jodhpur, just like many other Rajasthani towns, is famous for its traditionally prepared sweets, especially Lassi and Malpua. A recommended place to try these is Shri Mishrilal’s Hotel. We found it tucked under one of the market’s stone gates with friendly staff who ushered us into a clean space packed with long tables and benches for seating. We ordered one Lassi and one Malpua. Both were absolutely yummy but too much to finish completely.

Just outside the market’s gates is a tiny stall, 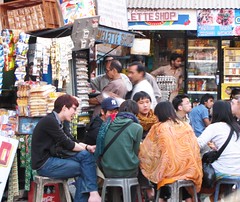 simply called the Omelet Shop. Ever since its name appeared in a popular guidebook it has done amazing business especially during the tourist season when travelers from around the world flock there for a quick bite. We sampled their Cheese Omelet, which for just Rs.45, was made of two eggs and accompanied by 4 slices of toast; yummy and cheap! All patrons are seated in a semi-circle around the stall, on small, plastic stools with wooden crates as tables. Even though they don’t make tea, when we requested some, it was promptly ordered from a neighboring stall and served as soon as possible. The father and son who run the place are friendly and enterprising, calling out to passersby cheerfully to stop and sample their fare; no wonder they do such great business!

Later we browsed the handicrafts stores just outside the market’s gates, cheerfully bargained with friendly store owners and bought a couple of irresistible wooden photo frames with an antique finish, took an auto to station road to buy more joothis from the popular Joothi Corner and then, exhausted, finally called it a day!

Our first day back in Rajasthan made us realize why the state is so popular amongst both domestic and international travelers. Each city has so much to offer in terms of architecture, history and culture. Although the state government hasn’t done much to promote all this, the enterprising Rajasthanis have done much to welcome travelers and give them as much of a fantastic experience as possible. We knew we were in for a fabulous tour over the next few days…