In a country where agriculture has been the largest economic sector for thousands of years, cattle fairs have also, obviously, been a long-standing tradition. The Pushkar Camel and Livestock fair is one of the largest in the world and is today a much sought-after travel experience by most India travelers. We couldn’t fit the 2010 fair into our schedule and had felt quite dejected about it. So when our Jaisalmer friend, Pradeep, called us while we were lazing at Mahansar Fort, Shekhawati and informed us of the upcoming Nagaur cattle fair, we dropped all other plans and headed straight for it.

Located at the heart of Rajasthan, Nagaur is a dusty town, quite like any other in India. When we got there late in the afternoon (after a wonderful visit to the Tal Chappar Wildlife Sanctuary), finding a nice hotel to park ourselves at became a challenge. Because of the fair, most hotels had been pre-booked and we were left scrounging. After much running around, we finally found a neat room in a modest hotel, which was just about a couple of kilometers from the fair grounds. After a night’s rest, we left for the fair at around 6am the following morning. And what a day it turned out to be!

Also known as the Jodhpur Nagaur Fair, this cattle fair is the second largest one held in India, after 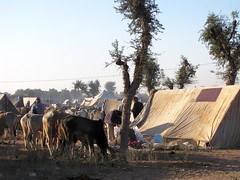 Pushkar, of course. It goes on for about a week and is mainly about trading cattle. It doesn’t have the tourist trappings of Pushkar’s mela and therefore feels a lot more authentic. But this also means that it’s not all that fun for the casual traveler. Of course, there are the usual tug-of-wars and bullock races, but they are not as tourist-focused as Pushkar. It’s said that about 70,000 bullocks, camels and horses are traded here every year and this is the fair’s biggest attraction. Just to see the sheer number of cattle assembled in one place is a mind-boggling experience!

Pradeep met us for breakfast at a road-side dhaba and then carted us to the fair in his jeep. As we gazed out, the morning haze cast a dull light across the fairgrounds and 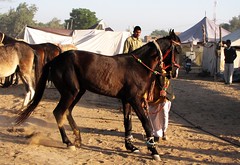 all I could see was a sea of animals on either side of the road it was the most thrilling and unique sight ever! As soon as we alighted, our friend went off in search of the perfect male horse to add to his stables, while Madhu and I whipped out our cameras and plunged into the crowds. Since trading hadn’t really begun for the day, we caught the animals and their owners in a quiet mood, slowly going about their morning chores and preparing, or rather decorating, their cattle for display. We started with the stables where there were some exquisite Marwari horses. We watched Pradeep as he checked some of the horses and casually talked to the owners regarding the horses’ lineage and purchase price. Although, we were quite fascinated by the buying process, we didn’t hang around him for long, lest it affect his bargaining chances.

Beyond the horse stables were rows upon rows of camels. Unlike the wary-eyed horses, these animals looked least interested in their surroundings and seemed content

chomping on their breakfast. But the bullocks completely outnumbered all the others. We had a great time photographing these tall, majectic beasts who were the most decorated of all the animals. Some were as tall as 6ft with horns soaring even higher and a strong, muscular body. They looked too dangerous to get close but seeing Madhu’s camera all the cattle-owners assumed that we were from the media and therefore were more than happy to proudly strut their stock before us. It was both amusing and a lot of fun!

Rural India has the friendliest people and that was proven true as we walked amongst them and their animals. 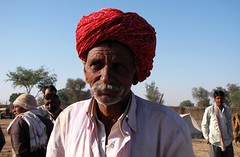 They smiled at us cheerfully and often called out to us to share a cup of tea with them. The most gregarious of them were a bunch of Sikh farmers who physically dragged us, albeit warmly, to their little make-shift tents and handed us tall glasses of piping hot, milky, sweet tea. They chatted with us amicably and were more than happy to pose for Madhu. What they loved most was being able to view their pictures on the camera’s display.

As the sun rode up into the sky, activity buzzed around the fair but it got increasingly warm and by 11am 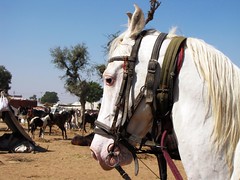 we were ready to leave. By then Pradeep had also managed to strike a deal for a horse at Rs.2lakhs! We were astonished by the price but then, of course, we have no clue how much a horse of a good breed must cost. We were taken to see the purchase and I fell in love with it at first glance. It was a gorgeous white horse with a silky, silver mane and the most beautiful face ever. The sellers marched the horse around a bit to show it off to us and even we could tell that it had a wonderfully dignified disposition totally worth Rs.2 lakhs! 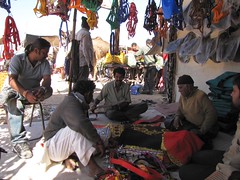 to the fair’s market where cattle accessories were being sold in a colorful mix. We watched as Pradeep bought a ton of stuff like a saddle-cover, embroidered face-mask, whip and anklets for his new horse. He explained that when he reached Jaisalmer, his family would receive the horse with a proper religious ritual and for that the horse needs to be decorated and presented beautifully. I wish we could have watched that ceremony!

By the time all the purchases were done and loaded into the jeep it was mid-afternoon and unable to bear the heat and glare any longer, we left immediately.

We had spent 4 hours at the Naguar Cattle Fair and those were probably the most unique hours of my life! To walk amongst all those animals, their proud owners and the prospective buyers and to share cups of tea with them was a fabulous experience; one of our top India experiences, for sure!

Getting There:
Air : Jodhpur is the nearest airport. It is about 138 kilometers from Nagaur.
Rail : Nagaur has its own railway station with connectivity from all major cities.
Road : Nagaur is well connected by road to all major cities of Rajasthan.