Nagaur wasn’t on our original Rajasthan itinerary but then, so far in our journey, we haven’t really followed any of our planned itineraries completely. In fact, at most times 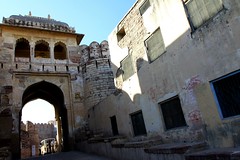 we haven’t even had an itinerary in the first place! But that’s beside the point. We were in Nagaur in February to witness the town’s annual cattle fair and we couldn’t leave there without exploring at least a wee bit of it¦

Nagaur is an ancient town, having been under the rule of conquerors from vastly different cultures. Nothing epitomizes this better than the 4th century Ahichhatragarh Fort, which was originally built by the Nagavanshi clan (hence the name that means ‘Fort of the Hooded Cobra’!) but rebuilt in the 12th century by the Ghaznis to include palaces and mosques. Over time it gained a distinct Rajput-Mughal architectural design as gardens, temples and fountains were added. Since Emperor Akbar’s rule, the Nagaur Fort complex was held by the princes of Rajasthan and even today is managed by trust funds belonging to the erstwhile royal families.

When we heard that the Nagaur Fort was being managed by the Mehrengarh Fort Trust, which manages Jodhpur’s fabulous Mehrengarh Fort, we knew we had to visit it. After all, the Jodhpur fort is one 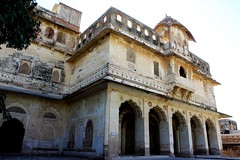 of the most well-preserved and well-presented fort that we had been to. Nagaur being a small town, getting to the fort wasn’t hard; just a Rs.40 auto-rickshaw ride away from our hotel. We got there at 4pm knowing that we had just about a couple of hours to explore the place before it closed for the evening. How we wish we had had more time¦

The outer entrance of the Nagaur Fort is smack in the middle of a crowded market area but once we stepped into the long stone alley that leads up to the inner wall with its main entrance and ticket counter, 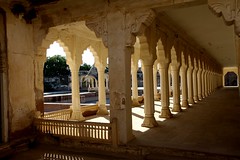 everything turned serene and under control. We could immediately see the trust funds at work – no litter, polite staff and beautifully preserved buildings. We debated whether we should ramble through the fort ourselves or avail of guide services. In most cases we prefer walking around on our own unless it’s a historically significant monument like the Agra Fort or the Red Fort; this one didn’t really fall in that category. However, since we were short on time, we decided to hire an authorized guide, of whom there seemed to be many in the complex. That was the best decision ever!

Our guide turned out to be knowledgeable and spoke really well. He ensured that we covered every aspect of the fort and made the maximum use of our short time there. And there was so much to cover! The Nagaur Fort has some unbelievably gorgeous palaces. The biggest and most popular one amongst them, the Hadi Rani Mahal, named after one of the town’s renowned queens had some exquisite murals and Jharokhas with intricate lattice-work. In fact, it is said that this palace has some of the best examples of the celebrated Nagaur style of paintings. Another palace called the Deepak Mahal had Persian-style floral designs and several niches in the inner walls to hold lamps. The Abha Mahal had the most water features in the form of channels, fountains and hamams. The Akbari Mahal was built to commemorate the recapture of Nagaur by the Mughals in the mid-16th century and it was probably the best example of Rajput-Mughal style of architecture. The guide took us to the upper floors of the palace from where we had a bird’s eye view of the entire complex and it looked gorgeous – perfect setting for a Bollywood movie!

We were mesmerized by all this but what we loved most were the central courtyards, which had fountains, gardens and pools spread all over. The guide said that such a large number of water bodies ensured that the palace grounds remained cool and fragrant even during the oppressive summers of the desert. These are, of course, dry at the present. 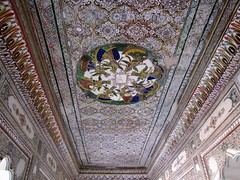 The fort complex also includes two temples dedicated to Lord Krishna and Lord Ganesha, both of which have primitive paintings and murals. A beautiful mosque built by Emperor Shah Jahan and therefore called the Shah Jahani mosque, has blue-tiled mosaic work and seemed very well-preserved. There is a Jama Masjid as well within the fort, which is even today used to offer Friday prayers.

Just like elsewhere in Rajasthan, a part of the fort complex is now a luxury hotel. I think this is a wonderful concept as it allows visitors (who can afford to do so!) stay within the fort and truly 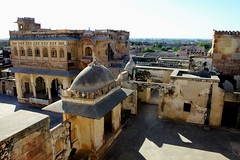 experience the magic of Rajasthan’s past royalty and heritage. Of course, all this is good only if the management ensures that they preserve the original architecture as much as possible and maintain the sanctity of the place. So far, in our travels we’ve happily found this to be the case!

After an hour and a half, when the guide brought us back to the point from where we had started the tour, we thanked our stars for not leaving town without visiting this wonderful fort and also for the invaluable guidance we were provided with.

Nagaur lies between Bikaner and Jodhpur, just about a couple of hours from either city. So it can definitely be visited as a day-trip or combined with a visit to the town’s cattle fair, just like we did. In either case, the town’s gorgeous fort complex absolutely deserves a visit and a thorough look-over!