When starting out on our tour of Rajasthan, we knew very little of the Shekhawati region except that it is 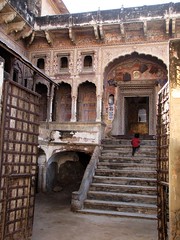 an upcoming tourist destination and is known as the country’s only ‘open air gallery’ – a tribute to the frescoed havelis found there. In fact, even when we boarded a dusty Mandawa-bound state bus from the outskirts of Bikaner, we didn’t know much and so our expectations weren’t much either. However, by the end of our visit, we fell in love with Shekhawati’s rustic charm as well as its elegantly painted walls – a unique Rajasthani experience!

Shekhawati was established by the Shekhawati Rajputs who ruled over their little kingdom right until the day of independence. The region was divided into several parts called Thikanas, each of which was ruled by a Rajput Rao. Each ruler went about setting up a fort and palaces within his kingdom, which eventually resulted in a cluster of fabulous structures concentrated in a relatively smaller part of the state. The settlement of rich merchants and traders additionally ensured the building of magnificent living quarters with richly painted interiors and exteriors in traditional Rajasthani colors and style. And today, in spite of little to no govt aid, these crumbling homes with their exquisite murals are the toast of the region and are responsible for the increasing multitude of visitors who stop by every year.

Almost every village in the region boasts of fabulously painted havelis and architecture so it becomes quite difficult for a casual traveler to pick where to go or what to see. We asked several people (a 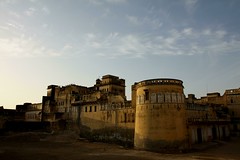 mixture of locals, hotel staff and on-line travel advisers) and got varied answers on what was ‘best’ in the area. In the end, we randomly picked a few villages for visit and left the rest for another time.

The bus from Bikaner dropped us off in the village of Mandawa where we stayed for 2 nights. It is the most tourist-friendly town of the region and has several hotels, including the gorgeous Castle Mandawa. We stayed at the more budget-friendly Heritage Mandawa, which is a restored haveli with paintings covering every inch of its interior and exterior walls. It was our first introduction to Shekhawati paintings and we loved it. So we spent the rest of the day enjoying the haveli and ventured out only the next morning in a cab rented for the day.

Our tour included stops at the towns or villages of Bissau, Mahansar, Ramgarh and Fatehpur. When we were first dropped off at Bissau, we had no clue what to expect or do. We ventured out into the village streets feeling a little awkward about staring at people’s beautiful private homes. But the fabulously painted buildings enchanted us completely and we soon lost all inhibitions and stared at them helplessly. It was sad to see that many of them were lying unoccupied and uncared for. Some were occupied and we even got invited into one of them for a closer look. The family let us into one of the bedrooms and allowed us to take pictures at will – it was a lovely opportunity to view Rajasthani life up-close in a traditional, 200yr old home. Later we visited the town’s neglected fort, which didn’t have much to offer in terms of architecture or paintings but was imposing and worth a ramble. The caretaker of the fort, who also lived on the premises with his family, ignored us at first and then later tried to sell us old glass tumblers as antiques – it was both amusing and irritating.

Mahansar turned out to be a much smaller 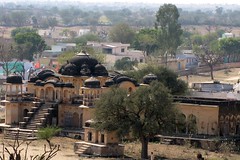 village with lovely cenotaphs, havelis and a sprawling fort, parts of which have been converted into heritage hotels by the descendants of the ruling Thakurs. We loved the fort and had a fabulous conversation with Kanwar Bhagwati Singh who lives in and manages the heritage hotel – Mahansar Fort. He let us browse through the fort-haveli and offered us some refreshing tea with snacks. We loved the place and its people so much that we wished we were staying there instead of Mandawa. 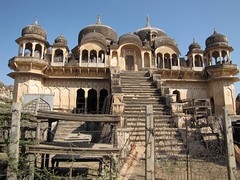 than the other villages we visited but sadly none of them were being maintained by the government. The grounds of some of the loveliest cenotaphs, though locked, were being used by the locals as dumping grounds for old, unwanted furniture and parts. Our driver managed to ask around and get the keys for one of the cenotaphs from a neighboring store owner. We were then able to climb up to its roof and sit under the fabulous Chhatris, which had lovely paintings. These were not as detailed or intricate as the ones on the walls of the havelis, but they were just as beautiful. 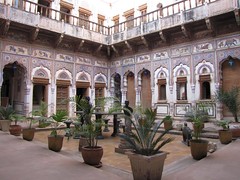 Our final stop of the day was in the town of Fatehpur, where the driver personally escorted us around. He led us straight to the town’s most famous attraction – the Deora Haveli, which had been bought and restored by a French artist, Nadine Le Prince. To say that this was the absolute highlight of our Shekhawati tour would still be an understatement! This place is unbelievably gorgeous! The French lady has painstakingly restored and renovated the haveli, blending in her own paintings to the existing ones to give the place a fabulous, cohesive look. She has added period furniture and decor to give visitors a glimpse of Shekhawati style of life. For Rs.100 per head as entry fee, a young French student gave us a detailed tour of the haveli, explaining the use of each room and its furnishings. The haveli has two inner courtyards and these were our favorite parts. She later took us to two art galleries at the back of the 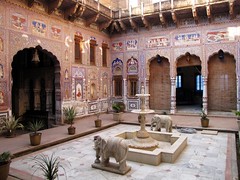 house, where horse stables once stood, and let us browse through Nadine’s collection in leisure. One of the galleries had paintings from artists around the country and most of them were up for sale. I hope Ms. Nadine someday decides to run a coffee shop within the haveli premises – it would give visitors a chance to lounge around for some more time and soak in the fabulous ambience…

As we walked around Fatehpur, we glimpsed many fabulous homes but none of them were as beautifully preserved as the one taken up by Nadine. The streets of the village, though a little filthy, had a nice rural charm, which was enhanced by the presence of beautiful peacocks who strutted around without any fear. We stumbled upon a glass-bangle maker whose stall looked wonderfully colorful. He made lovely

bangles out of molten glass right in front of our very eyes – we were thrilled! Needless to say I couldn’t walk away without buying a couple of them from him¦

By the time we returned to Mandawa that evening we were quite enamored by the region and wanted to explore more of it. We couldn’t get the Mahansar Fort-palace and its folks out of our head, so we called them and arranged a 2-night stay at their place just to experience rural Shekhawati away from Mandawa’s commercial chaos. Then the following day, we checked out of Heritage Mandawa and spent the morning walking around town, exploring its havelis and shopping a bit.

The highlight of Mandawa has got to be its fabulous fort-castle, which is now a luxurious heritage hotel called Castle Mandawa. 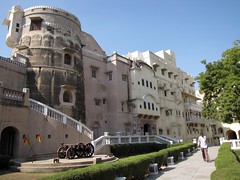 For Rs.300 per head we got to explore its grounds in leisure, which we absolutely enjoyed. The fort-palace is beautifully maintained with several inner courtyards and halls, all with miniature paintings covering every inch of the surface. We were told that a recent Hindi movie, was shot on this location and I could just imagine why! Later we devoured a lunch of sandwiches and chilled beer on the porch of their cafe and loved every minute of our time there. The Rs.600 charged as entry fee was adjusted towards the cost of our lunch, which was nice.

Later, we visited a few of Mandawa’s famous havelis: Ladia Haveli, Goenka Haveli and Chokhani Double Haveli. These were all 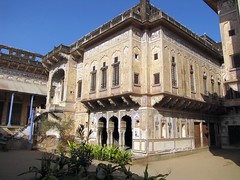 absolutely gorgeous with lovely painted frescos but the one that really excited us was the Double Haveli, which was basically two Havelis connected by a common roof-top terrace within a large compound. Even though the gatekeepers charged us an entry fee of Rs.50, the place didn’t look like it was getting any special attention from them or the owners. One of the gatekeepers walked us through one of the havelis and also took us to the roof-top from where we had a bird’s eye view of Mandawa. By the time we exited the compound and walked back to our hotel, we realized that we had had enough of these painted murals and knew that we had made the right choice by selecting only a few villages for visiting; anything more would have been an over-dose!

Since Mandawa is one of the more popular night-stay options in the Shekhawati region, its market area has quite a few handicrafts and furnishings stores dedicated to travelers. We loved browsing thru all of these and talking to the store owners, who were mostly a bunch of friendly, enterprising folks, ready for a few minutes of chat. We bought a couple of pairs of Jodhpuri Joothis (sandals) for our nieces from a young lad who claimed to have worked in Bombay as well. Later we bought a lovely bed cover with matching pillow covers from a stately Marwari who had worked in Bombay and Gujarat and seemed to be quite worldly-wise. We chatted with him for nearly an hour over cups of tea and enjoyed the shopping experience thoroughly!

That afternoon we took a cab to Mahansar Fort and then spent the following 2 days soaking in rural Rajasthan from within the walls of the fort-palace. It was the perfect way to wind up our Shekhawati tour.

Overall, we were quite pleasantly surprised by how unique the Shekhawati region turned out to be from the rest of Rajasthan. It’s only now that we are beginning to understand why this state is one of the most popular destinations of travelers from around the world – it has so much varied stuff to offer! We are definitely hooked for life and know that we will be back over the years to explore and experience more of it.