Madhu and I are great fans of India’s wildlife sanctuaries and national parks. In this trip we’ve tried to visit the most popular ones around the country and have always come away pleased (well, except for maybe the Sunderbans!). Tal Chappar Wildlife Sanctuary cannot really be termed as a ‘popular’ park, in fact I had never heard of it before, but the fact that it lay on our way from Shekhawati to Nagaur and that it uniquely houses India’s famed Black Buck, drew us there! Thought short, it was a wonderful visit!

Located about 85kms from Churu, the Tal Chappar sanctuary lies on the Ratangarh-Sujangarh road, connecting to NH65, which runs south to Nagaur and Jodhpur. The highways

were marked with large hoardings pointing to the park entrance, which helped a bit, but we still had to ask some locals to get to it. Inside the park, we found a few men, caretakers and guards, sitting around chatting amiably. They looked at us curiously making me wonder if we would even be allowed inside. Thankfully, we were allowed but not in our car we were made to hire a horse-drawn cart where the horseman also doubled up as our park guide. It was a cheap, unique and exciting way to see a wildlife park!

Lying on the fringes of the Great India Thar Desert, the most fascinating thing about the park is that it is a vast tract of absolutely flat land with small, rain-water filled, shallow areas and scattered shrubs and Acacia trees. Although I haven’t seen it myself, it’s said that this landscape is similar to the African Savannah. We had unhindered view of the entire parkland as soon as we entered it, which was wonderful! Though it was around noon, the weather was pleasant with a slight breeze and that made our horse-cart ride quite enjoyable. The Black 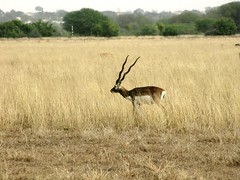 Bucks were huddled in large groups across the flatland so we set off towards the nearest group but not before stopping to see some lovely, colorful birds nestled atop trees. Our horseman seemed knowledgeable and keen on giving us a good experience so he happily stopped whenever we asked him to, described the birds in details and also insisted on taking some pictures for us!

Known as the most elegant antelope, the Indian Black Buck is an endangered species, which has led to
quite some controversial issues regarding its conservation; not surprising when it comes to Indian bureaucracy and government apathy towards animals. However, this sanctuary looked like it was being maintained well and that gave us some hope for these absolutely striking creatures. The male Black Buck is quite a looker with his black, brown and grey coat and spiraling horns. The females looked quite different and unremarkable in their fawn-colored coats, alert eyes 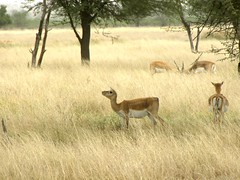 and ears and no horns cute all the same! Our horse-cart took us as close to them as possible, which is not very close, considering how shy these beautiful creatures are. They watched us from the corner of their eyes and steadily walked further away whenever we were too near for comfort! Still, it felt wonderful to be amongst them, in their unique habitat and observe them leisurely!

Further inside the park, we were utterly delighted to spot a large group of grey Demoiselle Cranes. Apparently these migratory birds, along with a host of others, stop by here every year between September and March. They were sitting along

the banks of a mass of water when first spotted by our horseman. We immediately set off towards them but didn’t get too close. In fact the horseman dropped us off at a safe distance and asked us to walk towards them as carefully as possible without alerting them.  But these alert birds turned out to be even shyer than the Black Bucks. As we walked towards them, they simply walked further away. When we hastened to get closer they shuffled their feet and eventually flew away. They looked gorgeous as they soared above our heads and found a safer place in the park to rest.

While we stalked the cranes, a large

intimidating-looking Nilgai stared at us warily from a distance. Unlike his shy companions, this handsome buck stood his ground and dared us to come closer, which we obviously didn’t. His grand frame made for some wonderful pictures and that was good enough for us. We didn’t feel safe enough until we got back to our horse-cart and clambered aboard!

The Tal Chappar visit was about an hour-long and wonderfully refreshing. We wondered what it would be like to stay overnight and visit it during the early morning or late evening hours when the lighting and weather would have been absolutely gorgeous! The park officials pointed to a set of new structures overlooking the parkland that were still under construction and informed us that this would eventually be a govt-run guesthouse where visitors could stay and visit the park at their own leisure. Since the Chappar village, where the park is located, doesn’t have any other facilities this guesthouse would be the only option. Madhu and I had enjoyed our visit so much that if this guesthouse had been ready, we would have definitely stopped for the night! Oh well, at least we got to see the park’s wonderful black beauties … an unforgettable experience!

One Response to Tal Chappar Sanctuary