Our 3rd day in Udaipur began with a visit to the beautiful Bagore ki Haveli, built in the 18th century by a former minister of the region. The entrance to the haveli is right by the Tripoliya (3-tiered gate) at Gangaur Ghat. The gate is also part of the haveli and built around the same time. We bought entry tickets and entered the haveli’s lovely courtyard. From here, the black stone Jharokhas, overlooking the courtyard, looked absolutely fantastic!

The haveli has been restored and opened to the public only recently. Until the 1980s it was used as a guesthouse for government employees and that obviously led to a lot of deterioration. 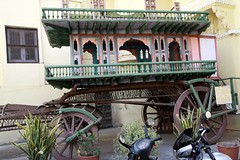 It is a huge haveli; there are 138 rooms set around the courtyard. However, we could tour only a small part of it and this itself was gorgeous! Some of the restored rooms displayed artifacts, furniture and furnishings used during the time of royal residence, while others displayed cultural scenes of the region. The glass inlay work in some rooms was really amazing. There was also a room displaying different turbans, including a huge one, which is rumored to be the world’s largest. The haveli also has a small but interesting collection of contemporary paintings. We loved browsing thru all of this and took tons of pictures. To give foreign visitors a taste of Rajasthani folk music and dance, an event called Dharodhar is offered every evening at the haveli.

From here, we took an auto (return fare) to Shilpgram. It was mentioned in Lonely Planet as a nice fair that showcases the western region’s (Rajasthan, Maharashtra, Gujarat and Goa) culture and handicrafts. 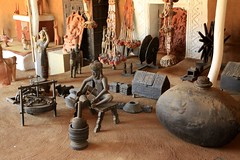 Our hotel’s owners recommended it as well, so our expectations were high. But when we got there, it didn’t match up at all. It’s 3km outside Udaipur’s old city and set in a huge ground. Apart from us, there were just a handful of other visitors aimlessly walking around. The staff at the grounds were busy painting or working on some of the huts displayed here. We later found that starting Dec 21st there is going to be a huge festival and everybody was preparing for it. As of now, there’s nothing to see or do; the place looked dull and boring. On display were mud homes from the different states and also a tribal museum as well as a utensils museum – both were interesting. There were a few handicrafts store as well but nothing special. We browsed through the stalls and spoke to one artist who proudly displayed a certificate that showed their acceptance into the Limca book of records. Apparently his father had created some miniature sculptures in metal that were smaller than the size of a thumbnail. I was hoping for some interesting food stalls from the different states but even that was lacking; we just found one restaurant with the usual stuff. Shilpgram had been a complete waste of time!

Later, we took the same auto back to Udaipur where we had lunch and then returned to our room for some rest. In the evening we walked back to Gangaur ghat and enjoyed the lovely atmosphere there. From the steps of the ghat we could look out across the lake to Hanuman Ghat and also to the two palaces in the water, Lake Palace and Jagmandir Palace. Some locals were bathing at the ghat, while others were selling stuff to the visitors. One man played the sarangi beautifully and it was really nice to listen to his music while enjoying the scenery.

As we walked back to our hotel, we stopped at a jewelry store called Gem Handicrafts, owned and managed by 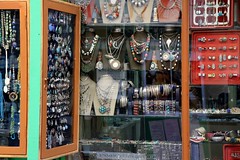 Ms. Prerna Kothari. She had a very friendly demeanor so we sat awhile chatting with her and browsing thru her fantastic jewelry collection, which was mainly in silver. I ended up selecting a silver pendant, which was beautifully made. I also noticed that Prerna advertised ‘No Pain nose and ear piercing’ . I had pierced my nose way back but had never worn a nose ring consistently. Lately, especially since embarking on this trip, I have been craving to get my nose pierced again. But for a person afraid of even needle shots this wasn’t an easy thing to sign up for . But Prerna encouraged me by promising that it won’t hurt at all. So I finally gathered courage and got it done! And like she promised, it didn’t hurt at all!! Well, it did hurt a wee bit but nothing more than a needle sting. When it was all done, I couldn’t believe that I had finally done it! Yippee!! I have a stone stud now – once the wound is healed, about a week from now, I hope to replace it with a tiny silver ring, which I bought from Prerna .

Today, our 4th day in Udaipur, we hired a private car for Rs.1100 to take us to Kumbalgarh and Ranakpur, which are about 90km northwest of town. We left at 8am and made it to our first stop, Kumbalgarh, 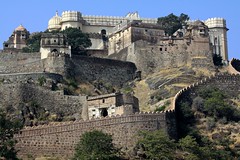 around 10:30am. Built of stone on the Aravali hills by Maharana Kumbha in the 15th century, the walls of the fort are said to be the second longest in the world after the Great Wall of China – amazing! We bought tickets worth Rs.5 each at the entrance and noticed that we’ve been getting a nice, postcard-sized paper with lovely colors and the words ‘Incredible India’ printed on them, as the tickets for such govt-managed monuments. Apparently, the govt has issued these as recently as a few months ago as part of their efforts to manage these monuments better. Someday in the future ‘passes’ will be available – they can be used to enter a fixed number of govt-managed properties over a certain period of time, anywhere in India. This is similar to the National Parks pass available in the US for entry into any US National Park within a year; a great, money-saving concept, which will be especially useful to foreign visitors who are charged much more (at least 10 times more) than Indian visitors.

We were happy to find a refreshments stall inside the fort entrance with decent bathroom facilities. After breakfast, we wandered uphill to the palaces at the top of the fort. The whole place was beautifully maintained. Landscaping was nicely done and made for excellent pictures. However, there were no guides available and no marking anywhere so we couldn’t learn much. The views from the top of the fort were gorgeous. Lonely Planet mentioned that there were many small palaces and hundreds of temples within the walls of the fort and we could see many of these strewn around – it was a lovely sight. At the top, we entered a palace with a small courtyard in the center and narrow steps leading to the terrace from where the views were even better and the windy weather, very refreshing.

Back at the base of the fort, we visited 2 temples that were close by. One was a lovely, pillared temple with a huge, black stone, Shiva Lingam within. The other had fantastic carvings but no idols within; they looked quite deserted. We noticed that a small population lived within the fort walls and their colorful little homes looked incongruous against a landscape of huge, pillared stone temples and palaces.

When we were planning the Ranakpur outing, I wasn’t sure if we should stop at Kumbalgarh ‘coz I wasn’t sure if the fort would be worth a stop. Well, it definitely is! The views are beautiful and the place is absolutely breathtaking!

Our next stop, Ranakpur is famous for its 15th century Jain temples made of marble. As expected, the temple complex has nice landscaping and proper parking facilities. Entry to the temple was free but we had 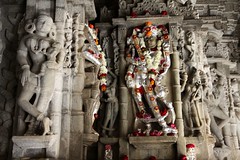 to buy a permit for the camera. Unfortunately, the place was quite crowded with tons of foreign and domestic visitors. We removed our shoes at the base of the main temple and walked up the marble stairs in to the lovely interiors. Not that we counted, but the temple is said to 1444 pillars!!! And they were all carved exquisitely, with no two alike – unbelievable! The carvings here, especially those on the marble ceilings, were quite similar to the ones we saw at Mount Abu’s Dilwara temples. In spite of the crowds, Jain temples have a sense of serenity about them that’s really nice. Madhu and I found a quiet corner and sat quite a while. My favorite section of the temple was a pillared hall with a huge marble elephant in the center – such an unbelievable place!

There’s also a sun temple across from the main temple from where views of the latter is quite nice!

It was a 2-hour ride back to Udaipur. It had been a long but fantastic day. I’m glad we hired a private car and didn’t bother being too adventurous by taking local buses (like we’ve done in the past!). It wouldn’t have been possible to cover both Kumbalgarh and Ranakpur in 1 day in buses. Moreover, it would have been too tiring; the car was nice and comfortable!

We’ve been in Udaipur for 4 days already but have no plans to leave . We have extended our stay by another night. Everybody is soooo warm and friendly. The first evening itself we had made friends at the Ashoka Arts store. Over the past 4 days we’ve made more friends – the local barber who trimmed Madhu’s hair, the local bangle seller who never once bothered selling anything to us except chatting about Udaipur, Prerna the owner of Gems Handicrafts who keeps offering us chai as we walk past and an elderly tailor who was down with a bit of fever. Such fantastic people! I’m sure if we stayed longer, we would soon know everybody within the old city of Udaipur . We’ve never felt this warmth anywhere else and it is this that keeps us here longer – a very special experience!