I’m sure spirited travelers can cover all of Udaipur’s sights in a couple of days or maybe 3. But we seem to be taking it real easy and are in no hurry, whatsoever. So yesterday was our 5th day here and we still had a few things left to explore. In spite of that, mid-afternoon, we found time to watch Rocket Singh – Salesman of the year, in a nice theater in the newer parts of town – an afternoon well spent!

Saheliyon ki Bari is a quaint ornamental garden laid outside the old city for 48 female attendants that came along as part of a princess’ dowry. 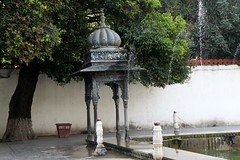 Our hotel guys said that we should only bother visiting it if we have the time. We had plenty of time, so we visited it yesterday morning out of sheer curiosity. It turned out to be a small but beautiful garden. There were lovely water fountains, marble statues and marble kiosks. Because of the grand landscaping, a couple of old Hindi films have also been filmed here. We walked around the gardens, sat a while, took pictures and marveled at the huge, flowering Bougainvillea vines that grew over the mango trees. There is also a small Natural History museum at the back of the gardens, which can be avoided unless you like to see pickled reptiles in small jars …!! Across the street from the gardens, we got conned into visiting a ‘museum’, which turned out to be nothing more than a handicrafts store – such scammers!

Later we caught the 12:30pm show of Rocket Singh at Ashok Theater. We ate at the attached food court, which had surprisingly good (and reasonably priced) food. We tried some chaat and it was actually very good – this along with a well-made movie made my day!

After the movie, we took an auto back to City Palace. Madhu’s friend, Soumya had recommended the boat rides on Lake Pichola, offered by the palace. So we bought tickets, which were a tad bit expensive at Rs.300 each (yes, extended traveling makes one cheap). However, to get to the dock from where the boats are launched, we had to enter the palace courtyard and for this we were charged Rs.25 each additionally – the royal family seems to have a keen sense of business!

It was a longish walk to the dock, which was at the back of the palace’s extensive grounds. En route we passed 2 restaurants that looked quite exclusive. 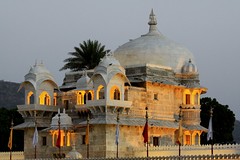 One set on a terrace against the backdrop of the lake, looked especially nice! We took the 4pm boat, which was a small motor-launch with about 20 to 30 seats. It made a slow arch around the lake and we were enthralled by the sight of Udaipur from the water; definitely worth Rs.300. We passed the magnificent Lake Palace on Jagniwas Island and were able to take some good pictures of it. The boat deposited us at the other island, Jagmandir. There we were told that return boats would leave every 15 minutes but we were welcome to hang out at the island until 7pm, when the last boat leaves. So we took the opportunity to explore the palace grounds leisurely.

Right near the entrance, where the boats dock, is a row of elephants, beautifully carved out of marble – they give a great impression as you walk up the stairs to the palace. 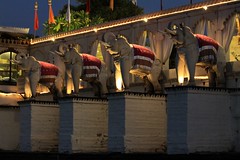 The palace itself, built in the early 17th century, is said to have been the inspiration for Shah Jahan’s Taj Mahal (although, I find this a little hard to believe!). The dominating and most impressive feature of the palace is a huge chhatri made of blue-grey stone, which is unbelievably beautiful. Across from the chhatri is a small terrace from where we had fantastic views of the lake and the lovely City Palace. Behind the palace is a neatly maintained garden where we spent majority of our time at the island. Many lavish weddings are held on these lawns. Apparently, Raveena Tandon’s (Hindi film actress from the 90s) wedding was also held at the same place. We sat here 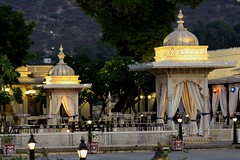 and waited until sunset, which was around 5:30pm. By this time the whole place was just magical. Madhu whipped out his camera and took a frenzy of pictures, which turned out great. Later, we took the 6pm boat back to the city. This time around the boat didn’t arch around the lake; it went directly to the dock behind the palace.

Instead of walking back the way we came, Madhu and I took a different exit out of City Palace and were deposited in a different part of the old city, which was completely alien to us. But we knew that the city was not big enough to get lost, so following the direction of the main entrance to the City Palace, we walked along narrow lanes until we got back to Jagdish chowk, which was familiar to us. En route we had seen some excellent handicrafts stores, which seemed to have great quality stuff. We were glad to have accidentally found this street.

This was to be our last night in Udaipur but once again we did not want to leave. We told ourselves that we could stay one more day to relax, watch the one-day international cricket match between India and Sri Lanka, catch up on our blogs and do some shopping before heading out. So for the 3rd time in a row, we asked our hotel guys to extend our stay for one more night. They had a grin on their face when we made the request.

Today, as planned, we spent most of the morning watching the fun cricket match (a great batting contest – each side made more than 400 runs – which we eventually won), updating our blogs and shopping, the MOST fun activity. We bought a miniature painting made on camel bone from Ashoka Arts. It was of very fine quality. Apparently the ones on paper or silk can never get the same intensity as the ones on bone, so these are a little more expensive. We paid Rs.1,700 (after some hard bargaining) for our 4″x10″ painting while the same, in silk, would have been less than Rs.1,000 – paper ones would have been even cheaper. Later in the evening we bought a wooden, 1 and 1/2 feet tall, Pehredaar aka Dwar Palak (door guard). It was a painted piece and the wood was made to look old and rough, to give it an antique feel. Traditionally, these are placed in a pair outside the main the entrance of the house, one on either side. But it’s hard to find enough space for 2 of these in modern-day flats, so we bought one that could be placed in any corner or on any shelf as decoration. The shop owners wrapped it up in paper and bubble wrap so that we can carry it safely back with us.

Udaipur’s stay has been absolutely magical. We loved the charming havelis, the narrow lanes, the beautiful glistening water palaces and most importantly, the Mewar people. They were all incredibly warm towards us. We felt completely at home here and could have stayed indefinitely. There are still a couple of sights, like the Monsoon Palace, that we didn’t visit over the last 6 days. But we are not worried; we know that we will definitely visit Udaipur again someday. Moreover, this place has some amazing handicrafts, which would be great for home decor. So we know that next time we buy a house, we will definitely drive out to Udaipur to load up on some of this stuff!

Tomorrow, we plan to head to Bundi, which is about 250km west of Udaipur. En route is the wonderful fort at Chittor, so that will be a quick stop as well. For this we have booked a cab thru Shahid who had driven us to Kumbalgarh and Ranakpur 2 days ago. Since we didn’t go thru a travel agency and had called Shahid directly, we got a better deal at Rs.2,100. When we checked with other travel agencies we got numbers between Rs.2,500 and Rs.2,800, so Shahid’s was the best offer.

Looking forward to the road trip to Bundi …. but also sad to be leaving Udaipur. Almost everyone we spoke to, and even the guide books, said that there’s no place in India like Udaipur. And we think that’s absolutely true!!