On Dec 10th, we boarded an 8am bus from Mount Abu to Udaipur; it took about 4.5 hours. The bus deposited us in the city suburbs from where we took an auto into Udaipur’s old city, which is its cultural heart. The newer parts of Udaipur looked like any other small town but once we entered the old city, things looked quite different. For one, the streets were much narrower – two autos would not fit alongside each other. Plus there were stores after stores of handicrafts, furnishings and garments. 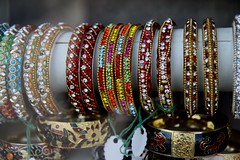 It looked a lot like the quaint and colorful  little towns of Italy that we had loved so much. For avid window-shoppers like us, our Udaipur stay suddenly seemed very promising.

We checked into Jaiwana Haveli, which is in the center of the old city and therefore, quite ideally located. Tired from a long bus ride, Madhu and I lazed the afternoon away in our hotel room. In the evening, we decided to head out to the streets, get some chai, walk around and and familiarize ourselves with the place.

Even as we took our first few steps on to Udaipur’s streets, we knew that we were in a special place. The city has a feel, a kind of charm, that is hard to describe. Maybe it’s because of the narrow, old-world lanes or the beautiful havelis that are around every corner or the friendly faces that stare out of every store. There were also tons of restaurants and cafes. After having trouble finding good restaurants in Gujarat, Udaipur seemed like paradise!  Not sure why it’s known as Rajasthan’s most romantic city but it’s definitely in the air !

We had chai and some snacks at a nearby cafe. While lounging there, we noticed that it shared a common courtyard with a store called Ashoka Arts, which displayed many miniature paintings and wooden  handicrafts. We remembered reading about this store in LP. It mentioned that the store offered classes on miniature paintings. Madhu and I were intrigued and since we had no sight-seeing plans for the evening, decided to check it out. Read more about our painting escapades here …

The next morning, we headed out to City Palace, Udaipur’s top attraction. It was a short walk from our hotel. Since it’s a privately owned and managed property, 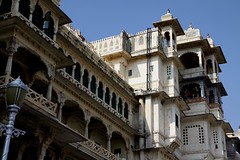 the entry tickets were relatively expensive – Rs.50 per head and Rs.200 for a camera permit. The entrance to the palace is distinguished by a beautiful, triple arched gate called Tripoliya (3 gates). It opens out in to a large courtyard, which has a bit of grassy area in the center with handicrafts stores on either sides. Apparently, the items sold here are directly sourced from local artisans and the proceeds from sales go to a trust that maintains the ancient temples in Udaipur.

The palace itself is very, very interesting. On the outside, the facade is an incongruous mass of jharokhas and chhatris; nothing looks symmetrical. 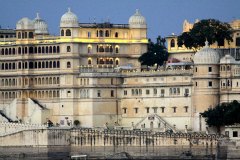 We later learnt that this was mainly because it is not just one palace, but many palaces built over 400 years by different rulers of the Mewar region. We hired a guide for Rs.100 thinking that we wouldn’t be able to appreciate the place on our own. Unfortunately, he turned out to be a bad choice as he delivered a very dispassionate commentary about the palace; didn’t even look interested in the job. We patiently waited till he showed us around completely. Then we reentered the palace to see it at our own pace again. Thankfully, the security guards at the entrance didn’t mind us going back in again; maybe other visitors have done the same…

The palace has a series of small tunnel-like stairs that lead from one mini Mahal to the other, followed by beautiful courtyards or terraces that give excellent views out to Udaipur. One of the highlights was a courtyard built on the 5th floor of the palace. 104 pillars surround it on all 4 sides with a huge tree smack in the center … yes, a tree! Apparently, the courtyard juts out of the palace like a balcony and rests atop a hilly outcrop, which allowed the architect to have a tree planted in the center – very ingenious. Another courtyard, aptly named Mor Chowk (Peacock courtyard) had fantastic peacock glass mosaics and these were absolutely beautiful. There were also some painted doors with Radha-Krishna themes and these were gorgeous as well. Unfortunately most of the paintings and murals in the palace are behind protective glass, which don’t make good photographs.

The guesthouses attached to the City Palace have been converted into 5-star heritage hotels. There are also some very fine restaurants and bars here. Though super expensive, it must be a grand setting to have a late-evening meal! We were also told that weddings and other lavish events are held in the courtyards with the palace as a fantastic backdrop! Needless to say, this is probably not meant for the aam janta.

After the palace, we walked over to Jagdish Mandir, which is another landmark in Udaipur. 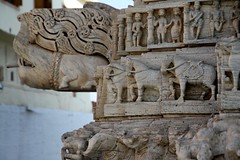 It was about 2 minutes away from the City Palace entrance. Climbing up the steep, marble steps, we found the temple to be huge and quite nice. It was nothing spectacular but a lovely temple, nevertheless. We spent a few minutes walking around the main structure and marvelling at the lovely carvings. Inside, however, it wasn’t very impressive and a rat running around the periphery scared me out.

By this time, it was almost 2pm, so we stopped at a cafe across from the temple. One thing about Udaipur – most restaurants are part of the hotels and are on the roof-top of the hotel building. So they all offer some view or the other. The more popular ones are those that offer views of Lake Pichola. The one we walked into for lunch gave a splendid view of Jagdish temple’s huge shikhara.

After lunch, we went back to our hotel room and relaxed the afternoon away. Since our hotel offers wireless, we were able to spend some time updating our blogs and catching up with emails. We went back out in the evening but again just walked about with no particular aim. I got some mehndi done on my palms, while Madhu visited a local barber for a much-needed trim. We had initially planned on spending just 2 or 3 nights in Udaipur. But seeing how much we were enjoying its laid-back charm and since there was still tons to see and do, we decided to stay on for 2 more days.