One of Eastern Sikkim’s most popular attractions, at least amongst domestic tourists, is visiting the Indo-China (Tibet) border. This coupled with the chance of seeing snow makes it a ‘must-experience’ for most. But permits are required to get up there and can only be accessed on rugged jeeps that can tackle steep roads. This is milked by the travel agencies to the maximum. They offer shared-jeep rides to the border for Rs.600 (more during peak season) per head with 10 people crammed into a vehicle that should comfortably seat just 8. When we asked if we could get a jeep to ourselves, we were quoted a minimum of Rs.3500, which seemed way too much to cover a distance of just about 60kms and back. Not wanting to waste money, we opted for the shared ride. Needless to say, it wasn’t a fun trip¦

We were asked to report to the travel agency’s office at 7:30am, which we promptly did. From there we were escorted to the private jeep stand, which was just across the street and seated in the front seats (next to the driver) of a Mahindra Jeep. Then we were driven to another jeep stand from where we were to pick up the rest of the passengers. Much to our annoyance, we sat in that parking lot for nearly an hour while the car filled up and our driver waited for someone from the travel agency to bring us our permits. Apparently, even though we had given our photos (2 passport-sized ones) and a copy of our drivers’ licenses the previous day, the agency did not apply for our permits until the morning of departure – Lord knows why! So by the time we started out on the drive it was past 9am .

connects Sikkim to China’s Tibet region and was an important trading post during the Silk Route days. In 2006, it was reopened for trade and for visitors as well. At around noon (yeah, it took 3hrs to cover 60kms!) we were dropped off near the parking lot and told to return in half an hour to forty-five minutes as we had 2 other sights to cover and lunch to eat before starting on the long return journey.

Army personnel kept a wary eye on us as we 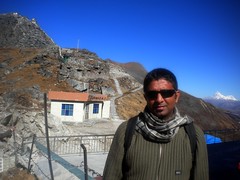 climbed up to a viewing platform from where we could peek down at the fence and gate that separated India from Tibet. There were bunkers on the far side as well but we couldn’t spot any Chinese officials – would have been fun if we had! Even though there was nothing really to see out there, it was just interesting to be at an international border, which is not always peaceful. Many visitors took pictures with our army men; I wanted to too but was a little shy of troubling them with the request.

Madhu and I wandered down to the parking lot at the agreed time and were not surprised to find that none of the other passengers had returned. About half an hour later one of the two families returned and explained that the thin mountain air had caused some breathing issues because of which they had to rest a while; we sympathized! A few minutes later the other family showed up as well but one of their members was missing. They didn’t offer any explanation so the rest of just kept waiting. He finally showed up about half an hour later and didn’t even have the decency to apologize for keeping us waiting. Madhu and I were seething with anger but there was nothing we could do about it – you get what you pay for!

Our next stop was at the Baba Harbhajan Singh temple, which is dedicated to a martyr, Capt Harbhajan Singh. He died somewhere near Nathula Pass, after which the shrine was built in his honor. Army personnel believe that his spirit is continuing to guard the region and protect the soldiers. We stopped here for a few minutes, paid our respects and left.

Some 15kms downhill from Nathula Pass is the serene Tsongmo Lake (aka Changu Lake). It’s

a pretty mass of glacial water but apart from standing around and taking a couple of pictures at its shore there was nothing else we could do out there. I wish the govt had built a walking path around it and provided some benches for visitors to sit in and relax. But with none of that available we didn’t hang out for long. Of course, there were the usual vendors selling snacks and offering rides on beautiful, yet sad-looking yaks.

A few meters from the lake we stopped at a market area for lunch. Because of the late-comers it was almost 2:30pm by the time we got to eat some chowmein and omelets. And then once again they delayed our return journey by disappearing into the market to buy ‘Chinese’ goods! When they finally returned there was no apology for the delay either – grrrrr! It was almost 3:30pm by the time we started back and Madhu and I swore we would never share another ride with Indian families ever again!

In spite of the not-so-fun shared ride to Nathula, I’m glad we didn’t shell out Rs.3500 for the trip. I don’t think Nathula is worth spending that much money on. I just wish we had been able to share the ride with more like-minded, reasonable people. Oh well – one can’t have it all, can they??

The following day, we woke up leisurely and at around 10am boarded a shared jeep to Rumtek monastery, which is about 25kms southeast. Since we only managed to find seats at the back of a jeep facing each other, the one-hr ride felt long and uncomfortable. Thankfully, we were dropped off at the monastery’s entrance just before we got really queasy. 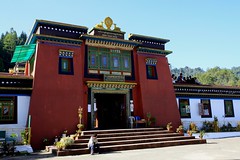 was built in the 16th century but fell to ruins over the years. In 1963 a brand new monastery was built in its place with the patronage of Sikkim’s royal family and the eager-to-please Indian govt. It is a large complex with many homes and stores, apart from the usual monastic buildings; it almost felt like a small village existed within the complex walls! But what surprised us most was the security detailed in and around the complex. At the entrance gates our bags were checked and Madhu was frisked (there was no lady guard to frisk me!). Then at the entrance to the monastery acouple of guards stood sternly with rifles in their hands. We were quite shocked by all this security as we had never encountered the same in any other monastery.

Apparently there’s a controversy over who should be elected as the 17th Karmapa (head of the sect) of Rumtek. Two opposing factions of monks are supporting different candidates for the post and this has brought on severe confrontations between the two groups; in fact, even an assassination attempt has been alleged by one candidate. Since then the Indian govt has posted this security detail to keep things under control! I find it a little hard to believe that such mild-mannered, devout monks could get violent over anything.

The new monastery is absolutely gorgeous with a lovely, enclosed courtyard and a beautifully decorated prayer hall. Through a side exit, we visited the Golden Stupa, which is housed inside a building and is enclosed in glass. It contains the remains of the 16th Karmapa and is therefore highly sacred. Just across from here is the high school for monastic studies. It has a colorfully and freshly painted exterior with pretty murals in the porch. No classes were being held when we took a peek inside.

Later we had lunch at a small family-run eatery, which was just outside the monastery complex’s entrance gates. We had a fabulous feast of rice, dal, vegetables, papad, salad and Chicken Chilly – all for Rs.230 ! And just as we paid for our meal and left, we were able to board a shared jeep back to Raniphool and then a shared Maruti Omni back to Gangtok; a day well-spent!

4 Responses to Around Gangtok