Our hotel manager arranged a cab that would take us to the monastery at Tashiding, the village of Yuksom, the sacred Khecheperi Lake and back for Rs.1900 (bargained down from Rs.2200). He advised that we start early, at 7:30am, as otherwise it would be difficult to cover all three sights. Even though waking up before 7am on such cold winter days had become next to impossible for us, we dragged ourselves out of bed, dressed, had breakfast and were at the reception desk at the promised hour. Unfortunately, neither the hotel manager nor the Sumo driver expected us to do so – they must have been sure of Indian travelers never being on time ‘coz they both showed up several minutes later with the latter making an appearance at 8am while we sat in the cold waiting! Oh well!

The road to Tashiding is absolutely gorgeous with greenery and mountain views everywhere. In our minds we couldn’t help comparing this to the bare mountainous region of Ladakh and wondering which was prettier! However while the major highways of Ladakh are in pretty good condition (except of course for the Zanskar valley) here the roads are yet to be developed fully. They are not bad but require quite a bit of work at certain stretches. At one point we were sailing smoothly when suddenly the road disappeared from before us – a landslide had destroyed it completely. We were shocked that no barricade or sign had been posted to ensure the safety of vehicles that may unknowingly pass that way. Luckily for us it was day time and we had an alert driver – any other combo could have led to a fatal accident!

Built in the 17th century Tashiding Monastery belongs to the Nyingma sect of Tibetan Buddhism. When originally built 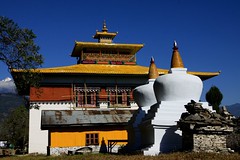 it was just a small assembly hall but additional structures were added over the years and is today a modestly sized complex that includes prayer and assembly halls, large, colorful prayer wheels and some wonderful chortens. We were able to visit both the floors of the main structure and enjoy the beautiful murals and idols within. But what excited us the most was a bunch of stray dogs (at least 6 to 7 of them) that were lazing and sunning themselves in the monastery’s compound. They were absolutely adorable! Apart from musically-inclined, well-dressed locals, we have come to associate Sikkim with super-friendly dogs as well – haven’t seen friendlier dogs in any other state!

From Tashiding, Yuksom is just 19kms northwest. The word Yuksom literally means ‘meeting place of three monks’; they came here from Tibet. The first king of Sikkim was crowned in this village by them. It was then declared the first capital of the region and therefore grew to have immense historical significance. But today it is more popular as a base for those wishing to trek in the neighboring mountains. Since the weather was a little too cold for us, Madhu and I had decided to forego any trekking for now – maybe some other day!

We were in Yuksom within an hour and were dropped off at the Coronation Park, which is the actual site where the first king was crowned by the three monks. The site includes a monastery, chortens, a large prayer wheel (enclosed in a beautiful structure) and the coronation throne. All of this has been fenced in and maintained nicely as a park with a walking path winding through the structures of importance. The biggest attraction is, of course, the throne, which has four seats: one each for the monks and the king. It’s a unique stone structure framed by a large tree at the back.

We visited the Dubdi Monastery (aka Yuksom Monastery) next 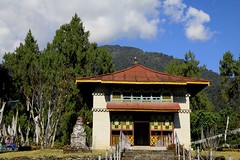 but for this we had to trek for an hour (about 3kms) uphill through a thickly forested area. The path was steep and took our breath away! Thoughtfully, several shaded platforms have been provided along the path, which gave us an opportunity to rest our limbs and hearts before courageously proceeding. When we finally got to the top, we were greeted by a monastery with a beautiful facade, set nicely in a manicured courtyard. Unfortunately, we couldn’t get to see the prayer hall within as the doors were locked and there was no-one around to help us. We were quite bummed as the monastery is said to house the statues of the 3 monks who were responsible for establishing the capital city. But it was a beautiful place so we hung out on a shaded bench for a while enjoying the surrounding landscape before starting on the knee-straining hike down.

Later we stopped in Yuksom village for lunch and ate a hearty meal of rice, dal and vegetables at the Gupta restaurant. While there, we noticed several groups of travelers and yaks (or dzos?) returning from multi-day treks back to the village – brave souls! Yuksom seemed alive with a lot of travelers lounging in restaurants or walking around. Compared to Pelling it seemed like a more fun place to stay.

Our last stop of the day was at the sacred Khecheperi Lake. 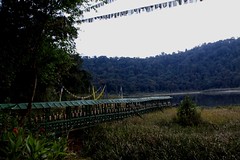 By the time we got there it was 3:30pm and the driver begged us to tour the lake quickly and return before it got too dark. We were charged an entry fee of Rs.10 each, which we later learnt wasn’t authorized by the govt . The lake wasn’t as spectacular as we had expected it to be but it was pleasant to walk along its tree-fringed edges in the company of a beautiful, black dog which decided to walk alongside. A long wooden deck lined with prayer wheels on either side juts into the lake at one end and here we were able to get within touching distance of the water. We spotted ducks and tons of small fishes. We had read somewhere that visitors can walk all around the lake’s edge but we couldn’t find a proper paved pathway to do that. There was a dirt trail that ran around the water through some overgrown grass and weeds but we weren’t sure where it would lead us. Since it was also starting to get dark we didn’t risk it and instead headed back!

By the time we got back to Pelling it was quite dark even though it was only about 6:30pm. The Sumo brought us through Lower Pelling, which seemed to be much more populated with a lot more restaurants and hotels. Upper Pelling is relatively more peaceful and village-like – definitely a more atmospheric place to stay!

Our tour of West Sikkim ended with this drive-around. Maybe someday we’ll return in more inclement weather to trek in the region and enjoy its natural beauty on foot¦

3 Responses to Day trip around Pelling