Gangtok, Hilltop of the North East

After touring West Sikkim we headed towards Gangtok, the capital city, which lies in the eastern parts of the state. To ensure that we don’t miss the shared jeeps that run directly between Pelling and Gangtok, we started early. But so did most of the locals. While we stood at Upper Pelling’s jeep stand, a couple of jeeps to Gangtok stopped by but the locals, who didn’t have as much luggage as we did, hurriedly pushed past and climbed into the vehicles, leaving no space for us. So we ended up standing there for quite a while unable to board any jeep. In the end, we walked down towards Lower Pelling, from where all the jeeps seemed to be originating and managed to flag down one heading to Geyzing, in the hope that there would be plenty of jeeps from there to Gangtok. Unfortunately, that was not to be. We only got a jeep to Jorethang and then finally another one all the way to Gangtok. Love the ‘shared jeeps’ system of the hills, though – it may be a super-crammed ride but it’s always super-efficient and super-affordable! Located on the Shivalik hills of the eastern Himalayan range of mountains, Gangtok is Sikkim’s largest town with roads that wind precipitously uphill and down. As our jeep rolled into town we were amazed to see vibrant streets with designer stores, restaurants, bakeries and tons of hotels. The heart of the city is pedestrian-only MG Road where all the tourists flock. Many hotels line this street but we opted for one on the National Highway 31A, near the private jeep stand. It was within walking distance of MG Road and wasn’t as expensive. On our first day in town, we walked southwest and downhill 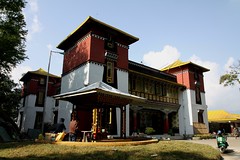 for about a kilometer to an area called Deorali market and then up a small hillock to the gorgeous Namgyal Institute of Tibetology. It houses a museum that displays Tibetan artifacts like Thangkas, sculptures and even manuscripts. The institute employs researchers that work on Tibetan history and its documentation. When we walked in through the main gates we were disappointed to see a ‘Closed’ sign. Apparently the institute was getting a fresh coat of paint and some other updates as the Dalai Lamaji was due to visit on the 21st of the month. So we could only gaze at the exterior of the building and the wonderful murals on the walls of the porch. Given how beautiful these murals were we could only imagine how beautiful the interiors must be. A few meters from the institute is the Do Drul Chorten, which is a large, white-washed Stupa with a beautiful, golden finial at the top. Built in 1945, it is considered to be one of the biggest Stupas of the region. 108 prayer wheels surround the complex, which houses young monks and prayer and assembly halls. Everything looked freshly repainted and immaculately maintained! We tried to visit one of the prayer halls but it was closed and all the Lamajis (young and old) looked busy with their mid-morning meals as they walked around with large plates of yummy-looking food. Later as we walked back down the hill and back towards Deorali market, we shopped at a handicrafts store, which was right across the road from the entrance to the Namgyal Institute. It had some interesting stuff and we couldn’t help buying some things for ourselves (curios) and some for family as gifts (curios and necklaces). At the base of the hill, we walked to a shipping store and were able to get the contents packed into a box and shipped to Delhi within a few minutes – all in a day’s work! The state govt operates a cable car 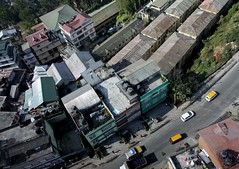 that starts from Deorali market and runs uphill to the highest point within town limits, which is the area called The Ridge. So instead of walking uphill all the way back to MG Road, we hopped on to the cable car (Rs.60 per ticket) and took in fabulous views of the city before alighting at an in-between stop from where MG Rd was just a few minutes away (and more importantly, downhill) on foot. Though short, the cable car ride is an interesting way to get a different view of the hilly and green city, framed by mountains! MG Road is a wonderful pedestrian-only street that is lined with restaurants, hotels, bakeries and stores, attracting locals and tourists alike. It is stone-paved with flower-beds, metal benches and street lanterns running through the center – it felt like a European plaza! Speakers hidden between the lanterns and shrubbery dole out great music (Sikkimese can never live without it!), rendering the place a graceful charm! We loved strolling through here and browsing through the various, overpriced handicrafts and curio stores! We had lunch at Baker’s Cafe, which overlooks the street and enjoyed people-watching – it was a lovely afternoon! From a taxi stand between MG Road and Tibet Road, we hired a taxi to take us to the other attractions of Gangtok, which are further north and would take an entire day if covered on foot. These included the Enchey Monastery and two viewpoints: Ganesh Tok and Tashi Viewpoint. Built in 1909, Enchey Monastery is one 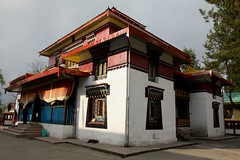 of the newer monasteries we’ve visited so far in our travels. It is set about 200m uphill (gentle grade) from the main entrance gates. The avenue is lined with prayer wheels on either side. These were being repainted in the typical Tibetan colors of yellow, red and black and were in various stages of completion as we walked past. The main prayer hall has a beautiful 3-storey facade with pagoda-style, gold-tipped roofs. Its interiors are as gorgeous as the exterior with beautiful paintings, masks and images of Buddha and Guru Padmasambhava enshrined within glass enclosures. Our next stop was Ganesh Tok, which is so called because of a temple dedicated to Lord Ganesha that is located below the viewing platform. The view out to Gangtok city was amazing but the crazy winds chilled us to the bone and made us hurry back to the taxi as soon as we could. By the time we got to Tashi viewpoint a heavy fog rolled in with more winds making it impossible for us to stand around for any view at all! Instead of dropping us back at MG Road we requested to be dropped off at Rachna Books, which is owned and managed by Raman Shreshta, who is the friend of a friend. It’s a small but lovely bookstore with nice decor and a good, assorted collection of books. It has a loft upstairs which will soon be converted into a cafe. When we popped by, Raman was busy entertaining some friends from international and local cultural groups and having a meeting in the upstairs loft. So we couldn’t hang out with him for long and left promising to be back later. With nothing more to see or do within city limits, Madhu and I headed back to MG Road and spent the rest of the evening browsing through more stores, sipping tea in a cafe while people-watching, sipping wine in a heated terrace-lounge for more people-watching and then finally walking to Tibet Road for a wonderful dinner at Arthur’s – it was a fabulous evening!

One Response to Gangtok