From Darjeeling as we gazed upon the mighty Kanchenjunga peak, we were told that the view is better from Sikkim where it is actually located. And that is absolutely true! In Pelling, our first destination in Sikkim, we felt like we had skipped over a few mountains and gotten closer to the peak; it looked amazingly majestic!

only between 7 and 11am in the morning. Unfortunately, by the time we got to the jeep stand, it was well past 11am and we had missed them all. So we had to take a jeep to Jorethang, which is a town in southern Sikkim right across the border from West Bengal. There, we were again a little too late for a direct jeep out to Pelling. So we boarded one to Geyzing (or Gyalsing as it is called locally) and then finally another which took us all the way. It was a tiring journey! But as we walked along Upper Pelling’s streets in search of a place to stay, the sight of Kanchenjunga looming to our right was beautifully refreshing.

More than the sights and views in and around Pelling, which were all expected, what surprised us most about the place was its musically inclined population. Right from the staff of the hotel that we stayed at to the street-side tea vendors and jeep drivers, everybody played the latest songs – English, Hindi, Nepali – and sang along with gusto . And most sounded to be delightfully in tune! Another distinct feature was that everybody was immaculately dressed. Pelling is a relatively tiny village but its inhabitants look like anything but villagers. Both men and women looked well-groomed in jeans and smart jackets and scarves! We even saw a couple of girls dressed in pretty capri-jeans out to collect wood for the winter night – an impossible sight in any other Indian village! It was a wonderful welcome to a new culture, quite distinct from the rest of the country.

Pelling is one of West Sikkim’s most popular stop-over as, apart from lovely Kanchenjunga views, it is a great base to explore the region’s monasteries, ruins and scenic beauty. On our first day about town we walked on the Pelling-Geyzing road for 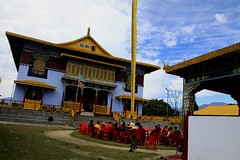 , which is off the main road on a small hillock. The climb was short and easy! Near the monastery’s entrance we saw many locals working on repainting and sprucing up the premises. We later learnt that the Dalai Lamaji was scheduled to visit within the next week, which accounted for all the preparations. Built over 300 years ago, the 2-storey monastery belongs to Nyingmapa sect of Buddhism and was used as an institution to train future monks. When we got there, some senior monks were in the midst of a meeting in the lawns before the monastery’s main entrance – probably more preparation for the senior-most Lamaji’s impending visit! Young monks (about 10 to 12yr olds) ran around the complex playfully with an eager, delightfully friendly, dog at their heels. We visited the main prayer hall but were unable to visit the upper floor. Later we exited the monastery complex through the small settlement of homes that tumble down the hillside beyond the grassy courtyard. 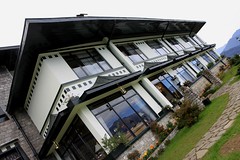 we found the entrance to the lovely Elgin Mount Pandim hotel. We were drawn to its picturesque location and ended up having pots of coffee and tea in their lawn, which has the best-ever view of Kanchenjunga Peak. The hotel is a luxurious heritage property and is part of the Elgin Group of Hotels, which has similar heritage hotels in Darjeeling, Kalimpong and Gangtok as well. We haven’t seen any of those but this property in Pelling has been quite nicely maintained – loved its relaxed, laid-back charm! If we hadn’t been backpacking, this would definitely have been our place of choice to stay!

Later we continued south on the Pelling-Geyzing road for another kilometer or so until we got to the entrance gates of Rabdenste Ruins. Along the way we could get fabulous views of the ruins, which also sits atop a hillock, albeit at a lower elevation than the Pemayangste monastery. The village of 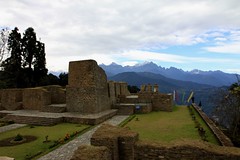 Rabdenste was the second capital of the rulers of Sikkim before it was invaded by Nepalese forces which destroyed the palace complex. Today it is completely in ruins with only a few standing walls. But it has been lovingly maintained and is therefore quite a nice place to visit. From the entrance gate, we walked about a kilometer uphill on a paved path that wound past a murky lake and through a thick forest to the ruins that sat atop. The walk was pleasant and quite pretty! But the ruins and their spectacular location were much prettier! We totally enjoyed browsing through the forlorn walls and gazing at the fabulous scenery around – it was the highlight of our day! A couple of local families sat in the well-maintained lawns of the ruins and picnicked happily. We noticed that they cleaned up after their meals to ensure that no trash was left behind; the Sikkimese seemed to be a lot more conscious of their social duties than the rest of the country’s citizens!

The following day we took a steep hilly track from Pelling 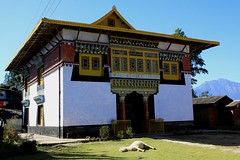 towards the lovely Sanga Choeling Monastery. It is one of Sikkim’s oldest monasteries and is picturesquely located atop a hill overlooking Pelling. The climb to it from Upper Pelling is about 3kms, which tired us quite a bit because of the steep grade. However the monastery at the top and the lovely views from there proved to be totally worth the effort. As expected this monastery was also being spruced up for Dalai Lamaji’s visit and everybody looked quite busy working away. A young Lamaji opened the monastery doors for us and allowed us to view the lovely prayer halls, which have been recently given a fresh coat of paint. Later we sat at the edge of the cliff and sat gazing at the village of Pelling and the hillocks atop which Pemayangste Monastery and the ruins of Rabdenste sat – it was a fabulous view and a great spot to chill! Our first taste of Sikkim has been very impressive!