When we first heard about this place called Dakshina Chitra at the outskirts of Chennai, we were not very sure if we should pay it a visit. It sounded a lot like Jaipur’s Chowki Dhani, which was literally a tourist trap with camel rides and henna artistes and bangle sellers. But our friends highly recommended Dakshina Chitra so we decided to go anyways. The hotel guys helped us hire a car for the day and we set out early! I’m so glad we listened to our friends; this day was one of the highlights of our stay in Chennai!

Set at about 30kms south of Chennai, Dakshina Chitra is a 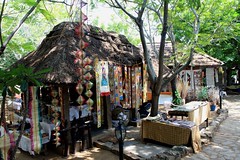 very nicely built handicrafts village emphasizing the arts and crafts of India’s southern states. The reception building housed the ticket counter, a store, an art gallery and facilities. Along with entry tickets we got a brochure outlining the things to see and do in the village and a map for directions. Just across from the ticket counter is a lovely store that had quite a few interesting handicrafts on sale. If we hadn’t been on such an extended travel, I would have definitely picked up a few things – paintings, brass diyas, embroidered cushion-covers – for our (future) home.

Behind the reception area, we were welcomed by a Tribal Drums group from Karnataka – it was fantastic! These tribals are known as the 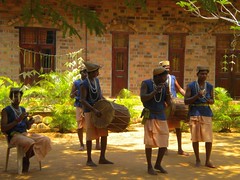 Koragas and currently there are just about 50,000 of them living in and around Karnataka. Their drum beating is believed to help eradicate evil forces. It was nice to get an opportunity to hear them. Beyond this was an alley with handicrafts stalls on either side. We browsed through here and couldn’t resist buying an applique wall-hanging. For children there were plenty of activities like Henna application, painting and jewelry making. There were also glass-blowers and Madhubani painters who could make an unique item right in front of your eyes and offer it on sale. The prices were quite reasonable too.

But the highlight of Dakshina Chitra is, hands down, the set of traditional south Indian homes rebuilt as models. Apparently these homes originally belonged to some family and had been pulled apart and reconstructed on-site in Dakshina Chitra! We spent majority of our time here, exploring the homes and admiring the construction work.

a Brahmin’s house, an agriculturist’s house and a potter’s house. They were all absolutely wonderful! The one with the nicest facade was that from Chettinad. It was a large home with a fantastic colonnaded porch. In fact, all the Tamil Nadu homes had wonderful porches but the Chettinad one had the largest and prettiest! Again all the homes had an inner courtyard around which the rooms were set. Some of the rooms contained informative displays on the region and/or house-ware and idols. The 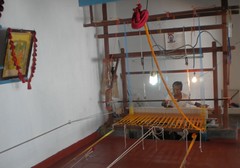 lovely urns and metal-ware had us salivating and we just couldn’t stop staring at them! Since it was Navratri time, a colorful Kolu (tiered platform of dolls) was set up in each home. In the Brahmin house an elderly lady offered to teach me how to draw a Kollam (rangoli with rice flour) or crush rice using the traditional stone grinder, for Rs.5 each. In the potter’s home we could try a hand at pottery as well! There was a large display of Tamil Nadu’s textile industry in the agriculturist’s home. The different kinds of materials and weaving methods used traditionally were on display.

In the Kerala section, the teak-wood homes completely bowled us 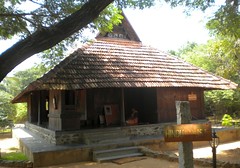 over! Even though we have relatives living in Kerala today, none of them have traditional homes; they’ve given way to the newer bungalow style, cement structures. Seeing what a traditional Hindu or Muslim or Syrian Christian home in Kerala was originally like, our hearts yearned for someone in our families to still have one of these! The polished wooden panels on the walls and ceilings gave the homes a fabulously warm, rich feel. Brass lamps, idols and accessories complemented the dark-brown tones of the wood. The Hindu home had a small room in which a traditional Ayurvedic massage table was placed. Back in the day, getting an oil massage before a bath was the norm; it’s a luxury in today’s world! The Syrian Christian home had a small boat hanging from one of its side porches and a granary in the center of the house. Of the three, the Muslim home looked more like 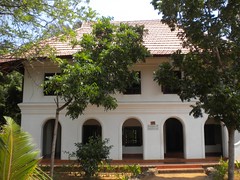 a Portuguese villa from the outside. However, inside it had the requisite wood panels and brass accessories that made up a traditional Kerala home!

There was just one home each for the states of Karnataka and Andhra. The former was built like a stone cottage with displays of the state’s handicrafts within. The Andhra home was one that could be found in the coastal regions of the state. It was a circular mud home with a large, circular room built within the outside walls. This construction apparently helps to keep the house warm and safe from the barrage of coastal winds.

After completing the tour of the homes we had lunch at a lovely restaurant on-site. It was operated by a Malayali Christian family and it was fun to chat with the manager in Malayalam.

On our way back from Dakshina Chitra we stopped at the Cholamandalam Artists’ Village, which is right by the road, some 18kms before Chennai. This is a unique place in India as it’s the largest such association of artists in one place. 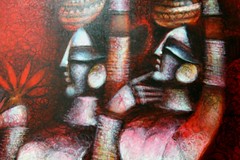 When it was founded in 1966, Madras (as it was known then), if not the whole of South India, was undergoing a revolutionary change towards modernism and brought to the fore many contemporary artistes who were recognized world-wide for their work. Today artistes are welcomed to join the group, live on-site in rented apartments and work on their paintings or sculptures, which can then be displayed or put up for sale in the lovely art gallery. The gallery was spread over 2 floors and 3 halls. We browsed them all and loved the painting styles of a couple of artistes, like that of a painter named A. Selvaraj. His paintings were worth about Rs.50,000 and above! This is a great place for connoisseurs and collectors of original paintings to pick up some nice work! For the rest of us, just gaping at these lovely pieces of art was totally worthwhile!

Our first stop in South India has been an overwhelming mix of culture, religion, spirituality and art. As we head south and deeper into Tamil Nadu we know that there will be more of this to experience and enjoy!

Open from 10 AM to 6 PM
Weekly holiday : Tuesdays.
Note : Open on all national holidays except for Diwali