With Rameswaram, we ended our tour of Tamil Nadu’s temples and were excited about heading to Kodai kanal where there’s nothing much to do except enjoy the area’s natural beauty. We caught a State 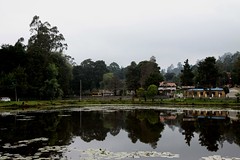 Transport bus from Madurai’s central bus station, which covered the 120kms distance in just about 4hrs. The NH49 highway out of Chennai is quite well-built and the ride on it was quick and smooth. At the Kodai Rd junction, the bus turned left onto a state road and then climbed the Palani hills, which was absolutely scenic! As we got further away from the plains, the air got considerably cooler; it was so refreshing! We love the hills!

Situated at about 2100m on the upper Palani Hills, Kodai is a popular hill-station with quick access from Madurai. Its tourist areas are by the western end of an artificial lake where visitors can go boating. When we got there the weather was cool and overcast with threatening clouds; it felt wonderful after the heat and dust of the plains! After checking into a small hotel on Bear Shola Rd, we walked back to the Seven Roads Junction where all the hotels, restaurants and stores are clustered. After lunch at Astoria’s Veg diner (opposite the bus station), we set off to explore the area.

A little south of the bus station, we stumbled upon the lovely, single-storied stone structure of the

Church of South India. It looked gorgeous from the outside but we couldn’t get a peek inside as it was under

some extensive renovation. A few meters from here is the northern entrance to ‘Coaker’s Walk‘, a paved path that runs along the edge of a green mountainside providing fantastic views of the valley below. It’s named after Lt. Coaker who is said to have prepared the map of Kodai in 1872. It’s a short walk but totally worth a stroll. It was very misty when we got there and we couldn’t see much of the valley below. But the mist had a beauty of its own and we loved walking thru it! 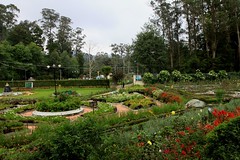 northern entrance to Bryant Park, one of Kodai’s green enclosures. It was a surprisingly nice garden with lush green lawns and flowering bushes of different varieties. It is most famous for the hybrid flowers that are grown here; some of the cut flowers are even exported. A glass house in the center of the park has a lovely display of the flowers grown here – it was very interesting! There was a large lotus pond as well but there were no blooms. The place was immaculately maintained and was well worth the entry ticket that we were charged.

We exited from the park’s western gates, which brought us to the stalls that border the Kodai kanal Lake. Kodai is famous for its locally made chocolates. So Madhu and I bought a few varieties of them from one of the stalls and munched on them as we began walking around the lake’s perimeter. Bikes are

also available on hire for those who would prefer them to walking the 5km distance. But personally I think the best way to truly enjoy the lovely landscape is to walk! The lake water beautifully reflected the green mountains surrounding it and had a wonderful evening glow. Apart from the natural beauty it was fun to peek at the gorgeous private homes that sit smugly by the lakeside; they surely have the best views ever! Since the paved path around the lake is relatively litter-free and crowd-free, our walk was fantastic and definitely the highlight of our Kodai visit!

Kodai’s hills provide many trekking opportunities for the adventurous. So even though I wasn’t exactly in the best of health (had caught a cold due to the sudden change in weather), the following morning we decided to hire a guide and do a half-day trek in the surrounding hills. Many self-appointed trekking guides loiter around the Coaker’s Walk area offering to take visitors on adventurous excursions. We met a few and finally agreed upon a 3-hr guided walk with a young, friendly-looking local. He first took us to the lovely Sacred Heart Church, which was just off St. Mary road with wide, terraced steps climbing up to it. The prayer hall was small but quite lovely and well-maintained. Then, just as we started to leave, a fine drizzle began. Soon the drizzle turned into a steady shower! We realized that walking in slushy mud trails in this weather would not be fun. Moreover, I didn’t want to get drenched and get any sicker than I already was. So we abandoned the plans to trek and turned back .

Our guide took us through a residential area that was a shortcut to get to the lakeside. On a street parallel to the southern lakeshore, we saw a large bungalow that belonged to Gemini Ganesan, one of Tamil cinema’s top heroes of the 50s. His daughter, Rekha, has been a top Bollywood actress of the 70s and 80s.

Instead of walking around the lakeshore like we had the previous day, a boatman ferried us across to the northeastern pier for a tip of Rs.10 per head. The 2-minute ride was wonderful and almost made us reminisce of the lovely Shikhara rides on Dal Lake. By this time the rain had abated to a slight drizzle so this emboldened us to sign up for a 20-minute row boat ride around the Kodai Lake. We paid extra for a Shikhara-like canopy over the boat to protect us from the rain. The ride was wonderful – nowhere close to the Dal Lake experience but nice and peaceful!

Later heavy rains made us retire to our hotel room for the afternoon. In the evening, it dried up again and we ventured out to take a look at some of Kodai’s other attractions. We hired a taxi from outside the hotel and asked to be taken to Pillar Rocks and Suicide Point from where views out to the valley were said to be superb. However, neither of them was worth the effort or money! Pillar Rocks turned out to be just a large outcrop of bare rock-face jutting out of an adjacent, green mountain-side. The viewpoint from where one can catch a glimpse of this was full of domestic tourists and street-side vendors who had littered the place completely. The Suicide Point viewpoint was suffering a similar fate and we couldn’t bear standing around for more than few seconds. If our taxi guy was surprised at seeing us hurry back from both places, he didn’t show it!

Kodai kanal, I think is a great retreat to escape from the plains and lounge by the serene lakeside. It’s nice as long as one avoids the kitschy attractions and sticks to staying in a nice place, enjoying the views, the pure mountain air and maybe some trekking.