Kumbakonam Temples are the set if 188 temples within the adminstrative limits of Kumbakonam. These were built between the 7th and 16th centuries by the various dynasties that ruled over it during this period. Since these temples were known more for their religious (and historical) significance than architectural, we decided to visit only the 3 most important ones … and that too only if we found time. Our main reasons for staying overnight in Kumbakonam were to break the long journey from Puducherry to Trichy and to visit the temple at Darasuram, which is just about 4kms from town.

The 12th century Airavatesvara temple at Darasuram is one of three temples classified as the Great Living Chola Temples in the UNESCO World Heritage list. The other two under this classification are the Brihadeesvara temples of 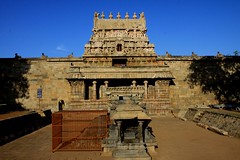 Gangaikondacholapuram and Thanjavur. From Kumbakonam we woke up early and took an auto to Darasuram, getting to the temple just around 7:30 AM. There was hardly anybody around at that time except for some elderly men who sat outside the temple entrance catching up on their daily gossip. In the morning light, the beautifully maintained temple complex looked quite serene. Its entrance is much grander than the traditional Gopurams of most South Indian temples. Here, it is at a lower level than that of the street with stone steps leading down to it. The 2-tiered Gopuram sits atop a beautifully pillared mandapa and is fronted by two smaller shrines. The one facing the temple complex houses a Nandi while the other houses the image of a Ganesha. Stone steps that lead up to the Ganesha shrine are said to have the ability to produce distinct musical notes when struck. Sadly, to prevent vandalism, these steps are now protected by an ugly metal fence.

We hired a guide, Mr. Durai, to show us around the complex and his narration helped us understand and appreciate the temple complex immensely! He showed us all the important features and highlights of the place without going into too many details on history or mythology – this was exactly what we wanted!

The front, pillared mandapa of the temple is built as a chariot that is pulled by horses. The image of a horse in front of a large stone wheel near the steps leading up to the temple was my favorite sculpture amongst all! But 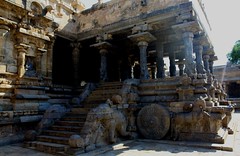 there were many other fabulous carvings as well. The mandapa housed 81 pillars with intricate sculptures of deities and dancers. Some of them had the image of Yali, a mythical creature which is said to have the trunk of an elephant, the face of a lion, the body of a bull, the ears of a pig and horns of a ram – this became another of our favorites. The pillars in the inner sanctum were devoid of any sculptures and that Mr. Durai explained was to ensure that devotees are not distracted when they stand before the Lord. The inner sanctum houses an image of Lord Shiva as Airavatesvar because it is said that Airavata, the white elephant of Lord Indra worshipped Lord Shiva here.

Some of the broken sculptures dug up by the ASI have been placed in a corner of the gallery that surrounds the temple complex. Metal grills guard this treasure trove. It was locked at first but Mr. Durai managed to have it opened for us and let us scrutinize the sculptures from up-close.

About 50m from this temple complex stands another temple dedicated to Periya Amman, Lord Airavatesvara’s consort. This one is much simpler in

terms of architecture but is just as awe-inspiring. Mr. Durai mentioned that the temple is ‘nothing great’ so our expectations were low when we entered its courtyard. Nonetheless, we were immediately impressed by the carved pillars that formed the front mandapa of the gorgeous temple. Here the carvings were definitely not as elaborate as the ones in Airavatesvara but they were simple and beautiful. There was nobody here except us so we walked around leisurely and tried to remember the explanation that Mr. Durai gave us for certain sculptures that were repeated here.

We were done with the Darasuram temples by around 10 AM. We had the entire day ahead of us to see Kumbakonam’s 3 short-listed temples. But instead of heading back there directly we decided to spend some time shopping for the brass and bronze idols that Kumbakonam is famous for. We visited the nearby village of Swamimalai which specializes in bronze works. The govt. run Poompuhar showroom there didn’t have anything spectacular so we left disappointed. However a small workshop-plus-store run by a family across the street had some fabulous bronze idols. They were expensive but of exquisite quality. We didn’t buy anything as we thought we may find better deals elsewhere. Unfortunately, we didn’t! Finally, in Kumbakonam we browsed through quite a few brass stores until we found one that sold genuinely old, family-held, brass stuff, as well as newly manufactured ones of decent 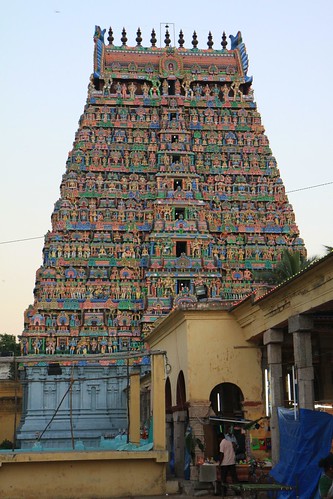 quality. From here we bought quite a few items, both small and big and paid, what we think, was a fairly reasonable price. However, when we walked out of the store we found that somebody had made away with my pretty pink Bata slippers (most stores in Kumbakonam request customers to leave their shoes outside the store before entering); not a very nice ending to our shopping spree!

In the evening we set out to see Kumbakonam’s temples. We hired an auto to take us to all 3 of them and to the Mahamaham tank as well. Of the temples, the 12th century creation of the Cholas, the Sarangapani temple was the best with lovely pillars and ancient sculptures. The Kumbeswarar temple had a 9-storey high Gopuram and a lively market within one of its corridors, which was quite unique. The Nageswarar temple was simple with a large courtyard before the main shrine. These temples, though important to the devout, didn’t excite us a whole lot! We ended the tour of Kumbakonam’s sacred sites by a visit to the Mahamaham tank where a Kumbha mela of sorts is held every 12 yrs. It is a large mass of water surrounded by ghats interspersed with shrines. It was nice to sit there for a while after sunset away from the chaos of the town.