I have relatives who live about 30kms north of Madurai in the district of Dindigul. As a child I remember visiting them during our summer vacations and having a wonderful time. So this time when we caught a Madurai-bound bus from Thiruchy, I had warm, fuzzy feelings for the place in my heart even before we stepped foot in it. Of course, once we got into the heart of the chaotic temple-town, struggling to find a decent place to stay, all those feelings quickly disappeared. Luckily, we didn’t stay long; just enough to visit my relatives, the lovely Meenakshi Temple and a day jaunt to Rameswaram!

After disappointing visits to the most renowned temples, we didn’t have many expectations from the Meenakshi Temple. We got to it around 7pm in the evening when it suddenly started to drizzle. Not wanting to walk around bare foot on wet grounds, we turned back and headed to Madurai’s Murugan Idly Shop for dinner; it was absolutely yummy! By the time we got done there, the rain subsided so we dashed back to the temple, which is open until 9PM every day.

Right from its main entrance gate, the Meenakshi Amman temple 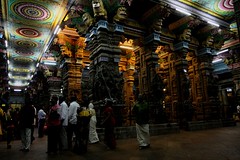 is quite impressive not only for its architecture but for the way it’s maintained. Even though the street outside the entrance had plenty of stores and restaurants, it looked like it was swept clean every day and a conscious effort was being made to keep it as litter-free as possible; we were impressed! There are 2 concentric, walled gateways to the main shrine. These have 12 colorful Gopurams while the 2 Vimanas above the shrines of the main deities are covered in gold. Although the original shrine is considered to be around 2000yrs old, the current temple complex was built by the Nayak dynasty in the 16th century. Here the main deities are Lord Shiva as Sundereswarar and his consort, Parvati as Meenakshi.

The interiors of the temple were quite well-maintained too andeven though there were the usual stalls selling Prasadam and Archana tickets, it was a lot more organized. But the highlight of the fabulous temple is the carvings on its 985 pillars – they are unbelievably good! The workmanship is of the highest quality and we think it’s probably the best work we’ve seen in any functioning temple till date! Luckily, cameras were allowed so Madhu was able to take pictures of some of the lovely sculptures. My favorite ones were of Lord Vishnu handing over his sister Meenakshi in marriage to Lord Shiva and a seated Meenakshi!

Since it was late in the evening, we were able to get an easy look at Meenakshi Amman’s image without being hurried or hassled. There were several other shrines as well and we paid them all a visit. We walked around the pillared halls until security personnel began herding all the visitors out at 9PM sharp. We went with the flow of people and ended up exiting from the temple’s northern Gopuram instead of the western one from which we had entered. And then, being completely disoriented, instead of turning left we walked right and all around the temple complex till we got back to the place where we had left our shoes; I guess the Goddess wanted us to do a parikrama before we left.

Rameswaram is about 172kms SE of Madurai and when something is that far we usually don’t attempt it as a day trip. However, when we researched Rameswaram we learnt that it’s not really an interesting place to

stay in, with very few hotel options. So we decided to visit it from Madurai. At first we planned on taking a state bus to there and back. But our hotel guys suggested a bus tour, which would pick us up from the hotel at 7am and drop us back right there in the evening. It sounded a lot more convenient, so we opted for it. However, in the end, it wasn’t all that convenient!

The bus, rather an 18-seater mini-bus, was supposed to pick us from the hotel at 7am but by the time the bus took off with all the scheduled passengers it was almost 8:30am. Right then we knew that we had made a mistake but then it was too late to do anything about it. The bus took 3 ½ hours to get us to Rameswaram and dropped everybody off at the village’s top attraction: the Ramanathaswamy Temple.

The temple is dedicated to Lord Shiva and is considered to be very sacred as it is one of the 12 Jyotirlingas in the country. In the epic Ramayana Lord Rama prays at this temple to wash away any sins that he may have committed during his war against Ravana. It is also part of the Char Dham pilgrimage undertaken by 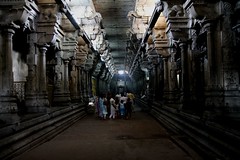 the devout. So, overall, it is one of the most prominent temples of South India. Unfortunately, we weren’t too impressed. The place was too crowded and chaotic! Taking a dip in the 22 tanks within the temple complex is considered to be a purifying process before entering the main shrine. However, this devout act had turned the temple complex into a slippery, slushy, messy area with dripping devotees rushing back and forth between the tanks and the main shrine. In fact, while we were there the temple management was making announcements over the loudspeakers placed throughout the complex requesting visitors to change into dry clothes before entering the main shrine; we didn’t really see that request being followed diligently. All this added to our foul mood and we didn’t enjoy the temple as much as we could have. It had some gorgeous pillars (which are more than a 1000) with lovely Yali capitals. Had the atmosphere been a little saner we would have definitely relaxed a lot more. In the end, we had a quick Darshan of the enshrined Shiva Lingam made of sand and left.

The mini-bus was to start the return journey to Madurai at 2pm. Since we had more than an hour left after the temple visit, we hired an auto-rickshaw to take us to the southeastern-most end of Rameswaram, to the little village of Dhanushkodi. Once we left the chaos of Rameswaram, the scenery changed to an idyllic seaside one with the Bay of Bengal to our left and the Indian Ocean to our right. There was no human habitation along the way and this we learnt later was due to the 1964 cyclone that killed nearly 1800 inhabitants of the area! Since then the area has been declared as unfit for living. Today only a few fisher-folk continue to live. It’s rather sad ‘coz the area is quite beautiful and could have given any seaside resort town a run for its money.

walked along the sea shore for a while. The white sand reflected harshly under the afternoon sun but it was a beautiful place. Many other visitors ventured into the cool water and played about. There were a couple of small stalls selling the mandatory seashells or refreshments. Our auto guy said that if we were willing to walk 4kms further south we could get to the very tip of the stretch and even get a peek at Sri Lanka. But we didn’t feel like walking in the heat so we let it pass. With nothing else to do, we returned; the auto guy brought us back to Rameswaram just in time for our bus’ departure.

Instead of heading straight back to Rameswaram, the bus stopped at another temple along the way. Madhu and I didn’t bother enquiring which

temple and didn’t get off the bus either – we were in no mood for another temple visit! And later it stopped at the spectacular Pamban bridge which connects the Pamban island (on which Rameswaram is situated) to mainland India. It is the second-longest sea link in the country after the Worli-Bandra one in Mumbai. The views out to the sea from here were gorgeous! We could also peek below at the railway bridge that runs parallel to the road bridge. A friend who had travelled by rail to Rameswaram remembers being frightened at seeing the sea stretch out on either side as the train hurtled towards the island; must be an interesting experience for sure!

The ride back to Madurai seemed longer because of the evening traffic. We were dropped back near the hotel by around 7pm. Overall, we didn’t enjoy the Rameswaram visit at all! I wonder if the experience would have been different (and our moods would have been better) if we had gone there on our own via a state bus or a private taxi! I guess, we’ll never know!