Located in Tamil Nadu, around 58 km from Chennai, 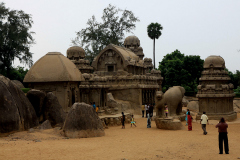 Mamallapuram is an ancient port city of the Pallava kings. It’s famous for the earliest Dravidian structural stone temples. In addition, every year, the area comes alive with a dance festival that hosts performances by the best artistes from various Indian classical dance forms. The four-week festival is organized by the Tamil Nadu Government and takes place between December and January every year.

Besides Bharatanatyam, a dance form that originated in 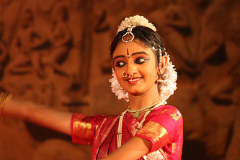 Tamil Nadu, other dances such as Kathak, Kathakali, Kuchipudi, Mohiniattam and Odissi can be seen at the festival. There are also performances of Tamil folk dances such as Kavadi, Karagam, Kokkali Attam, Silambattam and Thappattam, besides different forms of folk art from the other Indian states.

While the Indian classical dance fraternity descends on Mamallapuram during this period to see the captivating performances, the festival is also a major tourist attraction as people from all over the world visit the city during the 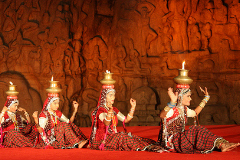 time to get a glimpse of ancient Hindu culture and traditions. Over the four-week period, at least two performances are staged every night, and entry is free.

The open-air performances usually take place at night. Until a couple of years back, the illuminated Arjuna’s Penance (an exquisitely carved bas-relief that is one of the UNSECO recognized World Heritage monuments in Mahabalipuram) was used as the backdrop, but in recent years, the venue has been shifted to the Shore Temple – a move that revives a centuries-old tradition, as in earlier times, temples maintained a complement of trained dancers, who performed during celebrations.

Like other Indian festivals, the Mamallapuram dance festival is vibrant. It showcases classical dance forms and music, which have been preserved over the centuries. In addition, the magical setting under the open sky with strains of classical music and the soothing sound of waves washing ashore sets the stage for a mesmerizing event that celebrates dance as an art.