Under the patronage of dynasties like that of the Cholas and Pallavas, several fabulous temples were built all over Central Tamil Nadu. The best amongst them are in the towns or villages of Chidambaram, Gangaikondacholapuram, Darasuram and Thanjavur. The first two fell on the way to Kumbakonam, so we hired a car from Puducherry and set off on a temple tour.

Having been a big fan of Bharatanatyam (one of South India’s most popular classical dances) all my life, 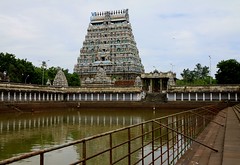 the Nataraja temple at Chidambaram, which is dedicated to Lord Nataraja, holds great importance in my heart. The Ananda Thandava pose in which Lord Shiva is depicted here, is one of the most popular image representing Bharatanatyam in the world today. Situated some 80kms southwest of Pondicherry, the village of Chidambaram revolves completely around this ancient temple complex, which is spread over 40acres. Its exact date of construction is not known but based on Tamil literature, it is guessed to be around the 5th century AD, making it around 1600yrs old!

When the taxi dropped us off at the head of the lane leading up to the temple’s east Gopuram (gateway), we were disappointed to see that the lane was crowded and lined on either side with stores, hotels and street-side stalls. It was littered and quite filthy; certainly not an auspicious entry to the sacred temple! However, inside things were better. The gopuram looked absolutely gorgeous with its 7 tiers of intricately carved details. It is said that Bharatanatyam’s 108 karanas (poses) are carved into this masterpiece.

The main shrine is a beautiful temple with gorgeous pillars everywhere. How I wish photography was allowed! We ambled around the place peeking into all the little shrines within. To our amazing luck, we got to the sanctum sanctorum just in time to catch one of their daily poojas. It was fabulous to catch a glimpse of Lord Nataraja with his consort Sivagami at his side. However, I wish we could have got a closer and longer look. Devotees were fervently offering their prayers while the priests were conducting Archanas and other rituals for them. So we couldn’t get very close. The roof of this ‘Chit Ambalam’ is said to have been laid with 21,600 golden tiles with the sacred word ‘Si Va Ya Na Ma’ inscribed on them.

Sadly, the temple is not as well-maintained as it ought to be. For me, this took away a little bit of the magic that I had in my heart for the image of Chidambaram.

Just about 16kms east from Chidambaram is the unique Pichavaram Mangrove Forest. The forest is spread over tiny islands in the backwaters that are separated from the Bay 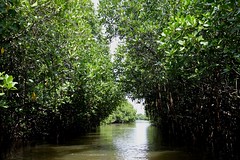 of Bengal by a sand bar. It is considered to be one of the world’s largest and healthiest mangrove forest, playing host to quite a few species of birds. Tamil Nadu Tourism dept has set up boating services using which visitors can glide thru the forest taking a closer look at the fabulous mangroves. We got there around noon and signed up for a 2hr row boat ride. Motorboat rides are also available but these cannot get thru some of the narrower sections of the forest. Moreover, they are not exactly eco-friendly¦

Our 2hr ride was absolutely wonderful! It was very peaceful to glide over the backwaters bringing us within touching distance of the mangroves. The nicest part was when we entered narrow channels of water with the mangroves on either side forming a shaded arch above us; it was quite magical! We spotted quite a few birds (probably Egrets) but couldn’t get close enough. Along the way we saw a Neer Naya (Water Dog) lurking around the edges of the water between the mangroves. It was a fawn-colored, mid-sized creature that looked back at us warily as it drank from the waters – it was an exciting sight! We also saw a dead water snake, which the boatman said probably died after being caught in the (illegal) fishing nets. There were several women immersed in the shallower parts of the water – around 4ft deep – fishing with small nets in hand. We loved the ride, overall, but wished we had gone there later in the afternoon when the sun wouldn’t have been as harsh.

After lunch, we headed off to the next temple on the route in the village of Gangaikondacholapuram, which is about 40kms south of Chidambaram. Since 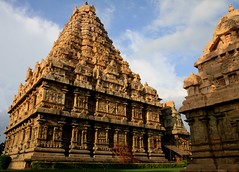 the name was too long to pronounce Madhu christened it GKC, which is proving to be useful while writing too. The city is said to have been built by the Chola king, Rajendra Chola I after his victorious battle against the Ganga dynasty; hence the name! The 11th century temple here is absolutely fabulous with sculptures that are said to be better in quality than the ones in Thanjavur. In fact, there are many comparisons ofthis temple to the one at Thanjavur as it’s a copy of the latter, which was built by Rajendra Chola’s father. The GKC one is said to be the feminine counterpart of 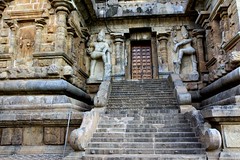 Thanjavur because of the slight curve of the former’s Vimana; the Thanjavur one has a straight-lined pyramid. These two temples and another one at Darasuram (near Kumbakonam) have been marked as the Great Living Chola Temples under the UNESCO World Heritage Sites list.

A large Nandi sits outside the entrance of the main shrine,facing the inner sanctum, which houses a 4m high Shiva Lingam. Since the temple was closed for the afternoon when we got there, we spent almost 45minutes walking around the complex, admiring the fabulous sculptures on the temple’s outer walls. My favorite was that of a seated Parvati sculpted near the temple’s northern entrance. This entrance has been salvaged quite nicely while the main one at the eastern side is in complete ruins. In fact, renovation on 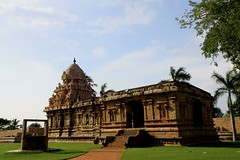 it seems to be in progress right now. There are smaller shrines around the main one as well. All of these are grouped into a walled compound with grassy lawns that have been meticulously maintained. At sharp 4pm, the temple doors opened and we were able to walk through the pillared interior, which was just gorgeous! Since it was Dassera time, an idol of Goddess Durga was placed in the hallway before the inner sanctum. I bought ghee lamps from a lady near the entrance of the temple and lit them before the Devi. She was beautifully adorned!

After walking around the temple complex to our heart’s content, we finally started out for Kumbakonam around 4:30pm. It had been a lovely day of temple-hopping and boat-rides!

6 Responses to Temple hopping to Kumbakonam