Located almost at the heart of central Tamil Nadu, tiruchirappalli is one of the state’s largest cities. It is also called Thiruchy or Trichy (anglicized) as a savior from the original tongue-twister! As our taxi neared its outskirts on the highway, we could immediately make out the city’s most important attraction, the Rock Fort, as it sat atop a rocky hillock overlooking a flat settlement. After being in smaller towns over the past few days, it was nice to see a (relatively) big city again!

All, or at least the most important, of Thiruchy’s attractions can easily be covered in a single day and

that’s exactly what we did. We caught a bus (route #1) from right outside the hotel, which was close to the city’s railway station, for the top agenda of the day: visit the Sri Ranganathaswamy Temple situated in the suburb of Srirangam, some 6kms away. It was a nice (and cheap!), 20-minute ride along with locals on their way to schools and offices. We passed the Rock Fort area along the way and realized we could take the same bus to visit it later in the evening.

What the Natarajar Temple of Chidambaram means to the Shaivites 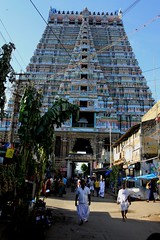 (Lord Shiva devotees), the Sri Ranganathaswamy Temple means the same to the Vaishnavites (Lord Vishnu devotees)! This ancient temple, spread over 156 acres, is considered to be the largest functioning religious center in the world! It is enclosed within 7 concentric walls, each with a gateway of its own. This sounded fantastic and we couldn’t wait to see it. However, today, each of the temple’s gateways is filled with a bunch of stores, tea-stalls and flower vendors; we could hardly pay any attention to the various Gopurams we passed. It was chaotic, confusing and hardly felt like we’d entered a sacred space. Selfishly, I wished that the temple had not been a functioning one, which would have made it less popular and better preserved. Oh well!

Inside, the temple complex was equally chaotic and unorganized. There were ticket counters – for sale of Prasadams and tickets for a terrace view of the complex – and stuff like abandoned ropes, urns lying amidst the gorgeous temple pillars. We did our best to concentrate on the nicer parts but it was tough! The pillars were just absolutely gorgeous; especially the ones that faced an inner courtyard. They had fabulous figurines of a man atop a bucking horse beneath which were other beautifully detailed creatures; it was simply gorgeous!

Across the courtyard from these pillars was the famed 1000-pillar hall, which is rumored to have fabulously carved pillars; this was what we were most looking forward to! However, to our utter dismay, we found the hall enclosed in a metal grill, which was locked up for good measure! There was no one around to help us so we helplessly peered through the grill for a closer look. Sadly, the hall looked like it was being used as a storage space as well with quite a few things strewn around. As we turned around to leave, we actually saw a man peeing in a corner of the courtyard – it was so disgusting! A priest passing by reprimanded him sternly but we were just shocked that someone could even think of doing this inside a temple complex!

Later we joined a queue to have a quick look at the reclining form of Lord Vishnu, which is enshrined within the inner sanctum. However, we were told that the doors to the inner sanctum would open only at 9:15, a good hour away. We were in no mood to wait that long, so we left. On our way out, we bought tickets to climb to the terrace of the front Mandapa from where we could get a lovely view of the different Gopurams that encircled the temple.

Disappointed with the morning’s temple visit, we stayed indoors for 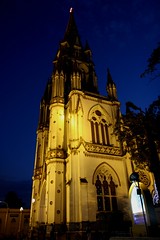 the rest of the afternoon and reluctantly stepped out in the evening to visit Thiruchy’s Rock Fort. We took the same bus and it dropped us across the street from the fort’s entrance. Here stood a gorgeous church called Our Lady of Lourdes Church. It is a very elegant structure with soaring spires in cream and brown hues. We stepped into its courtyard and Madhu had a great time taking some gorgeous pictures in the evening light. The interiors were gorgeous with fabulous woodworks and stained-glass windows but it was strangely devoid of any pews. So everybody was seated on the floor or on the low platform that ran along the sides of the hall. Overall, though, it was a very impressive church and it lifted our moods immediately!

Hardly anything remains of the fort that was built around Thiruchy’s 83m high rocky outcrop. However, the main entrance gate still stands and it is thru this that we entered the market, which now surrounds the hillock completely. Since it was a festive season, the market was chock-a-bloc with people, stores, street-side stalls and auto-rickshaws vying for space. It was fun to walk thru there watching the bustling market scene. A narrow lane with flower vendors and handicraft vendors on either side, led us to the base of the hillock.

This rocky hillock has been identified to be at least 3 billion years old making it older than the Himalayas. There are shrines built all around it

starting with a Ganesha one at the base. Here we bought entry tickets to climb the hillock and then started the 344-step climb to the temple at the very top. Along the way there were several shrines including a fantastic, ancient temple dedicated to Lord Shiva. Here the Lingam enshrined within the inner sanctum is said to be a projection of the rocky hillock itself. The temple was very atmospheric and looked absolutely untouched from the time it must have been first built – we loved exploring it! Climbing some more steps we finally reached the top where people (especially youngsters) sat around gazing at the lit-up city at their feet. But this was not the very top of the hill. From here, steps roughly cut into the hillside climbed further up to the Vinayaka temple that sat grandly above the entire city. It wasn’t an architecturally special temple but the views from it were absolutely gorgeous! We could make out the beautifully lit Lourdes Church and the Gopurams of the distant Sri Ranganathaswamy temple silhouetted against the night sky.

Since we had visited the Rock Fort later in the day when it wasn’t as crowded as it could get, our visit was absolutely beautiful and almost magical! We had zero expectations from the place, but it completely enchanted us and ended our Thiruchy visit beautifully!