Death is something to which different cultures have vastly different relationships. Gone are the days of wakes in the front parlor, and many funerals or memorial services now feature a nice framed portrait, 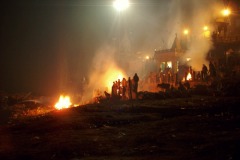 rather than a body in a casket. While we may spend our time at horror movies, or reading about murders in the press, the reality of death seldom confronts us. It is only when we lose someone with whom we are very intimate that we come face to face with one of life’s inevitable transitions. And our lack of experience contemplating this passage means that accepting the end of a life is perhaps even more painful for our lack of preparedness.

There are many amazing aspects to the burning ghats of Varanasi—the two most important are called Manikarnika and Harishchandra—but an opportunity to experience the cycle of life in a direct way and contemplate its significance is perhaps one of the most unique.

The ghats in Varanasi are the huge flights of steps 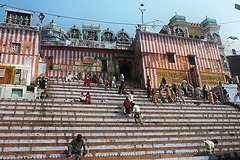 leading from the edge of the city into the sacred Ganges River. The city’s residents use them for mundane purposes like washing clothes, but Hindu pilgrims come there to make offerings and to ritually bathe, and the burning ghats are considered to be one of the most holy of places for transitioning to the next life. Many hold the belief that cremation at the Ganges ensures liberation from the suffering of rebirth.

Perhaps the best way to experience the burning ghats is from the Ganges itself. Small wooden boats wait at the bottom of the steps before dawn. Piloted by oarsman 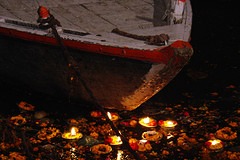 they are there to ferry both pilgrims and tourists out onto the ancient river. In the darkness, dozens of floating votives—little plates of lit candles and fresh flowers—glow on the water. Released on the river by pilgrims in the boats, they pay homage to the mighty Ganges and to Shiva, the god who oversees all transformation, including from life to death and back again.

There is something about this ancient tradition that makes one speak in hushed voices out of respect, the swish of the oars dipping in the water, the most prominent sound. As the sun starts to come up, the pastel colors of the old stucco and brick buildings along the shore began to emerge. One is likely to hear the sound of chanting and cymbals in the distance, see small groups performing rooftop yoga, or pilgrims wading into the water to cleanse themselves.

From the boat, you will slowly approach the burning ghats, where it is said the cremation fires have been 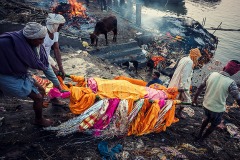 burning continuously for thousands of years. And it is likely one will see a saffron shrouded body being carried down the steps. Wreathed with garlands of fresh flowers, the deceased are placed on large wooden pyres made of crisscrossed firewood. Prayers are recited, and usually it is the oldest son or the younger brother who sets fire to the funeral pyre. Each pyre will burn for several hours while attended by the Doms, whose job it is to oversee this task. Ash swirls in the breeze, and eventually the last bits float towards the Bay of Bengal, carried by the sacred waters.

Public, outdoor cremation perhaps seems primitive to some, but the elemental nature of it—fire consuming the remains of this life and releasing the deceased into nirvana—definitely has impact. One experiences first hand the inevitability of life’s cycles, but the solemn beauty and hope contained in this ritual, makes death seem somehow more natural, less frightening, and indeed part of life.