Monday night we booked our Tuesday’s journey from Delhi to Agra. The train was Ernakulam 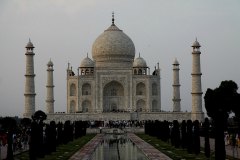 Millenium Express, which starts from the Nizammuddin station in Delhi at 5:55am and gets to Agra Cantonment by 9:35am. We woke up early, called for a Meru cab at 4:15am, which got us to the station by 5:15am.

Nizammuddin station is a busy and chaotic one even at 5am in the morning. There was a metal-detector that one has to pass thru to get to the platforms but the security guards next to it hardly even looked up to see who passed by. The train was already waiting for us when we got to the platform. Our compartment was almost at the other end of the train so Madhu and I had to hurry a bit. But we boarded it well before time and found our seats easily as well. The train pulled away from the station exactly at 5:55am. So far everything had gone well… everything, except for my health .

Since Monday I’d not been feeling too well; in fact, I barely slept well that night and when I woke up Tuesday morning my body ached like never before. I was super-worried that I was coming down with a fever 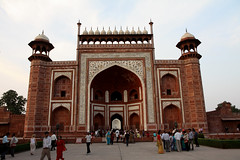 or flu. But it didn’t feel bad enough to cancel the Agra trip, so I tried not to complain too much. By the time we boarded the train, though, my body felt like it had been beaten up completely. I could barely sit up straight. It was a painful 3 and a half hour journey to Agra. Thankfully, at Agra Cantonment station, as soon as we alighted, we got a prepaid taxi for Rs.50 to one of the hotels that Madhu had previously looked up online. It was called Tourist Resthouse and it was just about 4 to 5kms from the station. I knew I had to hold on just for a few more minutes until I find a proper bed to stretch out in…

After we checked in, we bought some pain-killers from a nearby medical store. I ate a little bit of breakfast, popped in a pill and fell asleep around noon. The pain-killer worked beautifully – I slept for nearly 4 hours and woke up refreshed. I’m not a big fan of pills but in this one instance, Thank God for CombiFlam!

Madhu and I’ve been to the Taj before but we had visited it mid-day on a weekend when it was terribly hot and crowded. So this time around, we wanted to visit it in the evening and early morning when the weather would be more forgiving and not as crowded. So after some tea and snacks at the hotel’s restaurant, we took an auto-rickshaw to the Taj. Now, taking an auto in Agra is very different from hopping into one in Bombay. In Bombay, you just flag the auto down, tell them where you want to go and if they are willing to go there, you hop on and when you get to your destination, you pay exactly according to what the meter shows. In Agra, you don’t need to flag an auto down as they find you first. They are almost always willing to take you anywhere you want to go. But then there’s no meter . So you have to bargain the fare before-hand. Now, for people like us who have no idea how far our destination is or how much it should cost, this is a big challenge. So before leaving for anywhere, Madhu always asks the hotel guys for an estimate on how much it should cost and then we feel armed. Most often the auto-drivers quote twice what we are willing to pay and then it’s a bargaining game until both parties agree – it’s almost fun .

Coming back to the Taj – we got to the main entrance just past 4:40pm. As soon as we got down, we were surrounded by people either asking to be hired as guides or selling stuff. Amidst this chaos 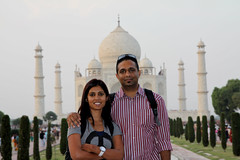 we also heard that the ticket counter would close for the day at 4:50pm, which meant that we had less than 10 minutes to buy tickets. There’s a 1km walk from the vehicle drop-off point to the ticket counter – we didn’t want to risk walking so we hired a cycle-rickshaw of which there were plenty waiting. As soon as we got to the ticket counter, one more guide approached us. This guide, though, spoke well and since we were anyway planning on getting a guide, we hired him quickly for Rs.200. His name was Mehtab Taj. He immediately helped us buy the tickets and we rushed in – we barely made it, ‘coz we were amongst the last few people to enter the Taj complex. It would remain open until 5:50pm so we had exactly 1 hour to see it.

And what a sight it was! The place was a little more crowded than we had anticipated for a weekday evening but magnificient, nonetheless. Mehtab gave us a lot of good information regarding the monument and also pointed to certain spots from where we could get excellent shots of it. The symmetry of the monument and the beauty of it’s inlay work were just breathtaking. 1 hour went by quickly and at 5:50pm promptly we were all herded out of the complex. Madhu and I vowed to come back the next morning to linger around some more….

We woke up early on Wed morning and got to the Taj around 6:45am. 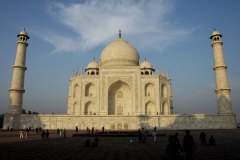 I had taken another pain-killer the previous night so I had slept well and I felt confident of surviving the day without too much pain. At 7 in the morning too there was a bus-load of visitors but it wasn’t as crowded as the previous evening. In either case, nothing could have dampened the beauty of the place at that time of the day – it was just gorgeous. Madhu and I spent almost 2 hours just walking around, sitting and gazing at the beautiful monument. We realized that our decision to visit it late in the evening and early in the morning was perfect – we were able to enjoy the place at its best.

After breakfast and some rest at the hotel, we headed towards the next important sight in Agra – the Agra Fort. 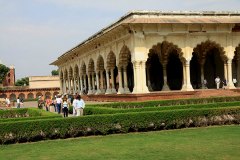 It is NW of Taj and closer to our hotel so we took a cycle-rickshaw, which is touted in the guide books as a greener option . The fort is humongous and we knew we would need a guide to take us around. So we hired one at the gate (they all have govt authorized ID cards) for Rs.150 and he started showing us around. It’s a beautifully maintained place and we enjoyed it completely. The highlights were the Jehangiri Palace, Diwani-i-Aam and the beautiful sand-stone carvings. Apparently, the sets of the Jodha-Akbar movie were inspired from here. After the guide walked us through the fort, we retraced our steps and walked through the whole place again – this time we walked leisurely and enjoyed every bit of it even more. Agra fort is definitely a must-visit for all Agra visitors.

Our next stop was Itimad-Ud-Daulah, which is the tomb of Noor-Jehan’s father Mirza Beg. It is situated on 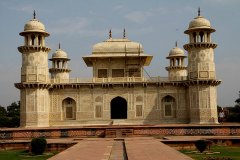 the eastern side of the Yamuna and to get across, it was a long ride around town and over the Delhi-Agra highway that acts as a bridge over the Yamuna. Itimad-Ud-Daulah is in the older part of Agra and is almost in the middle of a village. There were hardly any visitors there compared to those at the Taj or the Fort. The tomb is at the center of a nice courtyard crisscrossed with small water-canals and pathways. It is a small structure but is exquisitely designed and decorated with mosaic and in-lay work. Since it was the first structure to be completely built of marble, it is also called as ‘Baby Taj’ . It was very peaceful to stay awhile and linger without the chaos of a crowd. Since it was only 2pm and we had the rest of the afternoon ahead of us, we decided to check out Sikandra as well.

Sikandra is in the outskirts of Agra; about 11km from where we were so it was difficult 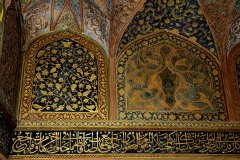 getting an auto to take us there. When we finally managed to get one, the auto driver wasn’t pleased with having just 2 passengers for such a long haul. So along the way, he took in a couple more passengers, who sat on either sides of him . They got off somewhere on the way to Sikandra and then he managed to get 2 more who rode with us all the way to Sikandra – it was all very amusing!

At Sikandra is Akbar’s tomb, which was completed in 1611, so it pre-dates the Taj by a few years. To say that this monument is fantastic would be an understatement. Again, since it’s not as popular as the other sights in Agra, it didn’t have as many visitors. We hired another guide, Mr P. C. Sharma to show us around a bit and that was totally worth it. He showed us around the beautiful complex, which is set in over 100 acres of land and sits at the center of a huge green space. Keeping in mind Akbar’s tolerant sentiments, the monument is a mix of both Islamic as well as Hindu art. Instead of the Muslim dome, it has the Hindu chhatris or pillared domes with Christian crosses below them. The most striking feature of this complex are the herds of deer and antlers that graze in the green lawns – there were quite a few them too – it was unbelievable! Apparently, the British had introduced a few of them into the area and kept them within the walls of the complex. Since then, they have grown in numbers in the care of the Archaeological Society of India.

Since breakfast, we hadn’t eaten all day, so we were really hungry by 5:30pm. We took an auto back to Sadar Bazaar, which is one of the popular shopping areas of Agra. We figured that there ought to be some good restaurants there but to our dismay there was hardly anything. We eventually ate at Brijwasi, which served decent food but I was just bummed with the lack of choice. Even in the guidebooks, there were just a couple of restaurants recommended, of which Brijwasi was one. I don’t think Agra has a big restaurant culture and that’s really sad for a town that makes most of it’s money through tourism. Now I know why so many of our fellow travellers ate regularly at the hotel restaurant itself!

That night I didn’t need pain-killers to fall asleep – the day had tired me out; I was out cold by 9pm …

One Response to Agra, the city of the Taj Mahal