As a child I have watched numerous Hindi films of the 80s where the hero and heroine sang and danced between beautiful sand-stone columns and palaces. Somebody told me then that one of the places where these movies are shot is called Fatehpur Sikri and since then I’ve always wanted to visit it. It’s only during 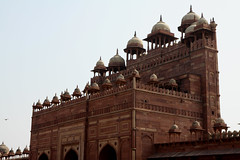 the preparation of our travel that I found out about Fatehpur Sikri being a UNESCO World Heritage site and that it’s just about 60km away from Agra. So we reserved day 3 in Agra for this excursion…

We had planned on hiring a taxi for the day but our ever-helpful hotel owners discouraged us from doing so. They said that the taxi drivers would only wait for an hour or so, which meant that we would have to hurry and finish seeing the whole place in that time. They suggested that we take the local bus, instead, which runs every half hour to Fatehpur Sikri and back. We took their advice and around 10:30 in the morning (woke up late), took an auto to the Idgah Bus Station. Just as we were nearing the bus station our driver asked us where we were headed. When we told him Fatehpur Sikri, he immediately stuck his head out of the auto and yelled at the driver of a bus that was going in the opposite direction. Apparently that bus was going to Fatehpur Sikri. On hearing the auto driver, the bus driver slowed down and pulled over a bit for us – love this country! There were only 2 seats vacant in the whole bus and they were on the bench at the back. I braced myself for a bumpy, crazy ride but it wasn’t all that bad. Along with local travellers, there were quite a few tourists like us on the bus too. The ride cost just Rs.24 per ticket.

Fatehpur Sikri is a fortified, walled city built by Akbar in the village of Sikri. When the bus pulled into the Sikri bus station, it was already noon. Sikri village is like any rural Indian village except that it’s busier and filthier. From the bus station, the only way, on foot, to the 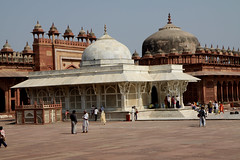 Jami Masjid and the palace ruins of the walled city is through the Sikri bazaar and up a flight of stone steps. Lonely Planet has described the bazaar as very colorful and worth a stroll – I beg to differ. It’s definitely colorful but absolutely not worth the stroll. The place is filthy with open gutter waters running everywhere and more flies than I have ever seen. The guide books had said that Sikri is famous for its Khataie biscuits, which I have always loved. I was looking forward to sampling some of the local stuff but the sight of the bazaar completely put us off – there was no way we could eat there. We squeezed our way through the narrow, crowded lane and climbed up to the Jami Masjid complex quickly. 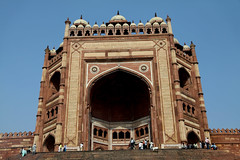 takes your breath away … literally, too, as it’s quite a climb. We had to climb yet another flight of steep red-stone steps to get to the entrance. Here we were asked to remove our shoes. The Jami Masjid complex contains a huge, beautiful square with stone pillared pavilions enclosing it on all 4 sides. To the left of the main gateway is the Jami Masjid where prayers are read even today. At the back of the square, across from the Buland Darwaza are the tombs of Sheikh Salim Chisthi and his grandson, Islam Sheikh. Because of the searing afternoon heat, we decided to walk through the shaded pavilions and make our way around the square. However, we were hounded by local guides at every step. In fact one of them was extremely persistent and wouldn’t let us be. He literally begged to be hired and in the end we caved in – more out of pity than anything else. He, however, didn’t know much and simply showed us the obvious stuff. But we didn’t mind too much as by hiring someone, we were left alone by rest of the touts there.

Saint Sheikh Salim Chisthi gained fame after Akbar prayed to him for the birth of a son and the wish was granted. Since then scores of believers have been visiting his tomb to get

their prayers answered. The ritual is to pray for your wish to be granted and tie a thread to the lattice-work behind the saint’s tomb. I was totally looking forward to doing this and wanted to buy the thread from one of the vendors within the complex. But our guide took us to a particular vendor behind the tomb who was hell-bent on making us buy a ‘chadar’ as well – I would have but he quoted a ridiculously high price for it. Moreover, he pissed me off by saying that I couldn’t buy the thread without buying a chadar to go with it. I knew this was not true, so I decided not to buy anything. Just as we got up to leave, as a show of his generosity, he gave me a small bag of flower petals to place on the tomb, for free. I had half a mind not to accept it, but I didn’t want to create a scene, so I quietly took it and walked away. It hurts to see people make a business out of these things … but that’s the way it goes, I guess!

Salim Chisthi’s tomb is beautiful. It is completely made out of white marble with a 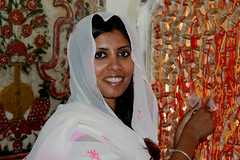 black ebony, carved door. We could enter the tomb chamber with our heads covered. Pictures were allowed too. There were 2 maulvis who were ensuring that the crowd moved along smoothly and didn’t crowd the place. I was allowed to shower the flower petals over the tomb after which one of the maulvis asked me where my thread was. When I told him that I didn’t bring one, he removed a small ball of thread and cut away a small piece for me. I was so thrilled … I happily said my prayer and tied the thread to the lattice-work … it felt wonderful! Outside we sat a while listening to a qawwaal and then proceeded on to the next tomb. Islam Sheikh’s tomb is not as well-known and didn’t seem to have as many visitors. We took a quick look around and moved on.

The whole complex is absolutely beautiful but just not well-maintained. Forget maintenance, it’s not even cleaned on a regular basis. There’s pigeon poop and trash everywhere. It’s really sad that such a beautiful, religious place is not being cared for… 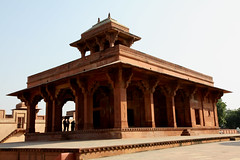 3 queens – Jodh Bai, Mariam and Rumi Sultan. Its a short walk, north-east of the mosque and has a ticketed entry-way. It’s this complex that’s been honored as a UNESCO World Heritage site – it’s spotlessly clean. And here’s where the movies were filmed. We tried using the Lonely Planet as a guide to the structures within the complex, but nothing made sense. So we eventually hired a guide to show us around. The place is huge and gorgeous. Each of the queens had their own palaces but Jodh Bai, who was presumably the favorite, had the largest one. Her palace had a summer wing and a winter wing, as well as a small temple where she could pray regularly. The other highlight was the Diwan-i-Khas, which had intricate wooden carvings in the center. Madhu and I took tons of pictures here.

By the time we left the ruins it was about 4:30pm. The last bus from Sikri to Agra was at 5:30 so we knew we had plenty of time. When we got to the bus station (again, going past the filthy bazaar), the canteen-wala said that the next bus to Agra should be arriving any minute. That minute, however, stretched out to nearly an hour as the bus showed up only around 5:35pm. It dropped us off at the Idgah Bus Station around 7pm. We decided to eat dinner at Sadar Bazaar before heading back to the hotel. LP had recommended a restaurant called ‘Zorba – The Buddha’ in the Sadar Bazaar area.

This is our last night at Agra. We thoroughly enjoyed our 3-night stay here. Overall, the sights and history embedded in this city are absolutely worth the visit. By travelling through autos, cycle-rickshaws and local buses, we got our first feel of rural life in India – we realized that while the urban cities have done well for themselves, the rural towns and villages are still leading the same life they had lead years ago. India will have truly developed only when development touches these small towns.