Vrindavan is where Lord Krishna is said to have spent his childhood. It’s just about 11km east of Mathura so today morning we hired an auto-rickshaw for a visit. For Rs.250 the auto-driver agreed to drive us to Vrindavan, take us to all the famous temples there, wait and then bring us back to the hotel; it sounded like a good deal. LP had listed a few temples with a brief description of each. Buoyed by the previous evening’s great visit to the Janmabhoomi, we assumed that they would all be worth visiting so we sat back looking forward to a great temple-hopping experience…

I guess we were setting ourselves up for disappointment. Nobody had really recommended Vrindavan as a must-see place but the guide books had spoken grandly of its temples. Moreover, movies filmed in or about Vrindavan have showcased it to be a very religious, atmospheric town. But we should have known better. The town is like a big, religious trap. Almost everybody out there looked like they were out to make money from the desperate believer.

Our auto guy stopped at 2 temples en route to Vrindavan. Both were listed in LP and both had nothing to offer. One, the Bhagvad Gita temple, was well-built and clean, with beautiful murthies, but had no charm. The other, called Pagal Baba temple, was huge and just plain commercial. Within its compound was a huge tank with filthy water and around the complex was a rest house where devotees could stay and eat. The temple was stark and seemed to keep a lot of room to hold marriages and/or poojas. We didn’t stay long – just took a look and moved on.

The next stop was at the heart of Vrindavan where the 2 main temples of the city are situated – Rangji temple and Govind Deo temple. Here, as soon as we alighted from the auto, a few guys surrounded us and offered to show us around the temple area. At first we resisted but later relented because the place looked a little confusing and we figured we could use some guidance. So we hired one of them for Rs.51 – one rupee extra as he was a brahmin and this money was donation to him. He turned out to be someone with way too many stories to tell about Vrindavan and Lord Krishna. He kept making us fold our hands and say ‘Jai’ to his ‘Bolo Shri Krishna Bhagwan ki’. At first it was very amusing … towards the end, it became tiring.

The brahmin first took us to the Rangji temple, which had a beautiful entryway. The temple itself was interesting but not special. From here he took us thru some narrow, stinky alleys and then stopped abruptly at the steps of an ashram. We could peek inside and see that this ashram houses widows about which much has been written and filmed. He told us that there are many such ashrams in Vrindavan where widows live and pray till their end – a very sad and depressing sight. Then he took us to a temple, which is famous for its idol; the idol is said to have appeared on its own to a devotee. There we were made to sit in front of the idol and the pandit gave us a lot of gyan on the importance of the place. And then he asked if we had a son. When we said no, he smiled as though finally finding the reason for our visit and said that if we pray well we will definitely be blessed with a son next year. This gender fixation bothered me immediately and I started to get annoyed. Then to add to it, the pandit said that we should definitely make a donation to the seva of Lord Krishna. I wanted to get this over with and leave, so I started to tell Madhu to remove a Rs.50 note, and that’s when the pandit said ‘Yahan log Rs.1200 ya Rs.1500 ka chadava karthe hain’. My mouth fell open and I was absolutely annoyed. So I firmly said no and said that we would just like to offer Rs.100. At this the pandit actually said ‘Nahi, ithna kam nahi ho saktha’. I was appalled. How dare they dictate how much we offer at a temple! Madhu and I stood up, placed the note in the offering plate, turned around and left. It was such a sham! After this we asked our brahmin guide to just take us back – we had enough of this (un)holy experience. He could sense our annoyance too as he walked meekly ahead and didn’t say much.

I didn’t want to leave without seeing the other temple, Govind Deo Temple but we didn’t want the guide to take us there. So we paid him his due and let him go. We then walked to the temple, which was built of red sandstone and was quite gorgeous! But as we neared it we found that it was infested with monkeys. It was a little unnerving to walk in with a bunch of monkeys sitting overhead watching you intently. Apparently, they are quite good at stealing purses and sunglasses from hapless devotees. The inside of the temple was gorgeous but we didn’t stay long. The place wasn’t clean because of the trash the monkeys threw about; we took a quick look around and then left.

Outside we asked the waiting auto-driver to take us back. He looked a little confused wondering why we wouldn’t want to stay and see the other temples. We got back to the hotel, had a nice lunch and then relaxed the afternoon away.

In the evening, we headed out to Mathura’s famed Vishram Ghat, the place where 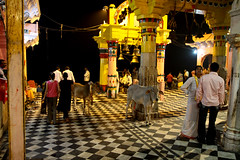 Lord Krishna is said to have rested after having killed his evil uncle, Kans. A long, narrow lane filled with colorful stores on either side led to the ghat – it seemed like a nice bazaar. The ghat itself is quite quaint and has a charm of itself. When we reached, it was just beginning to get dark. As expected, a brahmin pandit took a hold of us and got us to do a pooja of the Yamuna river. We decided to get it over with so that we don’t get pestered anymore. The brahmin did a pretty nice pooja for us and showed us around the ghat as well. He took us to the main temple where again the pandit prayed for us to have a son soon … so annoying!! The main Aarti was to start at 7pm; we decided to hang around till then. There was 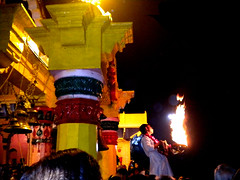 no place to sit so we just stood around in a corner. There were many boats that were taking passengers for a ride around the ghat but they just didn’t look safe. Some of them would take passengers out when the aarti started so that they have a better view of the proceedings from the water. At sharp 7pm, bells started clanging and the aarti started. It lasted for exactly 15 minutes; it looked and sounded great. I guess, this was like a trailer of what would be in store for us at Varanasi – quite an interesting experience – I’m glad we went.

We are now back at the hotel – will eat downstairs at the restaurant and try to sleep early as our train to Delhi tomorrow is at 9am . We’ve been out of the house for only about 5 days now but it feels like we’ve seen and experienced sooo much – it has been a very nice trip!

3 Responses to Temple-hopping in Vrindavan