The Ganges River, with its origins in the Himalayans, descends through a narrow valley, emerging at Rishikesh as the world’s most revered river. From there, the river swells into maturity as it pushes eastward towards the Bay of Bengal, snaking through the Gangetic plains. But before it can spill into the sea, it must bless the banks of the world’s oldest city. 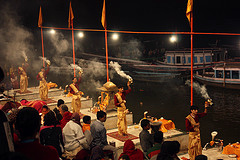 Varanasi. Benares. Kashi. It is the city of temples, of learning, of light. Founded not by man but by the god Shiva, the origins of this ancient city—like the Ganges that runs through it— are lost in a misty place not traversed by mortals. It is the place that provides moksha, the ultimate liberation of the soul from all its suffering. To die in Varanasi is to truly find eternal peace.

Over the centuries, the city has grown, flowered, 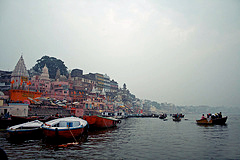 declined, and been reborn again. Its history echoing the cycle of birth, life and death called samsara from which it promises to free the pilgrim. Holy to both Hindus and Jains, it was razed by a Muslim Sultan in the 12th century, and restored by another Muslim, the Mughal emperor, Akbar four hundred years later. Another century passed and the 6th Mughal emperor, Aurangzeb, destroyed the city’s Hindu temples again. Under British rule in the 18th century, Hinduism flourished once more, and the Maharaja of Kashi built the Ramanagar Fort on the eastern bank of the holy river. Now the fort houses a museum as well as the current Maharaja, a high and holy priest held by many to be the direct descendent of the city’s founder, the god of transformation, Shiva.

The city itself is not huge by Indian standards, with about a million and a half people, but between October and March it swells with both domestic and foreign tourists, most coming for religious reasons. Western tourists are still a minority, however, and Varanasi is a perfect destination for an independent minded traveler. The narrow lanes of the old city invite one to deliberately lose one’s way. It is a place that fills up every sense: the touch of fine Benares silk, the shine of artfully worked copper and brass, the competing scents of the spice and flower stalls, the delicious sweetness of a langda mango.

Internationally branded hotels are still few and far between in Varanasi, but with some proper investigation you can 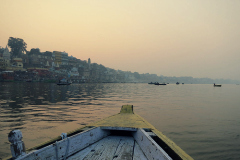 find delightful, locally owned hotels with excellent standards, modest guesthouses for the budget minded, or a spotlessly clean dharamshala catering to the religious pilgrim and providing pure vegetarian meals. Most people want to stay with a view of the Ganges and its ghats—the steps leading down to the river’s edge. With almost 100 ghats along the banks, it’s more than possible to find accommodations with a window onto the holiest of waters—and all the joy and sorrow of life that swells, ebbs, and dies there.