There are tons of stay options in Kolkata of varying budgets. We chose the Chowringee area ‘coz most of the city attractions seemed accessible from there. A fun place to stay in this area would be the hotels along Park Street as many restaurants and night-clubs would be easily accessible. However this also means that the street is crowded with relatively more expensive hotels. The backpacker areas along Sudder Street and Mirza Ghalib Road, which are close to Park Street, have quite a few budget places but the streets are overcrowded and quite filthy. So we found a place a little further south in a more residential area, which made for a peaceful stay at a more reasonable rate. 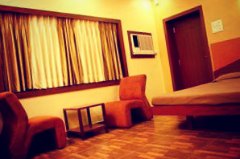 Ray Street is a narrow alley off Elgin Road at the southern end of the Chowringhee area. The alley has a school and several housing buildings making it a very busy thoroughfare. The hotel entrance cannot be seen from the street as it is tucked inside but a large, vertical, red sign on the building’s facade makes it easy to spot. The lobby, which is a flight of stairs above the street, is not very impressive but the rooms thankfully are!

Though small, Hotel Trimoorthi’s rooms are air-conditioned and nicely appointed (recently renovated) with everything we needed for a comfortable stay. The bathroom, especially, was quite nice with modern facilities and a large hot-water geyser. The hotel doesn’t have a restaurant but they have room service and food can be ordered in. The hotel staff is extremely friendly and accommodating (except for one chap who kept asking for a tip ) and they made the stay more comfortable! 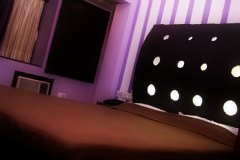 Since the hotel is in a residential area, grocery and medical stores were easy accessible! Elgin Road, which is a minute’s walk away, has a fabulous stretch of street-food, which we dug into almost every single day of our stay. It also has a great mall (Forum), an INOX theatre and a Crosswords bookstore, all of which came handy when we needed to while away time before the night train to our next destination.

Most of the city attractions were nearby and taxi rides to them were never expensive; the most we paid was Rs.75 for a ride from Barabazaar (north Kolkata) to Elgin Road.