Considered to be the world’s largest forest of saline-water mangroves, the Sunderbans National Park is also a Tiger Reserve, a UNESCO World Heritage Site and a Biosphere Reserve because of its unique ecology. It has been on our must-visit list ever since we started out on this trip. So when we booked our 2-night stay at West Bengal Tourism’s Sajnekhali Tourist Lodge, which lies within the Sunderbans National Park boundaries, we were super excited and raring to go.

However, getting to the national park wasn’t all that easy. In Kolkata, we took a cab to the State Transport Bus stand at Babu Ghat and then caught an 8am bus to a village called Sarberia, which was about 2 ½ hrs away. From there it was a 2hr, excruciatingly bumpy, auto ride (Rs.300) to the village of Godkhali. 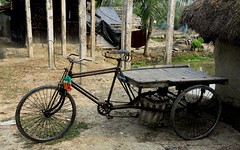 Then a Re.1 boat ride took us across the waters to the island village of Gosaba, which was surprisingly quite populated and large. Here we got on to an interesting, half hour, cycle-rickshaw ride (Rs.50): instead of a traditional, 2-seater carriage at the back, a flat-bedded cart is attached to the cycle. Madhu and I sat on 2 ends of the cart behind the cycle-rickshaw driver, facing forward, while our luggage was piled behind us. The ride was fun and took us through a fabulously beautiful country-side that had clean roads, large fields and quaint homes – it was the best part of our trip! We were dropped off at the village of Pakhirala from where we took another Re.1 boat ride across to the island of Sajnekhali, our final destination! It had been one hell of a tiring morning!

After checking into the lodge (which is a 2-minute walk from where the boat dropped us off), we had a late lunch and then snoozed for a while. All visitors must obtain a permit to stay from the tourism office, which is located near the ferry docking area. So in the evening, we got that done first. We then talked to the manager of the lodge and had him arrange a full-day boat-cruise for us around the Sunderbans National Park for the following day. With nothing else to do that evening we walked over to the small turtle and crocodile ponds that are close to the lodge. We spotted one turtle but no crocs – they were rather sad looking ponds. A brand new ‘Interpretation Center’ has been built on the island but it was closed for maintenance so we couldn’t check it out. There’s a tall watch tower at the back of the lodge with views out to the mangroves. It provides a possibility of spotting some wildlife but we spotted none!

The following morning we woke up early, had an early breakfast 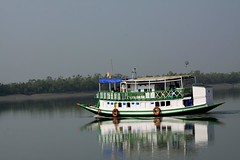 and found the boatman waiting to take us on our day-long cruise. The three of us walked over to the tourism office where we were given an additional permit for docking at the 3 islands we planned to visit during the day. We were soon joined by a wildlife guide who accompanied us on the cruise. By the time our boat (a large launch!) pulled away from Sajnekhali it was 8am and we looked forward to an exciting day of wildlife spotting and gorgeous scenery! Sadly, it didn’t really turn out that well¦

Spread over 10,000sq.kms on numerous islands, only 40% of the Sunderbans ecosphere lies within Indian borders. Even then, this is a vast area to explore. When we had cruised through the Pichavaram mangroves on a paddle boat, we could go into the narrower water channels between the mangroves and observe them up-close. Here, on a large launch, we could only stay far away from the island coasts 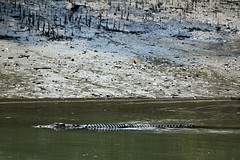 in the broader channels of water, which soon got quite boring. Moreover, we hardly spotted any wildlife. We had been warned by guidebooks and fellow travelers that spotting a tiger was very, very rare in the Sunderbans. Even our guide mentioned that he had spotted a tiger only thrice over the past month when he had gone on cruises every single day! So we had very low expectations on that front. But it was disappointing when we only saw one croc, one monitor lizard, a few birds and a couple of deer in the 4-hr morning cruise.

The whole-day boat cruise includes stops at wildlife-spotting watch towers on 3 islands: Sudanyakhali, Dobanke and Netidhopani. At the first one, we saw many boats marooned at the dock, which meant that a lot of people were probably atop the watch tower. Sensing that there’s no point in trying to spot wildlife along with such a large crowd, we didn’t stop there and instead continued on to Dobanke. This island has a ‘Canopy Walk’ of sorts where we could walk about 100m into the forest on a raised, fenced-in, bridge. This was interesting but not too exciting. Fellow visitors were busy talking loudly and taking loads of pictures of each other excitedly. In such commotion there was no way a tiger or a deer would have walked anywhere close.

The same thing happened in Netidhopani too. This island is furthest from Sajnekhali, is part of the Tiger Reserve’s core area and therefore has the highest probability of spotting a tiger. But here the watch tower has been built right by the living quarters of the forest staff. So in addition to the noise generated by visitors, there was that created by the staff that was washing utensils and clothes out in the open. Madhu and I sat atop the watch tower for about half an hour and then gave up.

Disappointed with how the day had progressed, Madhu and I dug out our books and spent the afternoon reading as the launch cruised back to Sajnekhali.

Along the way, two fishermen on a paddle boat came alongside our boat and sold a large fish to our guide, who bought it for his daughter who lives in Calcutta and misses such delicacy. As the afternoon heat melted away and the weather turned quite pleasant, we spotted many deer and lots more birds than we had in the morning. We totally enjoyed this last hour of the cruise before getting back to the lodge by around 4pm.

The following morning we started on our long journey back to Calcutta. This time around, though, after the 2 ferry rides and one cycle-rickshaw ride, we took a cab from Godkhali all the way back to Calcutta; it was much more comfortable than the alternative: 2hrs each in an auto and a bus!

Overall, our Sunderbans trip was a bit of a disappointment. We experienced none of the thrills of wildlife spotting that we had had in Bandhavgarh nor was the landscape very exciting. But, at least, it has been ticked off from our ‘must visit’ list.