Holi Festival : Celebrating the victory of good over evil

Holi is not just limited to colors. It is true that Holi is a Festival of Colors but in its roots, this festival celebrates the spirit of victory of good over evil. It reflects the ancient Hindu religious belief that unadulterated faith and devotion to the almighty leads to salvation that can be attained by everyone.

The festival has a mythological and religious base that ties the celebration of the festival with its unique concept despite the fact that different places may have different traditions for celebrating it. What makes Holi unique in India is its spirit of joy and brotherhood, its unique expression of love and its mesmerizing colors which manage to wipe out the demarcating lines between people.

Religious and Mythological Base of Holi

Holi is based on several legends. The most popular of all is related to the mythical and legendary Hiranyakashyap, who was a Demon King. After being granted a boon by Lord Brahma, he could not be killed by animal or man, by shastra (specialized knowledge) or astra (weapon), during night or day, inside or outside of house and in sky or on earth. Once granted this boon, Hiranyakashyap turned arrogant and demanded that everyone should worship him. Prahlad, his son, did not listen and continued to worship Lord Vishnu with utmost faith. The Demon King tried to kill his son by various means but failed and finally called Holika, his sister and ordered Holika to sit on pyre with Prahlad on her lap. Prahalad was also granted a boon and could not be killed by fire. Prahlad went into fire with Holika but Holika was burned to ashes instead of Prahlad. Prahlad’s salvation is today celebrated as Holi. The festival was once known as Holika after the Demon King’s sister.

Rituals and Colors of Holi

Holika Dahan marks the beginning of the Festival of Colors. 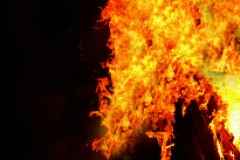 In this ritual people light up bonfires at crossroads and open fields to commemorate the salvation of Prahlad and the end of Holika. It is also homage to Agni Devta (Lord of Fire) – people offer harvest stalks to the bonfire with humility and faith. The ash of the bonfire is considered sacred and people apply it on their forehead with a faith and belief that it will keep away evil forces from their life.

The next day, people use water guns and balloons to splash colored water on each other. There is no boundary, no restriction and no anger. Men, women & children and young & old participate equally. The word ‘stranger’ ceases to exist that day and no one minds if a stranger throws some colored water at them. Abeer (also called Abir or powder color) is also used and thrown at each other. The air fills with a bright spectrum of colors. The mundane and gray roads come to life with different shades of color. It becomes nearly impossible to recognize people because of the colors. Holi is also associated with singing, dancing and mouthwatering delicacies.

Holi marks the onset of spring. Spring is a time that is generally associated with health problems like cold and viral fever. The power colors are traditionally made of medicinal herbs like Bilva, Haldi, Kumkum, and Neem. Throwing Abeer in air and smearing others with these powder colors help to prevent these health issues. Though in recent times synthetic colors are more commonly used.

Holi is celebrated on the day of full moon in Phalgun month (Hindu calendar). As per Gregorian calendar Phalgun is the month of March.

Other Names for Holi

Ahmedabad is popular for the Matka or pot 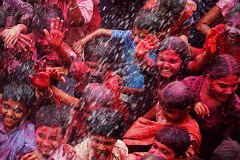 breaking event. A pot is hung high on the streets and boys form a human pyramid and try to break the pot while girls throw colored water at them to stop them from breaking it.

Uttar Pradesh is known for Lath Mar Holi where men get a friendly beating from women with sticks while the sideliners break in hysterical laughs and sing songs.

Holi at Uttarakhand is about music and dance where men and women get into their traditional clothes that reflect the true spirit of colors.

In West Bengal icons of Radha and Krishna (Indian Deities) are taken out on streets on well-decorated palanquins. Music and dance combined with white and saffron clothes form the major attraction. Basantotsav of Shantiniketan (home town of Nobel Laureate Rabindranath Tagore) is the most popular holi event in West Bengal.