Kumbh Mela is the lyrical and eternal flow of life, a confluence of humanity and nature, a source of energy where faith endures endless miseries. It is the world’s largest human gathering where millions and millions of Hindu pilgrims gather at one of the four auspicious locations in search of salvation with unshakable faith that no language in this world will ever be able to describe in words. Kumbh is a Sanskrit word for ‘pitcher’ (also known as Kalash in Hindi) and Mela is a Hindi word meaning ‘a fair’ or ‘a meet’ or ‘a gathering’.

The Myth behind Kumbh Mela
According to Hinduism, after 1000 years of Samudra Manthan (churning of the sea) by Gods and Demons (Asuras), the Amrita or the elixir of immortality was brought by Dhanwantari in a Kumbh. 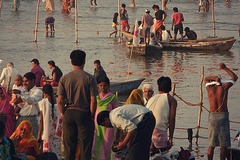 Gods did not want to give that to Demons and conspired against them. The Demons learned about the conspiracy and chased the Gods for 12 days and 12 nights. 12 days for Gods was equal to 12 years for humans. During this chase, four drops of Amrita fell on four places – Nasik, Ujjain, Haridwar and Prayag (now renamed as Allahabad). Since then Kumbh Mela is held at each of these places every 3 years.

What happens at the Kumbh Mela?
Kumbh Mela is associated with ritual bathing. Pilgrims bathe at banks of the holy river that flows through the 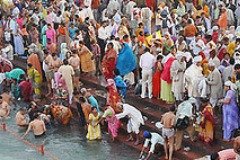 place where the Kumbh Mela is held. Apart from this, the Mela is also associated with mass feeding of poor and holy men. Another important event of the Mela is the religious assembly where religious doctrines are debated, questioned and then standardized.

Holy Rivers are Associated with Kumbh Mela
At Haridwar, the holy river is the Ganges or Ganga. At Nasik, it is river Godavari. At Ujjain, it is river Shipra and at Prayag or Allahabad, it is the Sangam or confluence of three rivers Yamuna, Ganga and 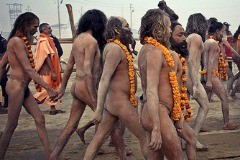 Who participates in Kumbh Mela?
Kumbh Mela is not for a particular section or strata of society. It is open to all – rich and poor, men, women and children, young and old all participate equally. Saffron clad sadhus with vibhuti ashes dabbed all over their body speak of Hindu traditions. Naga Sanyasis attract a lot of attention at this mela. Naga Sanyasis are ascetics who stay stark naked even during extreme winters. 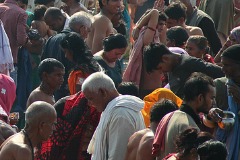 One Response to Kumbh Mela Festival