Get Inspired! by Adventures With Dan

Fed up with your 9-5? Do you feel like getting out of the rat race and going off on your dream trip? Need inspiration?

Rest assured, you’ll find plenty of that in our Get Inspired! interview with Dan from AdventuresWithDan. 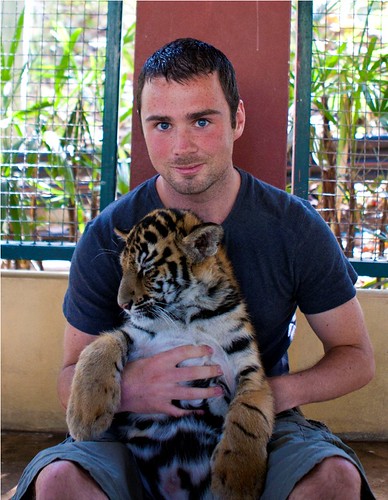 Dan is a 21 year old from the UK who just can’t seem to make up his mind about what he wants to do. He has tried his hand at retail work, photography, web design, drawing, tattooing, and online marketing¦the list goes on and on! In 2009 he realized that there’s only one thing he truly loves – TRAVEL. So he decided to break away from his usual routine and see a bit of the world.

He is currently back in UK on a break before heading to New Zealand.

What made you embark on a trip like this?

I was fed up with my 9-5 job. It was the same routine over and over again. The weather was miserable, the people were miserable and the scenery was even more miserable! Fortunately my work led me to contacting a few travel bloggers (shamefully I worked in the SEO/ online marketing area, so my job was to annoy the travel community asking for ads!). But after reading a few blogs I was bitten by the travel bug. I handed in my notice, sold a lot of my things and set off to live in Australia. After being there for a year I had the choice of staying for another year or packing up to see someplace else. To be honest I become a little bored staying in one place so I booked myself on the next plane out and headed to Asia.

Tell us about the work that went into planning a trip like this.

I guess it’s a little different for me compared to other bloggers as I’ve always had savings so I didn’t really need to start doing anything different. However, as I’d never done anything like this before the first thing I did was read a few blogs on the places that I was going to. I found out all about the hotspots, the ‘must see’ areas and also the ‘avoid’ areas or warnings. Speaking to people that have been somewhere before gave me some really good ideas and tips which made things a hell of a lot easier. Before I left one country I’d always arrange my first lot of accommodation too. There’s nothing worse than getting off a airplane feeling tired & dirty and then having to search for someplace to stay. Getting your first lot of accommodation sorted can relieve a lot of stress – Trust me! If you’re planning on going for a while then I definitely recommend saving up a decent amount of money before you leave too. You don’t have to sell everything you own, but it’s a good excuse to get rid of the junk you never use. Maybe try the cheaper countries to travel to first, get used to travelling and living on a budget. Once you’ve gotten used to living on a budget I’d attempt the more expensive countries like Austraila.

If you could go back in time, is there anything you would like to change since the time you started planning this trip?

I would have bought a smaller backpack. I’ve hardly worn some of the things I took with me and I generally wear the same things over and over (after giving them a quick wash of course). But there’s definitely no need to have such a big backpack. It just weighs you down and takes up so much room while travelling. I’ve gone from an 80L down to a 60L but even then it feels a little big.

How do you go about researching about your next destination?

Generally I go off with what people have told me. Talking to people on Twitter helps a lot as so many people on there are willing to share their experiences and give good advice. Failing that, reading travel blogs is probably the best way you can go. Most of the blogs you read will give open and honest opinions whereas information websites are usually commercially written and will skim over all of the bad points. Speak to a range of people and get their opinions before you go!

If we were to open your backpack, what would we find?

Socks! Lots and lots of socks. I can’t stand having smelly feet. To me there’s no better feeling in the world than putting on a fresh pair after you’ve been walking around all dayI realize that that makes me sound kinda weird. I’m also a safety freak and very accident prone so I have the world’s biggest first aid kit. Most people laugh at me when I show it to them but they usually end up coming to me for something. Other than those it’s the general items that everybody carries: clothes, toothbrush, camera, passport, deodorant!

Tell us about your Aha! moment.

Meeting people that I normally wouldn’t meet! I’ve shared a bed with an Australian, had a drinking contest with a German, taken a Klong boat tour with an Italian, had a conversation where none of us knew what the other was saying with a Spaniard, a flexibility contest with an Irish man and an all night drinking session with an American. The fact I meet so many new people from around the world each day is just awesome.

… your ‘Should have listened to Mom!” moment.

Leaving my bank card in Brisbane Airport (Australia) and not finding out about it until I was in Thailand with no money. My Mum always says œcheck you have everything 3 times, and then check again once more for good measure – yeah, thanks for that Mum!

… and finally your ‘Somebody kill me now’ moment.

In Australia my hostel room was next door to the bathroom and I decided to have an early morning shower before everybody else woke up (6am). My brain obviously wasn’t functioning properly as I didn’t take a change of clothes or my key card to get back in to the roomsuffice to say I was standing out in the corridor butt naked wearing nothing but a towel for at least an hour while I waited for somebody else to come out and let me in. I felt bad knocking and waking everybody but after an hour I just had to.

Tell us about the interesting folks you have met on this trip?

Like I said I’ve met people from all over the world and still keep in touch with many of them. Aussies seem to be my favorite people at the moment simply because of their laid back attitude – everything is no drama to them!

How has the trip changed you as a person?

I’m so much more outgoing now. Before the trip I wouldn’t really get involved in things. I’d keep to myself and get on with my own life, but now you can’t stop me from doing things! I’ve just arranged a ‘tweetup’ with a group of bloggers, I’ve been on stage in a few competitions and I’ve sang karaoke to a packed bar on New Year’s Eve! I love it!

Complete the sentence œAfter this trip, I now know I can¦

Three posts from your blog which would inspire our readers to jump off the fence.

What did you miss most about ‘home’?

What are your thoughts on traveling solo as opposed to traveling with a partner/friend/group?

Travelling solo is my preferred method now! I’ve tried both and going with a friend was the worst experience I had while travelling. They didn’t want to do anything apart from sit around the hostel. I felt bad leaving them on their own so a lot of the things I wanted to do I didn’t actually get to do. Going solo you can join other travelers, but at the same time you can choose not to go with them or go off without them and not feel bad about it.

Well I’m actually at home right now. I’ve come home for a few medical reasons and my mother is getting married tomorrow, but I’m aiming to be back in Asia in the next few months. It’s my 21st Birthday in a few weeks so I’m sticking around for that and then it’s one of my parent’s 50th Birthday. But once those are out of the way I’m jetting off again – I can’t wait!! I want to make it to Africa at some point too¦

Any advice for our aspiring vagabonds?

Just do it. Don’t thinkjust do it! Well ok, do think a little, but still, just do it! You only have one life, don’t waste it doing things that you don’t necessarily want to do. Who cares about the flashy cars, big houses and posh furniture! When you’re lying on your death bed in many years to come, would you rather look back and think œI’m so glad I had all of those nice things in my home that I’ll never see again or would you want to look back and think œhey, I’m glad I explored the world. I did what I wanted to do and had some of the best experiences of my life¦ – I know which one I would pick!

Thanks for dropping by! Feel free to join the discussion by leaving comments, staying updated by subscribing to the RSS feed, or by following us on Twitter & Facebook.

2 Responses to Adventures With Dan