Onir is an Indian film director, editor, writer and producer. He is best known for his film My Brother…Nikhil, one of the first mainstream Hindi films to deal with AIDS and same-sex relationships.

In an exclusive interview with 10 Year Itch, Onir talks about traveling in India during his formative years and how it influences his work.

Tell us about Anticlock Films. What is it about? How is it different from the other Production Houses

After having produced My Brother Nikhil in 2005, Anticlock Films was set up in 2008 by Sanjay Suri and me as an independent film production company with their first production Sorry Bhai . The idea being to produce films that we believed in and were passionate about. Anticlock stands for being Timeless. We believe in making films that are progressive, meaningful entertainment.

In 2011, Anticlock Films spearheaded a unique experiment in new age cinema with the announcing of the production of the film I AM which became India’s fisrt truly crowd sourced and crowd funded film with over 400 co-owners from 47 cities across the world coming together to make this film. I AM was released in April 2011

Currently Anticlock Films is producing two feature films Chauranga to be directed by debutant director Bikas Mishra and Shab to be directed by me. Anticlock films vision is to produce, market and distribute content driven independent cinema in India.

What time in life did filmmaking cross from a hobby to something more serious?

Ever since I was in class eight that’s about 14 years old the only thing I wanted to do was make films.

How does travel influence the work you create?

I think having traveled a lot during my formative years, I have grown up to be a very independent and liberal in my thought process and I think that somehow reflects in my work. My travelling now has a lot to do with attending film festivals and that teaches me to look at my own work from different perspective and also exposes me to world cinema.

When do story ideas usually hit you?

It could be from a book, a conversation, a news item or something that happens to me.

How did the idea for the movie I AM come about? 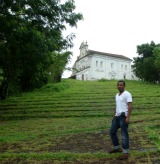 All the stories of I AM are inspired from real life stories that I have read about or have experienced directly or indirectly. The reason for doing them as short stories and not a single feature film was purely financial. I know I could more easily raise finance for each story separately if they were short stories.

While on an outdoor shoot do you get time to play tourist?

One does that when one goes for script research and location hunting….. not during the shoot. But suppose in a place like Mauritius even if u are shooting, you cannot not take small breaks to enjoy nature.

Have you been to any place while traveling or on a shoot where the people made a distinct impression on you? 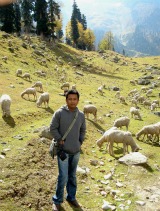 Yes, I think it was Srinagar…. People were loving and warm but always complaining about how miserable their lives were compared to India. And apart from the political turmoil I think people were far better off than most of India breathing clean air, having food and clothes and a home. It also made you feel strange to be considered as “outsider” in a place that’s supposed to be a part of your own homeland. I was amazed to realize how little space people have to voice their opinion that did not suit the separitists.

What was your most recent travel experience ? And where do you want to go next ?

My recent trip was work related to Jhamshedpur in Jharkhand. It amazed me to see how rich the land was and realized and felt sad that the land’s richness is being harnessed by a few while the majority suffered.

I want to make a road trip to Ladakh from Mumbai via Rajasthan.

What is your next project about?

My next film Shab is a love story between a young man and a call girl set in Delhi.

Your best piece of travel advice?

Carry basic first aid, learn to read a map, travel light and learn to explore the place & culture through the local cuisine. And to get a true flavour don’t spend too much time in touristic locations but really walk around the city.