Kiran Keswani is an Urban Planning researcher who lives in Bangalore, India. She is currently studying the Informal Plan of the city using the context of the marketplace. She writes about traditional marketplaces at Indian Bazaars.

What is the best part of traveling in India?

For me, the best part of traveling in India is going to the bazaar in any town or city I visit. India has such a unique Bazaar culture. There is a simultaneous complexity and commonality embedded within the bazaars. In so many places, there are the colourful flowers entering the market with every break of dawn; the flower vendor spaces are inextricably woven with the vegetable vendor spaces, street corners become either a confluence of both or the receding of one; there is the emergence of an entire streetful of kite makers a month before Sankranti (harvest festival) or the rising crescendo of firecracker sales as Diwali (festival of lights) draws near. Every bazaar is different from another. 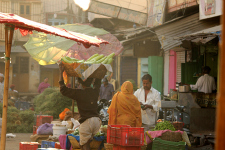 Tell us about your most memorable travel experience?

I had just begun to meander that morning by the Pichola Lake wanting to simply walk along the streets of Udaipur city in that light that I had discovered the day before, a light that seemed to belong only to the morning, the light that fell on the Lake Palace, creating most of its charm, the light that let the water dance on the walls of the many pavilions beyond. I stopped an autorickshaw driver to ask for directions. He said that it was only the Mandi (market) that would be open at this hour. I decided to go there and got into the autorickshaw. We were soon there.

As I stood within the mandi and its people, I looked around. There was a mist in the air and through it the sun came into the street. Women vendors were unpacking bundles of greens and sacks of tomatoes. It was such a quiet market square at that blissful hour of the morning. Few people spoke to each other as they arranged their goods. In one corner, children played and chatted with each other. I looked on. There was something about that morning that told me that there was more quiet in the world than I knew.

What has been your favorite culinary experience?

In India, it can be every day, another favourite culinary experience. My most recent has been eating Maharashtrian food at a small restaurant called Peshwa in Bangalore. It had the most delightful Jhunka-Bhakar and stuffed brinjal. It was just the sense of familiarity, I guess, with food I had eaten before, many, many years ago. It was like the food critic, Anton in the film Ratatouille, eating his favourite dish that brings back to him memories of his mother’s cooking.

Which is your absolute favorite place to visit in India? And why?

A place that I would go back to again and again maybe? It would be Udaipur. I love walking the streets there and the food is gorgeous! What I like is to be at one terrace restaurant or another every evening and to look at the city across the houses, across the terraces, with some parts of it in light, and others not.

Tell us about the places you have been to which is off the beaten track.

There was a beautiful, little place we discovered as we were returning from Kedarnath in the Garhwal region. There was a GMVN guesthouse and we decided to stay there for a day. You could climb down a few steps from the cottages and you were right by the side of the river. I can still remember the unending floor of white and grey pebbles we walked on, as we listened to the river flow by.

How does travel affect you as a person?

In the midst of chaos and crowded streets anywhere, you find yourself becoming more thoughtful. It reminds me of these lines from one of my favourite books, Tagore’s Fireflies¦The world is the ever-changing foam that floats on the surface of a sea of silence 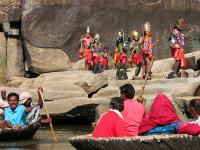 Any advice for those planning their dream trip to India?

It may be nice to get a glimpse into India and its people as you plan your trip and reading R.K.Narayan’s writings is a wonderful way to do it. He is a writer who wrote as if he was enveloped in quietitude, situated in an Indian setting which could have been everything but quiet! He seemed to have read deep into the minds of people in his family, in his street, in his town and in his country.

R.K.Narayan is one of my favourite Indian writers writing about India. With his acute sense of observation, R.K.Narayan must have seen also the darker sides of India, but he did not write about that. His essays chose instead to dwell on simple people and their simple ways. In ‘The Crowd’, he writes, Any crowd interests me: I always feel that it is a thing that deserves precedence over any other engagement. I always tell myself that an engagement can wait, but not the crowd. 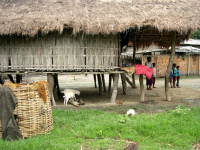 Which places would you recommend for someone coming to India for the first time?

For a first time, I would recommend Bombay as the point of entry and departure and then, it can be Hampi, it can be Assam, it can be any place in India. I find that for most travellers, Bombay is a place where you walk down the street and feel that this is Indian, and yet, you could be someplace not India, just because you found a cafetaria at a street corner that reminded you of home.