Get Inspired! by Sharell Cook 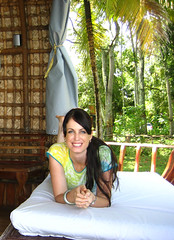 Do you wish you could quit your boring 9-5, live in a different part of the globe, have a job which lets you travel, be one of the most popular Expat Bloggers out there, and top it off with a book about this amazing journey?

Need inspiration? You will find plenty of that in our Get Inspired! interview with Sharell Cook.
Click here to buy Sharell’s debut book, Henna for the Broken-Hearted.
Savi’s review of the book.

Tell us about your journey from being an Accountant in Melbourne to a Travel Writer / Blogger living in Mumbai?

The saying that change doesn’t happen overnight is right. The journey was a long one — more than two years in total. And two years of not knowing where I would end up! It involved a personal crisis (which is always good for bringing about change), 6 months paid long service leave from work, a trip to India to do some community work in Kolkata, falling in love, getting an offer to look after a guesthouse in a beach town in Kerala for the tourist season, an “aha” moment when I read an advertisement for a writing course and realised I wanted to become a writer, further wandering around India trying different things (working on a Bollywood set, opening a shop), a marriage proposal, a move to Mumbai, and humble beginnings writing freelance India travel articles.

How did the change in career happen? Was it intentional or things just started falling into place

I was never satisfied in my career as an accountant. I’m a creative person and the environment didn’t suit me. The only thing I enjoyed about my work was research and report writing (and long lunches because I worked for the government!). However, I was totally clueless about what else I’d like to do. Plus, I thought I was too far into my career to start over. It was a very comfortable and stress free job. I wasn’t a risk taker and hated change. The crisis forced me to revaluate my life but I doubt I would’ve made any drastic decisions — if it wasn’t for my trip to India propelling my life off in a whole new direction. So, I guess you could say that things just started falling into place. Doors opened and I went through them. I was fortunate that because I’d worked for the government, I was entitled to 6 months long service leave at half pay. I also had plenty of savings. This allowed me to just go with the flow. I made the decision to say yes to what ever opportunities came up. However, there were plenty of times I wondered where it was all leading, and whether I’d ever find my purpose in life.

If you could go back in time, is there anything you would like to change?

I would’ve been more careful about who I let stay in my house while I was away!

How did your family and friends back home take to your decision to move to India?

It was very mixed but I eased them into it. I didn’t just say one day “I’m moving to India!”. It was done in stages for my sanity too. I don’t think I could’ve coped with such an abrupt change. Rather it went something like this: 5 weeks in India, 1 month back home; 3 months in India, 2 months back home (where I even returned to my accounting job when my leave was over, to try and make a go of it, but ended up taking the plunge and quitting); 1 year in India, 5 months back home; then finally the move to Mumbai. BUT I still had a home full of belongings back in Melbourne waiting to be sold off or packed up. It was kind of like my security blanket. After I’d been in Mumbai a year, I went back home and at last finalised everything there.

Tell us about your ‘I should have listened to mom’ moments …

My whole first year in Mumbai was like a continuous “I should’ve listened to mom moment” (except my mum was one of the people encouraging me to move there!). Even though I’d been in India for a couple of years beforehand, actually settling down and living in a housing society is a lot different to traveling around and staying in tourist places. The culture shock was immense. Mumbai was so crowded and dirty. Middle class standard of living was very different to home. I had to get used to a cramped one bedroom apartment, instead of the open spaces of Australia. The neighbours were extremely nosy, not used to having a white person in their midst. I felt like I had no privacy, people turned up all the time on unannounced visits. Or they didn’t turn up when they were supposed to. The internet (which I needed for work) was often dysfunctional. To be honest, if I didn’t have a job I loved, I would’ve most likely fled back to Australia. It felt like India and I were waging war on each other, and of course, India (which doesn’t change for anything or anyone) was winning. Then there was the terrorist attack in Mumbai which left me very disturbed.

How has the past few years changed you as a person?

I’ve become a lot more relaxed and easygoing. I used to be such a control freak but there’s no place for that kind of behaviour in untamed India! I’ve learned the art of patience and acceptance. I also worry less about how things will work out. I guess I’ve developed faith in the universe, and know there’s a plan. I think the rewards are there for those bold enough to take a chance. On the questionable side, I’ve also learned that great Indian survival tactic: the art of lying and telling people what they want to hear.

What made you start blogging about your life in Mumbai?

There were a couple of reasons why I started blogging. I realised my life was heading in an unusual direction and I wanted to share it, to help or inspire people. Thinking strategically, I also considered it would be a good platform to establish myself if I wanted to write a book (and it turns out that was the case, because a publisher contacted me after coming across my blog). Blogging is also such a great resource for getting in touch with people, and even getting advice on issues or problems.

Your thoughts on what makes the blog is so popular?

I’m stunned that my blog has become so popular actually! There could be a few reasons for its success. I try and write about what people would be interested in reading about, and try and write in an interesting way. I also write openly and honestly, and regularly. And I like to interact with my readers. I always to try and respond to as many comments and questions as possible. Another factor could be that I’m living a normal Indian middle class life — not that of a high-earning expat, or a foreigner who’s married into an upper class Indian family. Therefore I have a rather unique perspective to share. My life is more “real” to people, and I guess they’re interested in seeing how I cope and adjust.

Which has been your most controversial post till date?

I’ve covered a lot of controversial topics so it’s hard to pick one. Things like racism, Indian inferiority complex, and of course anything that mentions white people (such as white women in Bollywood, or why Indian guys like white women), always provoke a response.

You have a job which we all dream about – Managing the India Travel section for About.com How and when did that happen?

It happened in early 2008, within a month or two of me moving to Mumbai. How it happened still leaves me incredulous and amazed. I can only sum it up as the universe conspiring to provide me with the opportunity. I’d been writing some India travel articles for an article library website. A stranger read a few of my articles, and sent me an email telling me that About.com were looking for someone to write and manage their India travel website and that I should apply. So, I did, and got the job! But I make it sound too easy. Actually, for such positions, About.com chose five applicants and put them though a two week selection process. The applicants compete against each other to prepare the best website using About.com’s tools and content management system. So, I had to learn how to use their system, come up with a layout for the website, and write a whole heap of original content for it. There were a couple of occasions where I worked for 24 hour stretches with barely a break and no sleep. I don’t know where got the energy from. But they chose me! Now I know how much competition there is for positions in the travel channel, I’m even more incredulous that I got the job. It was just meant to be. I’d been telling everyone I was going to India to write, and I ideally wanted my own website, so law of attraction perhaps?

I’ve been fortunate to have some extraordinary travel experiences. The most outstanding (and crazy) one so far was driving an autorickshaw from Chennai to Mumbai as part of the Rickshaw Challenge. It took 2 weeks, and it was during the monsoon season. Fortunately, my husband was adventurous enough to come with me. I’ve also been on a yak safari in Spiti, and had dinner and cocktails with the royal family at the palace in Udaipur.

If we were to open your travel backpack, what would we find?

I always take a notebook and camera. And some hand wipes (antibacterial if possible)… never know when they’ll be useful.

What did you miss most about Australia?

Quietness, fresh air and open spaces! Fish and chips on the beach. And just being able to get in my car and go for a drive. We don’t have a car because it’s too much of a hassle in Mumbai. Traffic is so bad and there’s nowhere to park.

So, what’s next? Anything interesting in the pipeline?

I’ve written a book about my whole journey from crisis to reinventing my life in India, getting married, adapting, and settling here. You could call it a cross between “Eat Pray Love” and “Holy Cow”. It’s being published by PanMacmillan Australia and will be out in late 2011.

, is now out and getting a lot of fabulous reviews. Click here for more information.

Any advice for our readers who want to break out of their comfort zone and experience life to the fullest?

As scary as it might seem — just go for it and take the chance. I’m the most unlikely person to have done what I did. I still can’t quite believe it actually (and just to confess, I even went to a psychotherapist to check that I was thinking rationally and not making some awful mistake), but I survived and even succeeded. For those who like reading, there’s a book that really helped me over the hurdle. It’s called The Dream Giver, by Bruce Wilkinson. (A colleague gave it to me, and I’m forever grateful).

One Response to Sharell Cook (Interview)