Buddhist Circuit in India : Following the footsteps of the Buddha

While the historical Buddha was born in what is now southern Nepal, he spent most of his adult life first wandering—and then teaching—in the plains surrounding the great, holy river of northern India, the Ganges. Buddha himself specified four places from his journeys that his future disciples should visit with a ‘devout heart’, indicating that such a pilgrimage would help them to make progress on the spiritual path: his birthplace, Lumbini, now in Nepal; the site of his enlightenment, Bodhghaya; the place where he initially ‘turned the wheel of dharma’ and delivered his first public teaching, Sarnath; and Kushinagar, where he departed his earthly life and attained parinirvana—the full awakening one realizes upon release from the cycle of suffering and rebirth.

Today, Buddhists from all over the world, as well as travelers interested in the ancient history and culture of India, travel this pilgrimage buddhist circuit as well as to other sites in India associated with the life and miracles of the Buddha such as Sravasti, Rajgir, Sankassa and Vaishali. Even with today’s modern transportation and conveniences, it takes some time and planning to get to many of these sites—so one can only imagine what it must have been like for pilgrims more than two millennia ago. Still, these sites have remained despite the ravages of time, and continue to be venerated.

By way of example, let’s look at Sarnath. Originally known 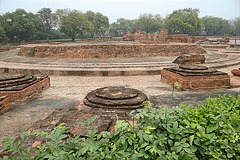 as Mrigadava, “deer park”, Sarnath is the place where Buddha taught his first sermon to only five disciples, and where he remained during his first rainy season as their numbers slowly grew. The spot is memorialized to this day in large part because of the efforts of Emperor Ashoka in the 3rd century BCE. The leader of an empire stretching from Afghanistan to Bangladesh and south to Kerala, Ashoka converted to Buddhism after reflecting on his warlike ways, and decided to build stone memorials at the various pilgrimage sites. Even now, Ashoka’s monument 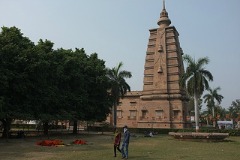 marks the place where Buddha first sat to teach.

Sarnath became a great monastic center for the next 1500 years, sponsored by subsequent wealthy rulers and traders. Around the 6th century CE the Dhameka Stupa was built on the site of an original stupa placed by Ashoka. Towering more than 100 feet, this great stone structure still remains despite Sarnath being razed by the Turks in the 12th century. Considered the spot where the Buddha’s voice was first heard, pilgrims can be seen chanting and circumambulating the stupa every day. On the grounds you will also find the excavated ruins of various eras of monasteries, and in this one place, one can see the birth, flowering, and decline of Buddhism in India.

For the faithful, these pilgrimages sites are reservoirs of spiritual energy that can still bestow blessings, and for the secular visitor, they are fascinating archeological records and places to observe the living practice of Buddhism. Any are well worth visiting as few people, no matter their own spiritual leanings or lack thereof, fail to be moved by the compassionate presence remaining in these ancient places.