Monisha Rajesh is a London-based journalist writing her first book, Around India in 80 Trains. She has worked on the features desk of the London Evening Standard, and written for the Telegraph, the Guardian and TIME magazine. 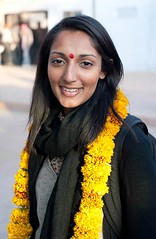 What was your inspiration for embarking on the 80 Trains journey?

I was sitting at my desk at TIME magazine in London, my mood as grey as the weather, when I came across an article detailing how India’s domestic airlines could now reach 80 cities. It was almost twenty years since my family had tried to move back to India to settle, but after two traumatic years in Madras we had made a hasty retreat back to England. India and I had parted on bad terms and little more than the occasional wedding had lured me back, but I always knew my curiosity about the rest of the country would get the better of me. Leaving a gargantuan carbon footprint behind eighty flights was hardly the way to go, but the railway was so immense, threading its way across the length and breadth of the country, right to the tips of the country’s landmass. And as quickly as that, I decided to travel around India on 80 trains.

Tell us about the planning which went into preparing for a trip like this.

Your readers might be appalled to read this, but next to none. India is not a country that lends itself well to organisation and punctuality and trains are often delayed and rescheduled due to landslides, monsoons or a family of cows on the tracks. Detailed planning was abandoned in favour of picking out a wide variety of trains from Mumbai commuters to the Indian Maharaja, and the Darjeeling Toy train to the world’s first hospital train, along with specific points of interest: a solar eclipse in Kanyakumari; a dance festival in Khajuraho; Kanchenjunga at dawn. I knew I wanted to write a book about the journey and rigorous planning would have stripped out the serendipity of travel. The best stories arose when I followed my nose and instincts. That said, I did make sure I had unlocked mobile handsets to buy local SIM cards and did all that boring stuff like getting visas, which for some bizarre reason, people forget you need for India.

What makes riding on trains in India so special?

In the West the train traveller looks out on the world as it flits past the window. In India it’s a two-way mirror. 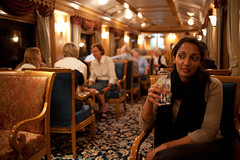 There’s as much going on inside the carriage as there is outside. Travelling great distances on Indian trains is like sitting in one long, cosy living room. Blanket-wrapped ladies feed kids from tiffin carriers, gossip passes between overhead berths and cross-legged I.T graduates play rummy on briefcases. Mobiles charge, laptops shriek bootleg copies of 3 Idiots, and nappers snore behind curtained compartments, oblivious to the clamour. It’s a friendly confusion in which you can blend, or quietly observe. My favourite part of Indian train travel is being able to hang out of the doorway as the train blasts through mango groves and coconut trees and over rivers, or creeps through the backs of villages, inches from families unwinding for the day.

Which has been your favorite train journey so far? 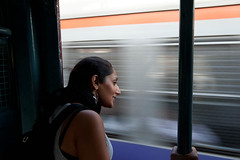 The train stops for about four weeks at locations with limited access to doctors, and patients are invited on board for orthopaedic surgery, treatment for hearing and visual impairments and cleft lip repair. In a country that claims to be ‘shining’ and paving the way for the rest of the economic world to follow, it was shocking to see the way in which the majority of the country still lives. We spent a week on board with volunteer surgeons who did tireless work to fix the kind of afflictions we don’t even see anymore in the West, most of which could be avoided with simple procedures. It illustrated to me just how much the Indian Railways deserves its nickname as the ‘lifeline of the nation.’

Did you travel continuously or did you take breaks in between to catch up on writing?

Continuously. I took a tiny laptop and bought an Internet dongle when we landed so that I could blog onboard and write articles for magazines and papers in England. I carried a fat English Patient-style logbook with me but that was more for long musings, or moaning to myself about missing Mad Men and bacon sandwiches. The best way to keep notes while travelling is with plenty of tiny notebooks where you can jot down wonderful quotations, the smells and sounds of a carriage, the tone of a voice, or the colours of flowers on a specific tree, then piece them together later. Noting things as and when they happen is the best way to document, then you can colour your writing later.

On a 28-hour journey from Delhi to Chennai, I shared a compartment with a member of the Lok Sabha and his two friends, who were en route to a wedding in Vijayawada. 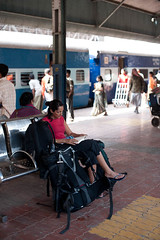 Ledo in Assam, the easternmost tip of the railways, came up in conversation and they offered to organise the trip for me. After swapping details, they got down at Vijayawada and a lady in the adjoining compartment glanced across. All train talk, she said, dismissively. What makes you think that? I enquired. Simply timepass chat, she replied, going back to her pickle and rice. Four weeks later I arrived in Assam and was greeted by the deputy superintendant of police in an armoured jeep, and housed for free at the Circuit House. If this is what ‘train talk’ meant, it certainly had my approval.

Which is your absolute favorite destination in India?

Lying on a houseboat on the backwaters in Kumarakom staring at the stars was one of the most peaceful moments – which aren’t easy to come by in India. And Jaisalmer in Rajasthan comes a close second. At night the fort shines like gold from the candles and lights within rock cut windows and it’s great fun to watch people going about their business across the rooftops.

How has this journey changed you as a person?

I don’t believe in the existence of God anymore. I wasn’t particularly religious before I went there, but I soon realised that life is a lot more acceptable when we realise that good and bad things happen haphazardly in life and there is no reason for them. If we accept that then we don’t feel so let down when God doesn’t answer our prayers and we can learn to take responsibility for our own wellbeing than placing it in the hands of an unknown entity. I was appalled at the way the poor were exploited and the enormous discrepancy between the way people lived. India has some of the richest people in the world and yet has more poverty than the whole of Sub-Saharan Africa. The concept of reincarnation suggests that each lives this way because of their actions in previous lives, which was not something I could accept.

How about some Indian Railways survival tips for our readers?

Never accept tickets from touts or visit side-street agents claiming they will find you a confirmed seat. Indian railways has one central computerised system and it’s safest to do all bookings at a station counter.

What’s next in the pipeline?