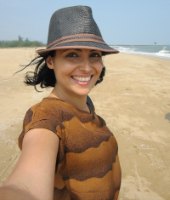 Her latest television series is Go Asia With Anita Kapoor. You can also watch her on Lonely Planet Stressbuster showing across India and Europe. Anita was also the host of season 2 of the successful reality TV series, Can You Serve?

How does travel influence the work you create?

It allows all the stories in my head an outlet and for the creation of new chapters.

Tell us about your latest project.

Go Asia with Anita Kapoor is a five ep series showing on cable channel TLC that takes viewers into five Asian cities and explores each of them through the eyes of local provocateurs. We looked for folks who were changing it up somehow, erasing the status quo, and who are a reflection of New Asia in one manner or another.

While on an outdoor shoot do you get time to play tourist?

I always sneak it in! India is beguiling and haunting all at once. It heaves with people and situations. There is always something happening. I wouldn’t call it being a tourist in the traditional sense of simply gawking and moving on. I always try to get something more out of it – a question, a conversation, a nibble of something new.

Have you been to any place while traveling or on a shoot where the people made a distinct impression on you?

I’m still trying to figure out Bihar. I wasn’t brought up with the stereotypes that various Indian ethnic groups are dogged by.

Tell us about your best culinary experience?

Best? How on earth can anyone choose a single culinary experience in India? It is perhaps the most mind opening cuisine of the world from sheer variety, influence, and still remains largely authentic. I must however reveal a fondness for Parsi and Kerala food.

What was your most recent travel experience? And where do you want to go next?

Delhi and Mumbai, for the show. There are a hundred

places I would like to next visit in India. I’m a huge train enthusiast – I’d like that to be my next trip, cris-crossing India by rail, North, South, East, West, before it all becomes some sort of bullet train system.

What was your favorite souvenir from India?

On my trip for the show: a beautiful silver bangle I picked up while filming in the bylanes of Old Delhi – see, tourist on location! Usually however, my souvenirs are the experiences I’ve had, especially in India. Sitting in a boat in the early morning hours on the Ganga in Varanasi before all the charlatan priests start harassing villagers when I shot my earlier show, Exotic Escapades.

Cycling old Mumbai on “Go Asia with Anita Kapoor”. Visiting my old family helper in Mumbai and sitting on her floor eating parathas.

What is your next project about?

Telling people’s stories. Figuring out how to take my desire to help people to another level.

Any advice for those planning their dream trip to India?

Leave your pre conceptions and stereotypes behind. You will witness both these and the opposite anyway. Eat well. Keep your wits about you. Enjoy the myriad conversations you can have with some of the most fascinating people on this planet. Take your rose coloured glasses off: popular novels and movies tell so little of the Indian story and that too, a version of a version. Visit to question, to understand, not to try and become an Indian for a week.