Get Inspired! by Inspiring Travellers

Feel the itch to leave your hometown and move to a different continent? Need inspiration?

Rest assured, you’ll find plenty of that in our Get Inspired! interview with Andrea & John from Inspiring Travellers 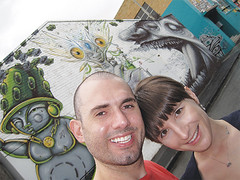 John and Andrea are a nomadic couple, currently travelling the world full-time. They grew up on opposite sides of the world, but both realized in their twenties that the places they grew up were not for them in the long-term. John set off for Europe to work and travel, while Andrea moved around the United States for awhile, travelling abroad whenever she could. And then one day they met each other in a tiny little town at the bottom of Crete.

In 2010 they finally decided to start publishing stories about their adventures and also those of the interesting people they met along the way. Their blog features traveller interviews, stories and inspiration from and for travellers.

What made you embark on a trip like this?

We’ve been living in Melbourne, Australia for the last four years and decided that it was time to move on from there. So we thought it would be nice to do some travel before we relocated to a new city. We’re also thinking about starting a family next year and wanted to see all the places we probably won’t get to when we have a young child

Tell us about the work that went into planning a trip like this.

Deciding where to go wasn’t too much trouble; we just picked all the places we’ve been talking about going since we met. We knew we wanted to book a round-the-world ticket so this helped with the order of things. But weather also played a big part because we knew there were limitations on when we could visit places like Patagonia. We saved for four years for the trip, which involved cutting out things like new clothes and limiting our extra-curricular activities. We also had to quit our jobs, sell items and put our things into storage. Our number one piece of advice for people is to start planning and saving as early as you can and don’t accumulate a lot of possessions because storage is expensive!

If you could go back in time, is there anything you would like to change since the time you started planning this trip?

We think we spent too much time in New Zealand and probably should have come to South America sooner because there is so much to see here. We’re missing out on countries like Brazil and Ecuador, and we would like to spend a lot more time in Colombia than we will be able to.

How do you go about researching about your next destination?

Our information comes primarily from guidebooks, Wikitravel and travel blogs. We use guidebooks to get a general overview of the main areas to see in a country and then fill in the specific information by reading blogs and online travel sites.

If we were to open your backpack, what would we find?

Tell us about your Aha! moment.

Speaking to our friends and family who have kids – everyone says they have no money and feel tired all the time. We knew we had to do it.

… and your ‘Somebody kill me now’ moment.

We went to a seafood restaurant in Chile and the waiter brought out a plate of seafood. It looked raw, but there was ceviche in the middle (which is supposed to be raw). Our Spanish wasn’t very good so we just said ‘Gracias’ and started to eat the food. We thought it was some kind of house appetizer, but when the waiter came back horrified and took the plate away, we realized it was just a platter to show us what they had available. Oops!

So far Chile and Uruguay have had the best food. We also had an amazing meal at Sidart in Auckland. Our worst meal was in Mendoza at a place up the road from our hostel. Stale table bread at the start of the meal should have rang an alarm bell.

Tell us about the interesting folks you have met on this trip?

This year has been pretty disappointing for us compared to all the interesting people we remember meeting on previous journeys. We feel harsh saying that, but it has been quite difficult, especially when we started our blog with the intention of interviewing travellers with interesting stories along the way. Probably the most inspiring people we met were a couple of French guys who started their own travel documentary series and sold it to appear on television in France. They just had a really great attitude and the show was apparently doing well.

Complete the sentence “After this trip, I now know I can …”

Three posts from your blog which would inspire our readers to jump off the fence.

What did you miss most about ‘home’?

Being able to just stay in for a weekend and cook in our own kitchen and relax. It’s hard to find time to just chill on the road and hotel/hostel rooms get old after awhile. We also miss our family and friends, of course!

When we finish our travels in December we will be starting a new expat adventure. We have no idea where this will be yet as it’s completely work-dependent. We’re looking at cities in the Middle East, Europe or SouthEast Asia but we could end up anywhere.

Any advice for our aspiring vagabonds?